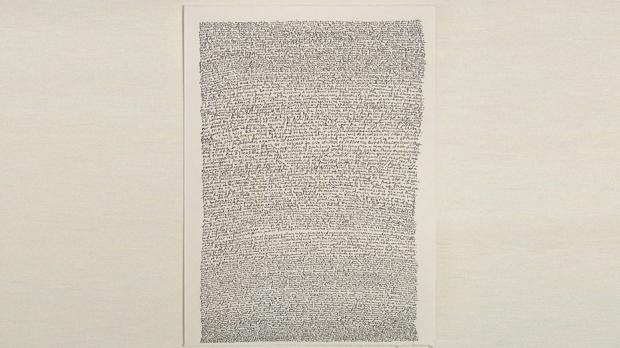 The reason for the sudden appearance of substantial verbal content in visual art in the latter half of the last century, according to creators of the Art=Text=Art exhibit at UB Anderson Gallery, was basically political. Wall explanatory copy talks about Cold War-era anti-Communist and anti-homosexual official propaganda, and the purpose of artists to challenge these conventionalities. Speaking out in words. Though sometimes not too loudly or clearly. Either way could get you into big trouble. Meanwhile, the artists had their own political agendas, on issues from civil rights to women’s rights, plus the Vietnam War. Verbal content amid the visual imagery in paintings was a way to declare articulately on these matters, but with the requisite degree of ambiguity or obscurity in the face of truculent political powers.

An alternative reason would be artistic rather than political. Given the general turn to abstract art in the 20th century, maybe the best way to cue the viewer as to the subject of an abstract work or convey a specific message was by incorporation of text in the work.

Also, the recourse to abstract art in that period seemed to reinvigorate among artists philosophical issues as old as Plato as to what is real and unreal in art and life. The symbolic character of verbal language—and even more so, of the signs used to convey linguistic or mathematical information—were key to exploring these issues for artists and philosophers alike.

The Art=Text=Art exhibit was originally conceived and presented at the University of Richmond, Virginia, but was recast in its present form by UB visual arts graduate students, with additional artworks and written works from the UB Art Galleries and UB Poetry Collection, and elsewhere. It’s a huge exhibit with an undigestible in a single viewing amount of works, and upstairs a score or so of further works from the UB galleries with some connection to the art and text theme.

The main exhibit is divided into three topic areas, viz., the Personal is Political, Systems, and Anti-systems, but the topics overlap and intermix. Nothing is one thing and nothing else. With along the way, excursions into such text plus art genres as artist’s books and concrete poetry (some examples that might be described as more concrete than poetry).

The Personal is Political category features works by gay artists the likes of John Cage (whose work also readily connects with the Anti-systems category) and Jasper Johns (whose work readily connects with the Systems category, and philosophical issues about signs and symbols and art and reality). Two of the more notable works in the Personal is Political section are by Annabel Daou, one of them called Constitution, being a handwritten transliteration of the US Constitution in Arabic script. The recipe for democratic government we’ve been trying for the last few decades or more to impose on various Mid-Eastern populations. (The recipe that seems to be working so well for us at the moment.)

Whereas sometimes the personal is just personal, as in Elena del Rivero’s two hilarious letters to her mother, one a kind of necklace of tiny pearls—such a lovely present from a daughter to her mother—around a buckshot array of the multiply reiterated single word “No.” The other consisting of just a header (“Carta a La Madre”) and footer (“Jávea, Agosto 93”). The entire body of the letter blacked out. (“Redacted” in officialese.)

The Systems category includes geometric drawings by Sol LeWitt, precise areal measurement works by Mel Bochner, and a choreographic annotation diagram on graph paper by Trisha Brown, from which you can visualize a series of sequential movements by a handful of dancers in a zig-zag pattern across the dance space, then maybe reverse and/or repeat.

The Anti-systems category includes more work by Cage, a Cy Twombley scribble and smudge painting/drawing, and Mark Lombardi’s large-format chart of unsavory relationships among the multitude of players in the Charles Keating, Lincoln Savings, American Continental Corp. scandal at the heart of the savings and loan financial crisis of the 1980s. (That has since been dwarfed by a series of bigger and better scandals/fiascos. The legacy of the Ronald Reagan years. His policy to allow the foxes free run through the chicken yard.)

A ton of stuff here, raising a ton of issues to ponder. The exhibit continues through January 11.