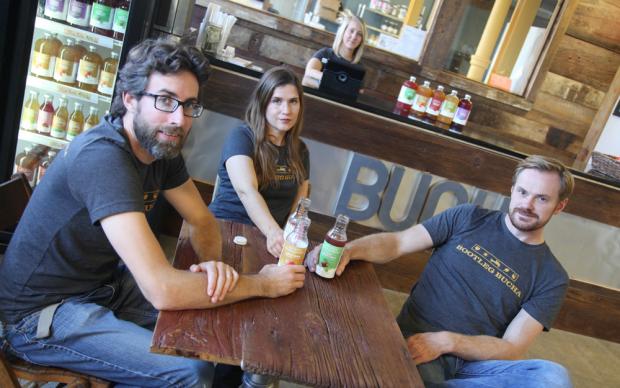 We’ve all heard the cliche that a particular health-food or dietary regimen changed the lives of those who market and sell said product. But local kombucha brewers Todd Salansky and Jeffrey Empric may be among the few who can stake the claim without puffery.

The co-owners of Bootleg Bucha, New York State’s first kombucha brewery, and longtime friends both grew up with ordinary, bountiful diets. Then, out of the blue, their guts seemed to turn against them.

“I grew up [eating] everything, was skinny, and all of a sudden I hit a wall about five, six years ago,” Salansky said. “I would eat something I’d been eating my whole life and I’d feel like crap; I’d have indigestion, heartburn, acid reflux, everything. I was popping Rolaids, Pepto, trying everything.”

Empric experienced these issues almost a decade earlier, and was prescribed Prilosec. The medication helped manage his heartburn but not without severe side-effects: loss of magnesium, bone-density, and even an increased risk of heart failure.

Eventually, Empric heard through an acupuncturist he’d been seeing for his digestive issues about the benefits of probiotics. He began taking a probiotic pill, and later on, began drinking kombucha.

“My G.I. doctor said that’s life; you’re going to be on Prilosec forever. I wanted to get off it,” Empric said. “Probiotics and kombucha got me off it.”

Salansky admits on first try he was not a fan of kombucha, but that the fermented tea grew on him, both for its taste and its health benefits. “Personally I didn’t like my first bottle or two. But by my third bottle I was drinking it every day,” Salansky said. “I noticed that I was more focused, had more energy, more clarity. And I didn’t have any stomach issues.”

Sensing an untapped market—there were no other kombucha breweries in the state at the time—they decided last May to go into business. But first they had to perfect the product.

So for the next six months they toyed with the recipes and flavors.

“It definitely got better and better. We worked out the kinks, figured out when to flavor it, different blends of tea,” Empric said.

To make kombucha, one must brew a batch of tea then add a sweetener and a symbiotic colony of bacteria and yeast, or SCOBY for short. It’s a rubbery, yellowish-white disc that can regenerate itself through the fermentation process.

The tea is then covered with a cheesecloth and left to sit for a period that may range from 10 days to three weeks, depending on the conditions.

The tea is usually then fermented a second time with fruits and/or spices, which gives each batch its own unique flavoring.

After six months, the trio was ready to bring their bubbly, fermented sweet tea to the masses. But there was one more hurdle to clear. Being the first kombucha brewery in New York—despite the beverage’s popularity on the West Coast, where it can often be found on tap at cafés and restaurants—the state had no regulatory process in place for their business.

“New York State was very new to the product and wasn’t sure how to regulate it,” Empric said. “So we went out and met with them and worked cooperatively with them to set up a landscape for kombucha brewers to grow in New York State.”

By that November, they opened Bootleg Bucha in a 700-square-foot space in the basement of Market at Horsefeathers, at 346 Connecticut Street. The other vendors in the building—including Nature’s Apothecary and a weekly indoor winter farmer’s market—may have helped draw in new customers and raise their profile. But the space itself did them no favors.

“The old space was a room that we made do with for nine months,” Salansky said.

Despite less-than-favorable conditions, the young kombucha brewers made off very well. Empric said they have been selling out since they opened, and at one recent event, the WNY VegFest in August, they sold more than 500 cups in five hours.

“We have a great following and a lot of people come back to refill their bottles,” Ms. Empric said. “We’ve gotten to know a lot of our regular customers.” The strong support has allowed the business to grow tremendously in recent months. In late August, they relocated to a much larger and more ideal space at 1250 Niagara Street—a large red-brick building that they share with Resurgence Brewing Company.

The new, 3,000-square-foot space was custom designed by Salansky and the Emprics, with a walk-in cooler, fermentation rooms, insulation, temperature control and HVAC and ventilation systems perfectly suited to their operation. They say the new space will allow them to brew a more consistent product and grow the company faster.

But the business has already seen tremendous growth in hardly more than 10 months. In addition to purchasing a larger space and stronger brewing operation, Bootleg Bucha has also begun to distribute their products to local grocers and restaurants, including the Lexington Cooperative, Newbury Street Café, various yoga studios and craft breweries, and 14 Tops Friendly Markets locations.

Salansky and and Heather Empric attribute their rapid growth, in part, to heightened public awareness of health and nutrition, both locally and across the country.

“I think we’ve gone from a fast-food culture in the 80s and 90s to people realizing how horrible that is for your body,” Heather Empric said. “You’ve got younger generation of people that want to eat healthier, live healthier and take care of their bodies a little bit more. Probiotics and holistic medicine is the way to do that.”

Health benefits aside, it’s also simply an enjoyable beverage that’s comparable to soft drinks and fruit juice, but less sugary and with a lighter carbonation.

One longtime customer, Anthony Albano, said he began drinking Bootleg Bucha for the health benefits, but the taste quickly grew on him. It’s sweet and carbonated like pop, he said, but sits better in his stomach and is made from natural, healthy ingredients.

“I initially tried kombucha for the health benefits and the taste makes you keep going back. It has a nice finish with the ingredients used,” Albano said.

Their kombucha runs at $4 for a 12-ounce bottle or 16-ounce cup, $8.50 for 28 ounces, $9.50 for 32 ounces, and $16 for 64 ounces (typically a growler bottle). One can purchase a refillable bottle at their location; however, they say they will refill any sealable container, including the disposable kombucha bottles sold at outside locations.