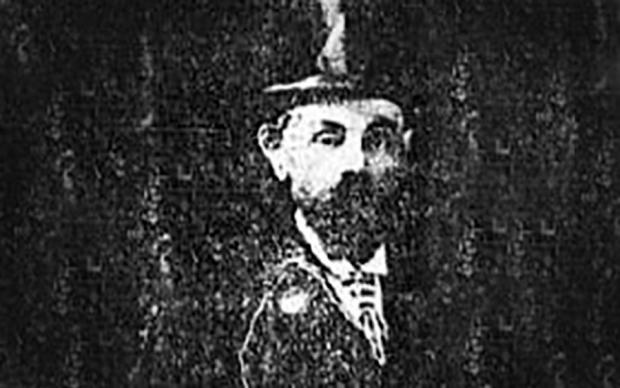 You don’t generally think of Buffalo as a pilgrimage site. Yet every year, scores of believers travel hundreds of miles to pray at the final resting place of a holy man buried in Cheektowaga.

The grave in question is that of Rebbe Eliyahu Yosef Rabinowitz, considered the first Hasidic rabbi to reside in the United States, who led the congregation at the old Pine Street synagogue from 1908 until his death in 1910.

Each year at the Rebbe’s yahrzeit (death anniversary), cars and buses from Brooklyn and Toronto filled with Hasidim and other Orthodox Jews arrive at Ahavas Sholem Cemetery on Pine Ridge Heritage Boulevard just off the Kensington Expressway. There they enter the little brick structure that shelters the Rebbe’s grave, passing beneath a Hebrew inscription hailing him as a “wise genius” and “a mover of mountains,” and offer prayers of remembrance. A Yiddish plaque on the door asks that they “don’t let the memory fade or forget tears” after they leave.

It’s an observance held to honor great Hasidic rabbis, who are almost invariably buried in the New York City area, Israel or in the Jewish cemeteries that remain intact in Eastern Europe. That the grave of such a revered figure could be located in a place like Buffalo is (forgive the pun) a real outlier – so much so that it wasn’t until 1999 that the Rebbe’s gravesite was noticed by Hasidic scholars in New York, and the first pilgrimage was made.

For some Hasidim, figures like the Rebbe are not simply wise men to honor; they are like saints whose spirits can intercede on the behalf of the living.

“Wow!!” wrote one commenter to kevarim.com, a site dedicated to discussing the graves (kevarim) of Hasidic sages. “We heard abt this kever in 2005 & decided to go for my 22 yr old brother that just started shidduchim [getting set up through a matchmaker]! We went to buffalo and the next year on that date was his wedding!! Then when he saw he didn’t have kids in the first year he was married he remembered his vow to return to the tzaddik [righteous one] to thank him if he merits to get married!! He went back – 9 months later his wife had a beautiful baby!!”

“I was there 5 years ago to ask for a boy,” another wrote. “1 year later my son’s bris [circumcision] was on the day of the yahrzeit, and named after him.”

“People get a very powerful sense at his grave – they feel something there,” said Chaim Piotrkovski, a Torontonian who for three years has paid expenses for pilgrims traveling from the GTA to Ahavas Sholem for Rabinowitz’s yahrzeit as part of his own “promise” to the Rebbe.

Piotrkovski says he first visited the Rebbe’s kever a few years ago after doing a Google search for nearby graves of Jewish sages; he’d been traveling to Europe to make such pilgrimages. He said he asked the Rebbe to resolve something – Piotrkovski says he doesn’t feel comfortable revealing the details yet – and “something fantastic happened, something totally unnatural” that solved his problem.

In gratitude he promised to return every year, and to pay gas and tolls for anyone else from the Toronto area who wants to ride in his van or drive their own cars to Cheektowaga for the Rebbe’s yahrzeit, which starts at nightfall and continues through the following day. (This year his yahrzeit begins at dusk, Sunday, November 13, and goes till dusk on Monday, November 14.)

“We cross the border at night, the customs officer asks us where we’re going and we tell him ‘a cemetery’.” Piotrkovski said. “He thinks we’re from Mars.”

That’s nothing compared to the strangeness of the scene at the cemetery for many Cheektowagans, who are extremely unused to seeing Hasidic Jews and may not even be aware of their existence. They see bearded men in wide-brimmed hats and long black suits, and women in long dresses, coming in and out of a tiny brick house amid the tombstones, its interior lit by flickering candlelight that reveals faint shadows of those praying inside. They leave small bits of folded paper with their written prayers, which have accumulated into a small pile atop the Rebbe’s final resting place.

It may look alien to the locals, but for the pilgrims the visit is an act of devotion to a revered man.

Rabinowitz was born in Sokolivka, a Jewish village in present-day Ukraine; he was part of a dynastic line of Hasidic rabbis that stretched back to the mid-1700s. He emigrated to America and New York’s Lower East Side in the late 1890s, one of thousands who fled the bloody anti-Jewish pogroms of the era.

Rabinowitz was 54 years old when he came to Buffalo in 1908 at the invitation of the Pine Street shul. (That temple’s cantor was Samuel Arluck, whose son Hyman became famous as Harold Arlen, songwriter of “Somewhere Over the Rainbow” and many American standards.) According to his death notice in The American Hebrew, the Rebbe passed away at his home on Walnut Street on November 15, 1910, and was widely mourned.

He is buried in a plot across a footpath from the Ahavas Sholem Cemetery, which belonged to the Jefferson Street shul; that proximity has led many to believe Rabinowitz presided over that temple. However, his plot is not actually in that section of the cemetery. Chana R. Kotzin of the Bureau of Jewish Education and other researchers into Buffalo’s Jewish history cite the location of his plot, his death notice and other evidence to suggest it is more likely that the Rebbe was associated with the Pine Street synagogue.

Either way, his gravesite has become a sacred place of pilgrimage. Piotrkovski said he wants to pay to install a water line for the cemetery so that visitors can wash their hands when they leave, per Jewish custom.

“The Rebbe was a great man, and he went to Buffalo for the sake of the Jews there,” he said. “A lot of good things keep happening because of him. When I first visited his kever I said to him, ‘You can’t forget about us,’ and he hasn’t.”