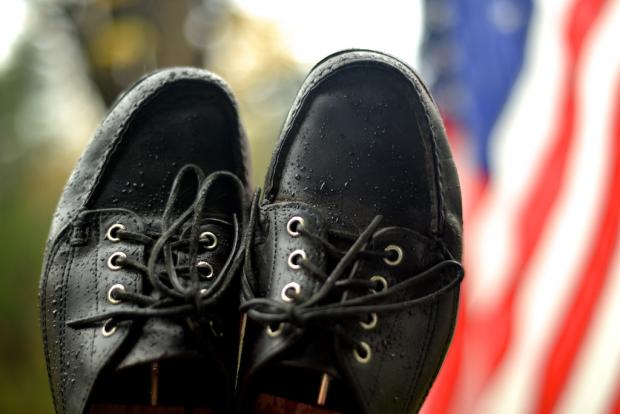 The thought that we might own a pair of shoes for the rest of our lives pressures us to pick the right pair, a timeless, versatile, robust pair, a pair we’ll love for decades until we’ve reached a ripe old age. Indisputably, shoes that can last a lifetime must have replaceable outsoles, durable uppers that perennially buff back to new, and they must, of course, look and feel fantastic. A half-dozen pairs of shoes like that could get a man through life in style and comfort, reduce his contribution to landfills, and ultimately save him money.

Since the cobbler’s trade gave way to mass production, footwear that’ll last a lifetime had been mostly limited to formal men’s shoes. Businessmen, lawyers, and other well paid folks could afford the hand-craftsmanship, and their work culture often required them to show up “well-heeled.” Today, however, as wingtips and oxfords give way to moccasins, chukkas, and classic work boots in today’s increasingly informal workspaces—places where jeans and tees can signal rank and power—the selection of casual hand-crafted shoes with replaceable soles is slowly growing. That’s good news for all of us who want shoes to last a lifetime.

Things began to change in the ‘oughts as hand-made goods emerged as a fascination and selling-point in gentrifying urban areas, especially Brooklyn. Having witnessed that revival first-hand, I can attest to its absurd pricing ($18 pickles come to mind) and its unwitting elitism (few flinched at the $18 pickles). Left-leaning Ivy Leaguers led the revival, funded, I assume, by the same bank accounts that paid their sky-high tuitions and brownstone rents. It was a classic case of “best consumer practices” that only the affluent could afford, let alone saddle with post-Marxist critiques of Late Capitalism. The Yale Law School drop-out knitting sweaters was irksome enough to inspire a whole new genre of parody (see Portlandia and the CBC’s Maker series).

But good things came out of the revival of hand-made goods, as a number of excellent businesses have outlived that gawky adolescence to lead the new American Made movement with a focus on sustainability and quality.

One of those success stories is Oak Street Bootmakers of Chicago, a small firm founded in 2010 making casual and always handsome shoes and boots by hand from all American stuff. Conveniently, one of our country’s best tanneries is still humming along right in Chicago, the Hornween Leather Company, from which Oak Street sources the supple-but-rugged Chromexcel footwear leather. Hornween started in 1905, and Oak Street founder George Vlagos is the son of a Chicago-based master cobbler, giving the whole enterprise a bonafide regional legacy. No hemming-and-hawing: Oak Street shoes are 100 percent handmade in America.

I’d seen my all black Oak Street Bootmaker Trail Oxfords (but think Bluchers) in a neighborhood store in Brooklyn. Had I known of the everlasting durability and repairability of these shoes, I’d certainly have stressed less about the price. I figured NYC and I were going to destroy them in about a year, which was typical for me. But they looked as if some teenage Joy Division fan circa 1983 had defiantly blacked out his LL Bean Blucher Mocs—something I totally would have done in high school. I had to have them.

I’d actually already owned and discarded $79 LL Bean Bluchers, which are pretty shitty shoes by comparison. They’re made in El Salvador (where labor laws are only selectively enforced) from who-knows-where leather; they’re squeaky; the synthetic insoles amplify odors; they became derelict after a year; just not worth repairing. The Oak Street Trail Oxfords were the opposite: everything hand made in the USA from USA stuff; supple, good-looking Chromixel leather; soles hand sewn and readily replaced; uppers always ready for a quick buff back to pitch black.

For the past seven years, I’ve put my black Oak Street Trail Oxfords through hell. I walked thousands of miles in NYC in them, through slop outside Chinatown fish markets, through black, salty slush puddles, over tarmac so hot that dogs have to wear booties. I’ve hiked Iceland’s lava fields in them, mowed the lawn in them, stacked wood, run a chainsaw, kicked tires, changed oil, and climbed apple trees in them. After seven hard years, the soles are finally starting to ask for a replacement, but aside from one surface cut in the leather from my having grazed an errant piece of sheet metal in a junk yard, these shoes shine up and go to dinner on a regular basis. I even wore them to my brother’s wedding.

Hornween leather is so supple, yet so durable—not a combination I was used to. It shapes to the foot almost immediately, and it reagins its stature on the shoetree better than any leather I’ve ever owned. Hornween can have a slight sheen, and it drinks up Venetian Cream by the spoonful, but it also “pulls up,” meaning it gains a lovely natural patina. Wanting to keep them dinner-ready, I’ve blackened these shoes a few times, but the subtle browns that emerge are rich and lovely, too. Maintenance is easy, even fun: a little Venetian cream, the occasional polish, and constant storage on Oak Street’s perfectly shaped cedar shoetrees.

I’ve since purchased a brown pair of Oak Street Trail Oxfords with white soles and a pair of navy blue Beefroll Penny Loafers. The Brown Oxfords see a lot of Saturday action, but I’m thinking of having Oak Street replace the white soles with flat leather and a stacked heel for something unique (they’re happy to do it). The navy loafers are a summer staple, like slippers in bare feet, perfect with cuffed chinos, and so comfortable I struggle not to mow the lawn in them.

I’m going to own these three pairs of shoes from Oak Street Bootmakers for the rest of my life, and there’s a special feeling I have about that. I’ll call it kinship. I feel kinship to these specific pairs of shoes, but I also feel kinship with the American craftspeople and the manufacturing traditions that have persisted at Oak Street Bootmakers and Hornween Leather Company, all in spite of a profit-mad, global economy that’s spewing disposable goods into landfill at an apocalyptic rate. At the risk of hyperbole, when I slip these shoes on, I feel kinship with Mother Earth, like I’m doing something right—not to mention that, over the years, these shoes are a genuine bargain compared to disposable footwear. How’s that for a quasi-Marxist critique of Late Capitalism?

You can try Oak Street Shoes at O’Connell’s Clothing at 3240 Main Street in Buffalo.