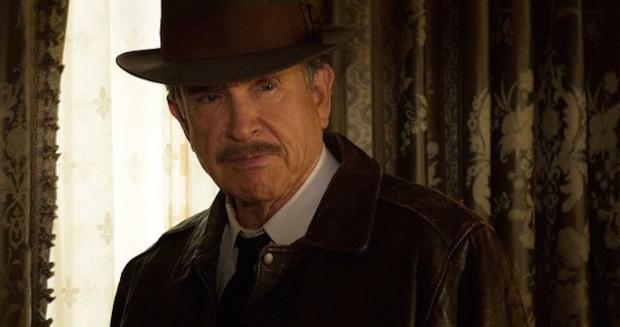 When Warren Beatty made Reds (1981), his much-admired biography of leftist journalist John Reed, he didn’t rewrite early 20th-century history. The Bolsheviks still triumphed in the Russian Revolution, American anarchist Emma Goldman was still deported, and Reed died young like the historical figure. In Beatty’s latest, Rules Don’t Apply, his very personal take on the life and times of the notoriously nutso but uncommonly gifted and accomplished Howard Hughes, an aviation industry pioneer and Hollywood studio mogul who was also a very active and unfaithful lover of movie stars and little known starlets, he’s imposed himself on the factual records, with a vengeance. (It may be this last aspect of Hughes’s life that attracted Beatty, formerly quite a well-chronicled Lothario himself.)

Beatty seems to have intended an affectionate, nostalgic, frequently farcical spoof. He certainly wasn’t much interested in historical fidelity. He’s moved actual events’ chronology around at will and transformed them for his own purposes. Henry Ford, another saner, if equally ruthless American magnate, declared, “History is bunk.” The late-career Beatty—he’s 79—seems to have decided, “Hey, why ruin the fun with dreary details, or even truthiness?” This might have been justifiable if the movie was a lot of fun, but its amusements are too modest and more infrequent as it makes its halting way to the end.

This is Beatty’s first writing-directing project in 18 years and his first acting in 16. As he’s conceived and played Hughes, he’s a parody of the real man, and a rather odd, perhaps self-serving creation.

Rules initially centers on Marla Mabrey (Lily Collins, trying hard in a somewhat unplayable role), a very young and virginal Virginian recruited for Hughes’s bevy of starlets-in-training for a big RKO musical extravaganza. (In fact, in 1958, the year in which this is set, Hughes didn’t own RKO anymore.) Accompanied by her religious and skeptically protective mother (Annette Bening), she hasn’t even caught sight of Hughes after months of lessons and tests. She’s further shielded from the dangerous outside world by her young driver Frank (Alden Ehrenreich), an aspiring real estate developer, who also has never met his employer.

Eventually, they both do, and a brief, unstable triangle ensues, with miserable consequences for the two youngsters, if not for Hughes, who Beatty presents as very eccentrically ignorant of others’ feelings and plights.

It’s these scenes that contain most of the movie’s humor, produced by Beatty’s cockeyed, sharply off-center portrayal of Hughes. At the same time, the star has tried to make the man a wounded, vulnerable guy. This is only of limited effectiveness, and it wears out in the movie’s second half.

But the setup also creates the most offputting and silly result of Beatty’s movie: Hughes’s shabby liaison with the drunken but mostly innocent Marla. The star is at least a quarter-century older than Hughes was in 1958, and this scene is distinctly problematic, plausibly, ethically, and repulsively. (In the movie, and his publicity efforts, Beatty seems oblivious to any possible disapproval.)

A personally originated movie is almost inevitably a vanity project to some extent, but Rules is preeminently one, from the darkened, age-obscuring lighting—cited as artistic by a few reviewers—to Beatty’s biographical indifference. He’s rummaged in Hughes’s history, grabbing and transforming events and facts to produce a flamboyant star turn for himself. But his movie is muddled and confusing. Its pacing is increasingly choppy; snippets of famous-actor cameos come and go, mostly incomprehensibly. (Alec Baldwin, as Robert Maheu, Hughes’s aide de camp, is the chief victim of this incompetence.)

Beatty’s work in Rules has a very small but curious congruence with the actual Hughes’s perverted descent into pathological egoism and delusion. Beatty is, of course, no Hughes (nor a Donald Trump), but this movie is unmistakably more about him than Hughes.