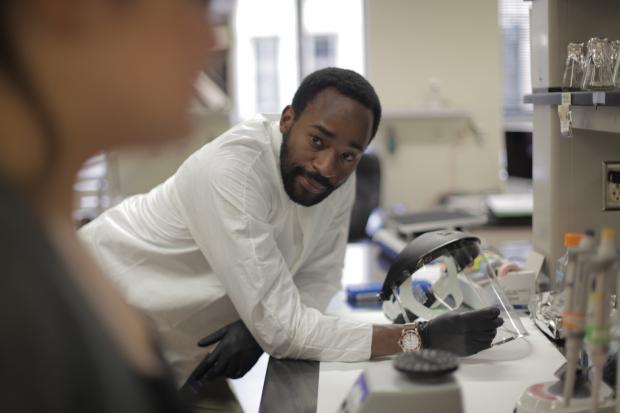 In devising Anya, a contemporary drama about a couple who encounter an unsuspected genetic wall when they try to have a child, filmmakers Jacob Akira Okada and Carylanna Taylor were concerned that the scientific aspects of the story be presented as accurately as possible. They appear to have succeeded, though the result is a movie that may appeal more to scientists than viewers looking for an involving story and engaging characters.

We first meet Manhattan journalist Libby (Ali Ahn) and her husband Marco (Gil Perez-Abraham) consulting with her old friend Seymour (Motell Gyn Foster), an evolutionary geneticist, about her inability to carry a baby to term after three miscarriages. Marco, whose shyness covers an unwillingness to reveal much of his past, believes it is because of a curse on his people, descendents of immigrants from a remote Caribbean island called Narval. Seymour doesn’t take Marco’s belief seriously, but agrees to do a routine DNA analysis of the pair.

To his surprise, he finds that Marco, while apparently no different than any of the millions of other humans inhabiting New York City, genetically a different species, something not previously known among humankind. To prove his theory, Seymour will have to run tests among Marco’s community in Queens, which raises personal and cultural problems that Libby has not been aware of.

When movies approach the topic of tinkering with human genetics, it’s usually in the service of a horror film like Splice. Anya’s speculative inquires are more sociological: how would people react to learn that a genetically different species lived among us? That the Narvals are indistinguishable in every way other than their inability to breed with non-Narvals presumably is meant as an argument in favor of diversity, though it seems a long way to go to that obvious end. And while the filmmakers brought in Harvard geneticists Dr. Ting Wu and Dr. Ruth McCole to inform the screenplay, its discussion of ultra-conserved elements (UCEs) in DNA is more accurate than it is dramatic. Motell Gyn Foster’s lively and intelligent performance does a lot to make this stuff palatable.

Along with laboratory sequences filmed at Carnegie Mellon University, Anya (the name of Libby and Marco’s eventual child, to whom the story is addressed) makes the most of a small budget by perceptive use of New York streetscapes, especially those in Queens, one of the most culturally diverse areas in the world.

Anya will be released on digital platforms and DVD on November 26.