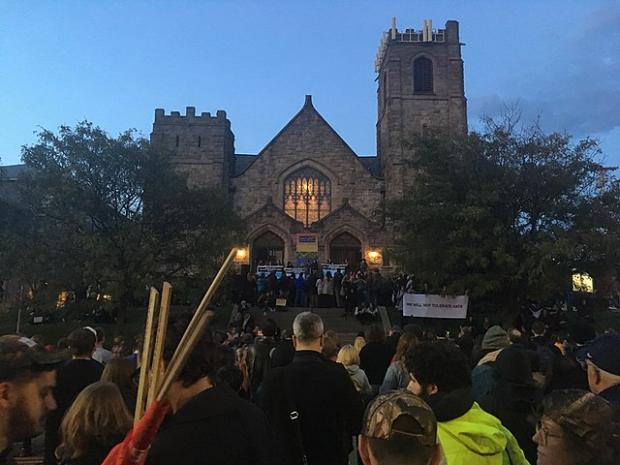 A vigil held in the Squirrel Hill neighborhood this week.
by
Richard Lipsitz
/ Oct. 31, 2018 2pm EST

What many of us have predicted with dread has now come to pass. An anti-Semitic monster killed 11 completely innocent people in a Jewish synagogue in Pittsburgh last weekend. He did so using the rhetoric of Nazis and their apologists. While he was caught and will undoubtedly be punished, no words that counsel healing and patience can bring back the dead. This is an act that will live on forever.

How did such a thing come to pass? What kind of madness creates the conditions for this act?

In Nuremberg, Germany after the defeat of the Nazis, trials were held to bring the leaders of the Third Reich to justice. Among those condemned was Julius Streicher, a notorious Jew-baiter and publisher of a Nazi daily newspaper called Der Stürmer. Streicher became the Gauleiter of Franconia, a state of Nazi Germany. Among his crimes, Streicher was convicted of crimes against humanity for his vile falsehoods against the Jewish people. He was among the original Nazis who used the term “cosmopolitan” and “international capitalist vermin” when describing ordinary Jews. His name is reviled until this day.

We have in our country now people who are mimicking such activity. Fox News talking heads regularly criticize “globalists” like George Soros, Michael Bloomberg, and Janet Yellen, all of whom are Jewish. They have been given life by Donald Trump, and have found a renewed sense of power because of his irresponsible and highly dangerous rhetoric about immigrants and refugees. When the killer in Pittsburgh was carrying out his bloody deed, he referenced an organization called HIAS. HIAS is the Hebrew Immigrant Aid Society. It was established to help survivors of the Holocaust who were seeking to start a new life after World War II. Over the years it evolved into a general immigrant aid society. It is strongly supported by the labor movement, especially the Jewish Labor Committee, an organization of the AFL-CIO.

HIAS has been the subject of attacks from websites like the right wing Breitbart for years. In the days before the massacre, a congressman named Matt Gaetz even when so far as to accuse George Soros of being behind the immigrant caravan currently in Mexico. It is these types of political smears that create an atmosphere that encourages behavior that has now gone from simple nasty talk to open and deadly violence.

The ideological trend that gave this shooter license represented itself in Charlottesville, Virginia last summer, when the chant, “Jews shall not replace us” was filling the air. Donald Trump not only did not denounce this slogan, he stated that there are “good people on both sides” when he was confronted by those ugly events.

Anti-Semitism is a particularly virulent form of racism. Racism, bigotry and their various offspring have no place in our labor movement. We must step up our work in this arena. In this light, the most clear and immediate work we can do is to campaign for a new Congress by supporting our endorsed candidates on Election Day, November 6th.  If we take away a Trumpian majority in either the Senate or the House we will make a concrete step to restore sanity and decency to the direction of our country.