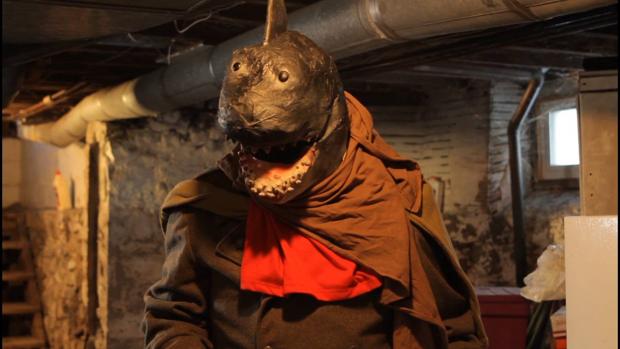 It took a month, but Halloween is finally over. Those of you who live for all things scary may be feeling let down. Is it because your favorite holiday is over, though, or rather because those horror movies you re-watch every October are starting to wear thin?

It’s not easy finding good new genre fare. The quantity is certainly out there: horror accounts for the bulk of independent productions. But how do you separate the wheat from the chaff? You can’t count on the good ones showing up at the multiplex: Hollywood is so averse to anything vaguely edgy or original that their big offering to you this past October was yet another retread of Halloween, already the most imitated movie in film history.

Give thanks to Gregory Lamberson and Chris Scioli, who have spent the past months going through piles of new horror, sci-fi, fantasy and other genre films to select the 100 or so that will unspool during this year’s Buffalo Dreams Fantastic Film Festival, from Friday though Thursday at the Dipson Eastern Hills Mall Cinema. In the years that they have been programming Buffalo Dreams (and before that the more horror-intensive Buffalo Screams festival). Lamberson and Scioli have proven their taste, showcasing dozens of films that otherwise run the risk of disappearing into the undifferentiated morass of cable and streaming. The festival has a high percentage of filmmaker attendance, with most features including a post-screening Q&A.

Tickets are available at the theater box office or online at www.dipsontheatres.com.  For $20 you can spend the whole day; $70 gets you into all seven days. For more information, visit http://www.buffalodreamsfantasticfilmfestival.com/.

Documentary on the life and work of imagineer Arthur Radebaugh, who visualized the future in the “Closer Than You Think” comic strip.

6:45 pm Block 4 I’ll Take Your Dead — NYS Premiere (Canada, 83 mins) Black Fawn Films (Bite) returns with its most accomplished film to date. A man who disposes of dead bodies and his young daughter who communicates with spirits are imperiled when they offer refuge to a woman criminals want buried. Short: Within the Woods (WNY, 13 mins) World Premiere.

5:00 pm Strike, Dear Mistress, and Cure His Heart (USA, Offbeat Comedy/Drama/Thriller, 72 mins) Don’t want to watch the Dreamer Awards? Then check out this unique film from writer-director Mickey Reece, which screens again Thursday afternoon. Newlyweds David and Madeline Middleston have just purchased a historic hotel near the town where Madeline’s estranged mother Dianne resides. When Dianne comes to visit, she brings with her an uninvited guest. This surreal story builds to a shuddering climax.

7 pm Block 19 Will O’ The Wisp  (WNY, Experimental/Thriller, 60 mins) World Premiere of Mick O’Keefe’s bizarro, avant garde tale of a man against the norms of his time fighting to save his daughter. A brilliant
first film that will leave people talking long after the festival ends. Q&A with the artist.
Shorts: One Shot  (USA, Drama, 12 mins),The Coffeemaker (USA, Crime, 13 mins), How Do You Type a Broken Heart (USA, Drama, 13 mins)

6:30 pm Block 24 Tommy Battles the Silver Sea Dragon  (USA, Musical, 2 hrs 10 mins) When a man finds himself on trial in a courtroom haunted by his own demons, he must reckon with the guilt of his mother’s death before it destroys him and the one he loves. A dramatic, full blown musical from first-time writer-director-producer Luke Shirock.

3:15 pm Block 27 Strike, Dear Mistress, and Cure His Heart (USA, Offbeat Comedy/Drama/Thriller, 72 mins) Newlyweds David and Madeline Middleston have just purchased a historic hotel near the town where Madeline’s estranged mother Dianne resides. When Dianne comes to visit, she brings with her an uninvited guest. This surreal story builds to a shuddering climax.

5:00 pm Block 28 Jasper (Switzerland, Dark Fantasy, 86 mins, subtitled) In an undetermined time and place, Jasper, a solitary soul, rescues a young woman left for dead in an alley and takes her home to look after her, unaware that this will change his life…

9:20 pm Block 30 Lieutenant Jangles  (Australia, Action/Comedy, 1 hr 44 mins) An over the top, politically incorrect spoof of 80s buddy action films. In the most crime-ridden city of Australia, only one man keep evens the scales of justice: cowboy detective Lieutenant Jangles. After his partner is killed in a blazing shootout, Jangles goes on an explosive and blood soaked mission to avenge his death.

5:00 pm Block 33 Jimmy (USA, Dark Comedy, 78 mins) Gabe wants to marry Jo Lee, but she’s on the fence because he procrastinates. Jo Lee sends her troubled brother Jimmy a casual invitation to visit her, and Jimmy arrives and overstays his visit. A hilarious character portrait with dark undercurrents written and directed by Jason Balas, who stars.
Short: Be My Guest (German, Comedy, 11 mins)

7:00 pm Block 34 Eullenia (2 hrs 9 mins) A stylish, hypnotic, and beautifully filmed thriller from Paul Spurrier, writer-director of the elegant ghost story The Forest which we screened two years ago. A wealthy, philanthropic UK banker (Alec Newman, star of SyFy’s Dune and Children of Dune) who prowls the streets of Bangkok at night in search of young teenage girls to murder becomes the target of a revenge plot.