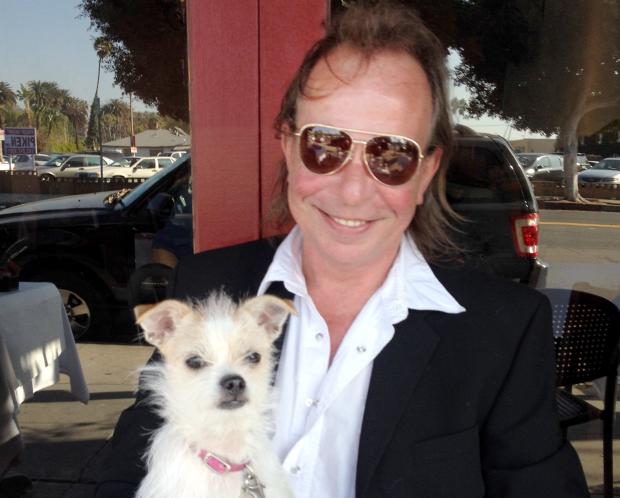 I can’t guess how many times I heard Mike Hudson tell the story of the frog and the scorpion.

A frog and a scorpion are on the bank of a creek, see.

The scorpion asks the frog, “Carry me across the river?”

The frog thinks for a minute, and says, “Okay. Climb on.”

They get halfway across the creek, and the scorpion sinks his stinger into the frog’s back.

The frog feels paralysis set in. Before he goes under, he cries out.

Mike always voiced the scorpion with something of an Irish brogue. When he finished the story, he’d cackle.

That fable was the guiding philosophy of Mike’s life, which ended October 27 at age 61. It was also his excuse for the unexplained attacks and senseless betrayals that riddled his existence with at least as much frequency as the ripping songs he spewed out, and the razored words he published. He could be loving and horrible, funny and cruel, often within the same conversation.

I met Mike when he was hired as City Hall reporter at the Niagara Gazette, where I was a sportswriter in the late 1990s.

Like most of Mike’s previous gigs, that one didn’t last. After his firing, he and Bruce Battaglia, a former city councilman and personable man-about-town, founded the Niagara Falls Reporter in 2000.

They published every two weeks. Every time I saw Mike, usually at the Arterial, a bar next door to the Gazette, he’d say, “Stabs, when are you going to come work with me?”

It didn’t take long. I was soon the beneficiary of the first big round of newsroom layoffs at the Gazette. Later the same day, he named me sports editor of the Reporter, a position that included covering city politics and whatever else he didn’t feel like dealing with, selling ads, and, at least once a week, writing about sports.

I already knew Mike had a previous life as the lead singer of the seminal Cleveland punk band the Pagans. I became very familiar with the band, since Mike would routinely break out cassette tapes or 45s they released when we were sitting around in his dining room, usually drinking cheap beer or plastic-bottle vodka.

I only saw him perform once, in his hometown at the Rock and Roll Hall of Fame. The Pagans were the second act on a three-band bill of Cleveland bands headlined by Pere Ubu.

The show was in the main atrium of the hall. The place was half-empty during the opening act. Shortly before the Pagans went on, it filled up.

I wasn’t sure what to expect. I liked what I had heard in Mike’s dining room. Mick Metoff, the guitar player, was phenomenal. The rhythm section, featuring his brother Brian on drums, thundered. And Mike’s voice, which one critic describing as a “nasal honk,” held it all together.

The recordings I knew were mostly at least two decades old, though. Brian, who Mike said he fought with verbally and physically, died in a Los Angeles car accident in 1991. Mike thought it was suicide.

Mike was in his mid-40s by then, and not in peak physical condition. A touch paunchy, his hair thinning, wearing his ever-present black suit coat, he looked more like a sleazy promoter, or possibly a rummy at the bar, than a star performer.

Until he got on stage. Up there, he sneered, pranced, and raged his way through a killer set that electrified the joint.

The Pagans wrapped up their short set. By the time Pere Ubu, a band that had enjoyed a much more prominent prime, went on, at least half the crowd had drifted away.

Back in Niagara Falls, the Reporter built a more mainstream audience. We did some work there that I remain proud of, exposing corruption at City Hall and in the hierarchy of Laborer’s Local 91, writing stories that drove shady politicians from office and landed deserving people in prison.

Mike was not a great journalist in the sense of exhaustively reporting a story by talking to all possible sources and exploring every angle. But he would find what he believed to be the truth, then beat his subjects about the head and neck with it.

“I write to hurt,” he told me a few dozen times.

Unfortunately, that tendency was not reserved for union thugs and political shysters, or limited to his published works. He savaged people who dared criticize or question him, via both email and on the phone, whether they were readers, friends, strangers, or co-workers. He could expertly insert a scalpel, or flail away with a hammer.

One of my freelance gigs during my time with the Reporter was editing a mental-health magazine. Mike showed plenty of signs of bipolar disorder, and one day at his table we talked about it, and whether he had considered getting some help.

“I’m afraid I wouldn’t be the same writer, that I’d lose my edge,” he said. “Besides, Lincoln had depression, Churchill had depression.”

So he self-medicated. He told me about his daily routine more than once. Up early, often before dawn. Coffee and a few beers while catching up on emails and making phone calls or writing. Around 10:30 or 11, he would switch to vodka and keep going until he passed out, usually by dinnertime or soon after.

It caught up with him, of course. His liver shut down. Bruce made him go to the hospital, saving his life. Getting the last rites of the Catholic Church shortly after admission shocked him dry for a while.

That only made him nastier, somehow, more paranoid and vicious. At least to those of us closest to him. Inevitably, he started drinking again. We barely spoke in the last few months before I left the Reporter, and I had not talked to him since October 2008 when he died.

He moved to Los Angeles in 2011, though he still wrote stories and columns for the Reporter as if he were in Niagara Falls. From what mutual friends told me, he may have found something like peace out there, writing fiction, getting involved in rescuing stray dogs, and reviving his musical career, including a new album from a new version of the Pagans.

When I found out he was gone about two minutes after waking up Saturday morning, I did not feel any regret about our estrangement. I thought about reaching out to him a year ago, after he had a public falling out with the person he somehow managed to sell the Reporter to after I left and Mike forced Bruce out in hideous fashion. Also, Mike’s mom had died. While trying to think of a way to word a message that did not sound in any way like an apology, he and the publisher of the Reporter reconciled. So I ditched the idea.

I spent a lot of time thinking about the people he hurt, many of them for no conceivable reason. And how, by helping fill the newspaper and selling ads, I enabled that destruction. For that, I am truly sorry.

I also thought about whether to write this piece. I take no pleasure in his passing, and came to terms with my relationship with Mike a long time ago. After his near-death experience more than a decade back, he said he didn’t want anyone “writing a bunch of flowery shit” when he did go. So I figured an honest portrayal of the guy I knew was in order.

I think he would have done the same for me. One line I heard a few times during our more brutal battles was, “I’ll write your fucking obituary.” I took it as a boast that he was immortal, that his undeniable talent would carry him through anything the world did to him or he did to himself.

Until Saturday morning, I thought that he might just be right.

I learned of Mike’s death through a text message with a link to his obituary in our old newspaper, which bears little resemblance to the one he and Bruce started, and we built. The description of the cause of death, “sepsis from a recently torn bowel,” possibly due to previously undiagnosed colon cancer, was so excruciatingly detailed, I wondered if he wrote that bit himself.

Either way, my first thought—which also occurred to many others, judging from comments on various Facebook posts and text threads over the weekend—was that Mike died, in the most literal possible sense, from being full of shit.

Now that would have made him cackle.