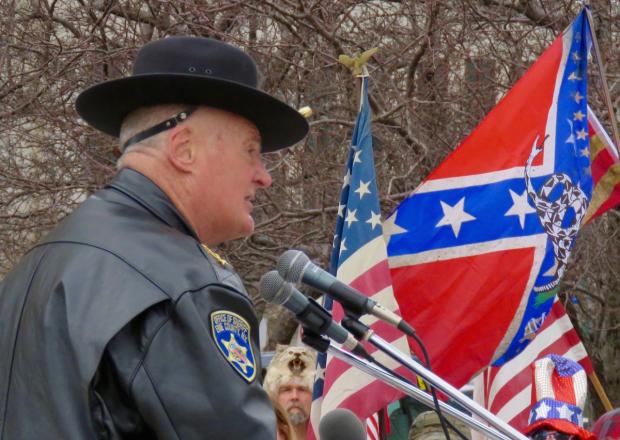 Erie County Sheriff Tim Howard at the "Spirit of America" rally in Niagara Square on April 1. Photo by Jay Burney.
by
Bruce Fisher
/ Nov. 1, 2017 8am EST

Bernard Tolbert, the former FBI regional leader running for sheriff on the Democratic line, is up against a three-term incumbent running on a record that even the Fox News-leaning daily newspaper editorialized against. The incumbent, Tim Howard, has to defend or explain 24 deaths at the jails he has run since 2005, and an association with other sheriffs—Joe Arpaio of Arizona and David Clarke of Wisconsin—on whose watch local jail inmates suffered and died, while Tolbert doesn’t. Howard has to defend or explain his extraordinary assertions of being a “common law” and “constitutional” authority over any judge or legislator, while Tolbert, who makes no such extraordinary claims of super-judicial authority, doesn’t. They both have to explain sexual harassment cases, but Howard is involved in an active open case directly involving him, while Tolbert is not. The usual patterns of local politics favor long-time incumbents against underfunded challengers, but Tolbert is allegedly within striking distance of defeating Howard notwithstanding the latter’s brutal campaign messaging about Tolbert’s alleged involvement in a National Basketball League pay-discrimination lawsuit that was settled and sealed six years ago.

Democrats outnumber Republicans 286,463 to 152,634 in Erie County, but give the Republican incumbent all 13,165 Conservatives plus the 28,257 enrolled as members of the Independence Party—and still, Democrats have over 92,000 more registered voters here.

And then there’s the news environment. Even before the arrest of President Donald Trump’s onetime campaign manager and the guilty plea of a campaign advisor whom Trump bragged on by name, Democrats were outpolling Republicans by anywhere from eight to 15 points in national polls. The Republican president’s numbers were a net negative of anywhere from 10 points (Rasmussen) to 29 points (Gallup), and the right track/wrong track numbers are heavily skewed toward wrong (30 points on Rasmussen).

And yet the Democrats in Erie County may lose.

How could this be?

Nope, all politics are national

If Republican candidates for Sheriff, Comptroller, Clerk, and Erie County Legislature win in 2017, expect the following:

If Erie County Democrats lose in 2017, the 2017 candidates will be blamed—Tolbert for his bad judgment for having run against Byron Brown, Vanessa Glushefski and Steve Cichon for having become candidates at all, and the Democratic Party organization for having failed to recruit strong candidates and for having failed to help articulate any counter-narrative to the Republican ascendancy—despite Republicans’ vulnerability, given their enormous registration disadvantage, bad poll numbers, and a looming national political crisis over prosecutions of people once close to the president.

The academic political scientists have for some time concurred that candidacies succeed or fail more on tribal affinities, which is to say, emotions of group solidarity and either grievance at or exhultation about defeating The Other.

So why can’t Democrats, in their great majority, in this Blue county, stimulate some sense of belonging at this time of great polarization?

Blame the divorce from economic issues. Democrats without Labor have done poor electoral success, and it’s harder to mobilize or stir working-class group sensibilities still salient among Labor members during this off-year election for more or less ministerial posts. A county comptroller won’t much influence job-creation; neither a county clerk nor a county jailor is going to address the growing income polarization, the problem of low-wage work, the not-yet-realized promise of the Buffalo renaissance for any but real-estate speculators, the wired, and the transactional politicians of whom we all tire.

And yet, the incumbent sheriff is long in the tooth and has too much explaining to do. The incumbent comptroller has been adjudicated with ethics problems. The Republican candidate for clerk is closely tied to Carl Paladino, who made himself so politically toxic that even the president so reviled by Democrats has yet to appoint him or otherwise demonstrate the loyalty he so notoriously demands.

But there could be a simpler explanation for the somnambulance of Democrats: Perhaps they think that the election happened in September, or will happen next year, because Byron Brown is once again the Democrats’ choice for mayor—and the rest of politics happens not here, but on a screen, with images from far, far away.