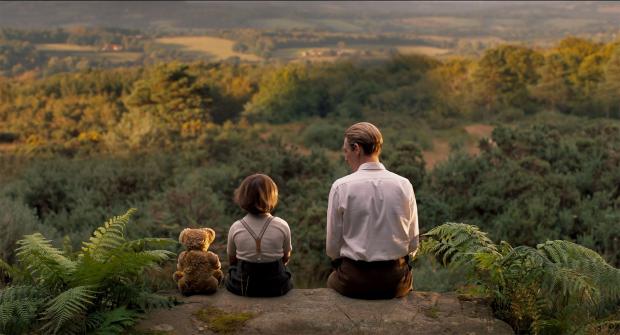 In November of 1927, in an unsigned review, critic, screenwriter, and Algonquin Roundtable quipster Dorothy Parker took acerbic aim at a cultural totem: A. A. Milne. The occasion was the American publication of the Brit Milne’s book of children’s verse, Now We Are Six. To speak against him or his work, wrote the inveterately irreverent Parker, “puts one in the ranks of those who set fire to orphanages, strike crippled newsboys and lure little curlyheads into a corner to explain…that Santa Claus is only Daddy making a fool of himself.” The waggish Parker found the verses oppressively sweet and whimsical, or as she put it, filled with “a sedulous cuteness.” She conceded that she was in “a minority amounting to solitude.”

Indeed, in Simon Curtis’s Goodbye Christopher Robin, Milne’s very young son Billy (Will Tilston) wonders if there is anyplace on earth where his father’s Winnie the Pooh stories aren’t known. The stories of Winnie the bear and his little companion Christopher Robin are, of course, Milne’s most famous and enduring works. In the movie’s portrayal young Billy’s identity becomes entangled with Christopher Robin and the stories the real child helped his father invent, with increasingly unfortunate consequences.

There’s a distinct symmetry of this story and the one behind the other inordinately popular children’s book of the last century, Peter Pan. Author J. M. Barrie improperly assumed guardianship of five orphaned brothers with some sad results. The middle boy and Pan’s namesake Peter much later committed suicide, and the death of one of the younger brothers has long been suspected to be self-destruction. An execrably icky and false movie several years ago, Finding Neverland, fabricated a ridiculously sweet origins story for Barrie’s creation.

Curtis’s movie is nowhere near as dishonestly saccharine as that one and it’s intermittently affecting, but it’s very selective in its fidelity to the record. Milne (Domhnall Gleeson) returns from the First World War, seriously shellshocked and embittered. He determines to abandon London and his successful career as a playwright and humorist. He takes his wife Daphne (Margot Robbie) and their small son off to Sussex countryside where he hopes the country quiet will help him write an anti-war tome.

At first too psychologically fragile and distracted to tend to the child, circumstances eventually leave him alone with Billy. Gradually, at mealtimes and during walks in the woods, he bonds with the boy as he entertains him with games and fantasy spinning of animal characters, especially that inimitable bear Winnie. In doing so, he realizes he has the makings of a book. In one charming scene, based on fact, Milne corrects Billy’s table manners by telling him he shouldn’t grip his knife and fork so they point upward lest someone fall through the ceiling, become impaled on the utensils and leave blood all over the breakfast table. The boy collaborates with his parent on the invention of the Pooh stories, not realizing that he will become popularly identified as Christopher Robin, to his growing dissatisfaction.

But the filmmakers have increasingly played fast and loose with the facts, particularly in their movie’s last 25 minutes (with Alex Lawther as the young-adult Billy). It’s necessary for me to tread carefully here, and write obscurely, to avoid revealing an important plot development, one that underlies the movie’s exaggerations and inaccuracies.

Gleeson gives a graceful, sympathetic performance and his scenes with young Tilston—a wonderfully effective performer—are persuasive and endearing (a little improbably given the tenseness and emotional conflicts of Christopher Robin’s first half hour). Kelley Macdonald is fine as Billy’s intelligent and loving nanny.

It may be objected that a movie should be judged independently of its adherence to a set of facts, but this writer finds it objectionable when a film utilizes the credentials of biography and history, but ignores them, anyway. This is a much more serious and conscientious effort than Finding Neverland, but it ultimately fails to explain the real troubles that Milne’s beloved stories caused his offspring.