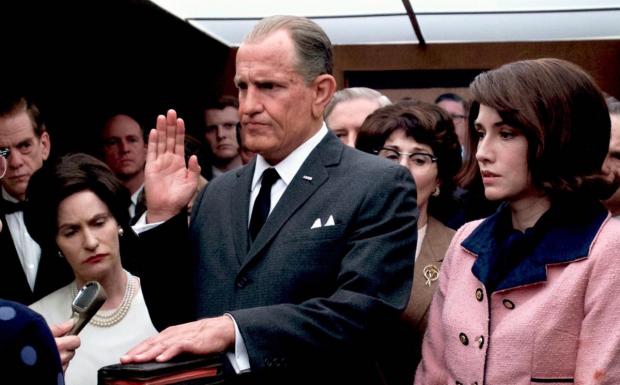 Manichaeism is always a danger in politics, but lately it seems to have reached epic proportions. Look at the recent anti-Trump speeches by Senator Jeff Flake and former president George W. Bush. Reactions on social media have been either to lionize the speakers despite their past records, or to condemn the lionizers for having any good thoughts about such veteran scalawags. They echo what Bush famously said to the nations of the world in 2001 when he was recruiting for his “coalition of the willing”: ”You’re either with us or against us.” The notion that there could (never mind should) be areas of agreement between persons who are otherwise opposed seems to be more than many minds can bear.

Those allergic to ambiguity should, for their own well being, refrain from studying Lyndon Baines Johnson, 36th president of these United States: It might make your heads explode. If you ask me, Johnson is rivaled only by Winston Churchill as the most fascinating political figure of the 20th century.

As the majority leader of the Senate in the 1950s, he is commonly held to be the most successful person ever to hold that position. He had a genius for courting senators of both parties and assembling coalitions to get legislation passed. (Consider that he was a conservative Democrat working with a president who was a liberal Republican, Dwight Eisenhower, leading the country at one of the most forward-charging eras in its history, and you’ll understand why the gridlock that has stalled American for at least 20 years is so heartbreaking to many of us: It wasn’t always this way.)

Ironically, Johnson’s position in history is as ambiguous as his use of power. He passed the most significant social legislation since FDR’s New Deal, taking and amplifying policies that John Kennedy proposed but likely would not have been able to institute himself. Yet he also led the disastrous escalation of our involvement in Viet Nam, a war that stymied his prodigious political gifts.

You cannot have a single opinion about the man, which is precisely what makes him so fascinating.

Like Churchill, Johnson has often been portrayed in movies but has never been the subject of one covering his entire life. That doesn’t change with Rob Reiner’s LBJ, which tries to encapsulate the Texan’s life from the vantage point of a pivotal time in his career, the period after he became president following the assassination of JFK.

The film opens with Johnson (Woody Harrelson) miserable in his position as Kennedy’s vice president. Flashbacks show him challenging Kennedy for the 1960 nomination and accepting the VP slot because he thinks he can build it into something more powerful. His failure, and the open disdain with which he is treated by most of the cabinet, have left him defeated. The presidency has always been his dream, but he gets it under the worst possible circumstances, surrounded by people who expect or hope that he will fail, with less than a year to go before the next election.

If you have to cover Johnson’s career in a feature film, I suppose that’s as good a way as any. But that’s a big if. Historian Robert A. Caro is four volumes into his biography of Johnson, a project that when it is done will have consumed most of the writer’s professional life, and it’s fascinating stuff: This is just not a career that should be condensed. (It would make a fabulous long-form television project.)

Even on its own limited terms, though, Reiner’s well-intended film has trouble getting a grasp on its subject. It doesn’t help that by focusing on the lowest point of Johnson’s public life, it too often makes him appear whipped, defeated, pathetic (all exacerbated by Mark Shaiman’s mopey score).

Though Harrelson is, like Johnson, a native Texan, he’s not ideal for the role. The elaborate make-up he’s buried under often makes him look more like Rondo Hatton than LBJ. There’s so much else—distinctive speech, mannerisms, walk—that could be used to evoke the man, as Bryan Cranston did when he played Johnson on Broadway and the HBO movie All the Way. I’m guessing that, aside from the accent, Reiner cast Harrelson in order to capture the likeable side of the character: If only he had trusted his actor simply to act the part.

But don’t let me talk you out of seeing it. If it’s not what it could have been, it will still work for many viewers as an introduction to an endlessly fascinating figure. And it’s depiction of how difficult politics are in good times is worth understanding if we ever hope to get out of the morass we’re in now.

Post script 1: LBJ is exactly the kind of movie that capital-H Hollywood would not so long ago have trotted out for awards season. Yet it’s been awaiting release for over a year—I first saw it at TIFF in 2016. And it seems that none of the major studios were willing to distribute it: it is being released by Electric Entertainment, a new distribution arm of the production company owned by disaster specialist Dean Devlin (the current Geostorm). I know no more proof is needed that Hollywood has lost interest in making movies for adults, but the proof just keeps piling up.

Post script 2: I’m sure it was a lawyer who started the practice of putting notes at the ends of films disclaiming any resemblance to real persons and events. Until recently for movies clearly based on real people and situations the practice was to note that while the preceding was “inspired” or “adapted” by reality, certain liberties were taken etc. etc. etc. But it’s the height of ridiculousness to read this at the end of the end credits for LBJ:

“The persons and events in this motion picture are fictitious. Any similarity to actual persons or events is unintentional.”

What makes this even more inane is that the production makes a point of identifying real people in the film, even when they have no dialogue or other direct acknowledgement. The end credits mention Pierre Salinger, Arthur Schlesinger, Robert McNamara, Everett Dirksen, McGeorge Bundy, Hubert H. Humphrey, and many others who were on the scene but do not directly figure in the film. Sit all the way through the end credits and you’ll see an exercise in veracity vehemently denying what it is doing.