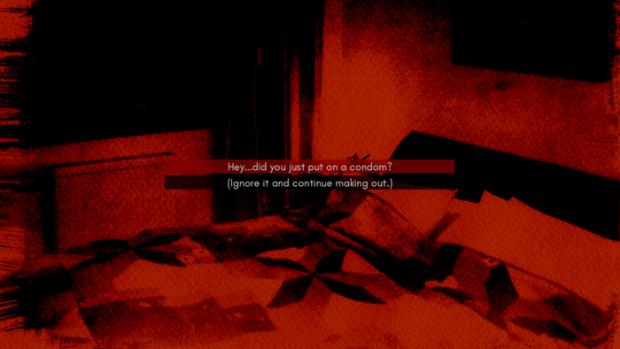 The Game: The Game

Welcome to the sleaze world. Feminist artist Angela Washko’s installation called The Game: The Game, at Squeaky Wheel. Computer game, that is, about the actuality game of pick-up—in a bar setting usually, but anywhere, anytime is good—for a transient sexual encounter. One night stand usually, but open to further possibilities. As long as nothing complicated. Nothing personal.

Other aspects of the installation include instructional materials from professional pick-up artists (PUAs for short). Seduction coaches.

This is for real. What these guys do. They write books and teach seminars on how to pick up girls/women, and take them home. Effectively and efficiently. Or maybe go to their place.

A typical game scenario. You’re a woman, in a bar crowded with men. Looking around for your friends, who were supposed to meet you there. For whatever reason, you attempt to make your way across the room, and this guy—complete stranger—grabs your arm. Not in a hostile way, but an aggressive way. Like maybe he knows you, but at least clearly wants to, and says something scripted lame. Do you simply go along? Or go along just so as to not embarrass him—because you’re a nice person, you don’t like to embarrass people, call them out for unwelcome aggressive behavior? Or pull away and get away? Undoubtedly, the best choice. But which might result in some gratuitous nastiness from the predator guy. But worse outcomes could ensue per further scenario questions and response alternatives.

Part of the instructional materials is the script. A series of icebreaker questions. Where are you from? What do you do? Whatever your answer—writer, teacher, CEO of a Fortune 500 company, waitress, auto mechanic—the guy’s response: “Awesome.” But essential for him to seed in “logistics” questions as well, according to seminar instructor Julien, in a video of an actual teaching session. “Where do you live?” “Do you have roommates?” “Are they with you?” “Are you alone?” “How are you getting home?” That last item underscored.

Being “sexworthy” isn’t enough, Julien emphasizes. You also need to know where and how to steer the negotiation. Guys in the seminar audience—the students—quietly take notes, in notebooks or on laptops.

Another video presents an interview by Washko with a PUA billed as “the Web’s Most Infamous Misogynist.” (I had thought that was Donald Trump. These guys are more sophisticated than Trump, but about the same degree creepy.) Who goes by the name Roosh V. And expounds on such pertinent issues or considerations as why male orgasm is essential, female not so important.

Also included in the installation, a shelf of books by various PUAs. Ranging from Rules of the Game by Neil Strauss, to Secrets of Speed Seduction by Ross Jeffries, to two volumes by Roosh V, who does not mince words, particularly in his titles. One of his books is entitled Bang. The other, 30 Bangs. The latter a book of short stories. (Though a warning. Based on a quick perusal of several of them, hardly of the literary quality—with respect to plot, depth of characterization, or elegance of prose—of, say, James Joyce’s Dubliners, or Sherwood Anderson’s Winesburg, Ohio, or Eudora Welty’s Collected Stories).

Whereas Bang appears to be an all times, all situations instruction manual on seduction, broken into subsections of “Early Game,” “Middle Game,” “Late Game,” and “End Game.” Plus a handy Appendix covering problematical situations that might arise. Such as—it might turn out—she’s a feminist. Or her breath smells. Or somewhere along the way, you forget her name. (In the forgetting the name case, Roosh counsels against the Seinfeld solution of waiting till she goes to the ladies’ room, then rummaging through her purse for some identification item, as “unnecessarily risky.”)

Any redeeming artistic or social value to any of this stuff?

Some of both. In essays in a handout brochure accompanying the exhibit, Squeaky Wheel Media Arts Curator Ekrem Serdar relates the current exhibit to Washko’s long-term concern with “bridging communities—in this case feminists and the manosphere—to understand each other outside of their echo chambers.” While brochure contributor Dorothy R. Santos notes how participants in the seminars, in addition to the predatory strategies and techniques they signed up for, “are learning to be social, less awkward, and charming.”