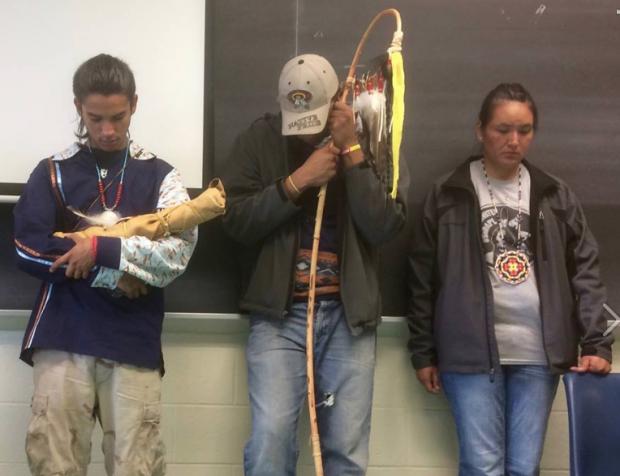 North Dakota Water Protectors are standing against an empire of destruction that is operating in our names.

There are horrific things going on today in North Dakota. Its not just the extraction of oil and wealth from the earth, energy sources that should be kept in the ground.  It’s not just the economic and cultural brain damage practiced by the damned corporatist elites that wreak havoc on our nation, our planet, and on our people. Its not just the political insanity that has infected america as we witness the vile and divisive electoral campaigns that sicken our society. It is not just that we value money and power over life. It is not just that we do not care about water, air, and the gift that is the earth. It is the vanishing of humanity. We have lost our ability to think, to be compassionate, to make decisions that benefit ourselves. We are lost in a transition that exhaults power over common sense, that holds nothing and no one accountable for egregious infractions, that is a murderous rampage on all life including our own. We are the voice of genocide. It defines us.

There is this thing going on in North Dakota. At the Standing Rock Reservation which has witnessed generations of repression, where the people live on wisps of hope and waves of despair. Where the elders and children pray and sing and summon courage to survive and resist. Here at the Camp of the Sacred Stones, and at the newly formed 1851 Treaty Camp, the people are gathering, standing against this genocide, and falling to a brutal military repression that mimics the depravations of Custer, and shows that the legacy of our Civil Rights victories of the 1960’s have born little fruit.

Thousands of people, from indigenous nations across North America and the world have gathered to stand against the water killers.  This is being described as the largest gathering of native people in over a century. People of all nations, cultures, and societies are standing with them. The United Nations is trying to intervene. These people are the water protectors and they are working to defend your and my life. They know that water is life. They are fighting to protect earths sacred water from destruction. They are willing to sacrifice their own lives.

You may not know much about this. Media coverage has been sparce. Most media outlets are caught up in the hysteria of Donald v. Hillary. It all has our heads swimming in the noxious gasses of our decomposing nation.  When media has tried to cover it, arrests of journalists occur.  Freedom of the Press apparently is not the Constitutional protection that we think it is.

The corporate elite have decided to end it all here. They have brought military might, armored vehicles, dogs, helicopters, supersonic sound machines.  No need to build a wall around these camps.  Bullets will suffice.

(1) bisons from videobuzz on Vimeo.

For more pictures and videos, click the links below or use google

“A Shameful Moment for this Country — Report Back on Militarized Police Raid on DAPL Resistance Camp”- (October 28, 2016) Democracy Now

Who is Banking the Dakota Access Pipeline (Little Sis)

The Whole World is Watching

Why Standing Rock is Bigger than One Pipeline Bill Moyers & Company