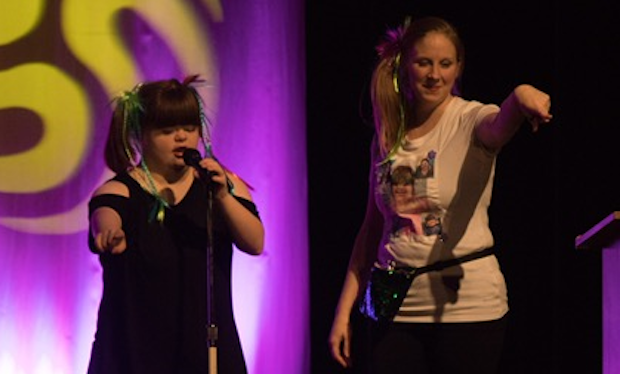 “Dream…the future belongs to those who believe in their dreams…” A quote that is displayed prominently in one dance studio in Western New York, and inspires the 160 dancers who make their way through the studio doors every week.

That quote is particularly special because it is the backstory of Danceability, a dance studio in WNY which caters to students of all special needs, and ranges from ages three through adult.

In 2007, Robin Bishop and Christine Dwyer, both with dance and human service backgrounds, acted on the dream of owning their own dance studio, to inspire and include dancers of all abilities to join, build friendships, and have a space to learn dance.

A small studio was formed, with an even smaller waiting room, and a partition separating offices. Before they were set to start registering dancers for class, the duo forgot to pay their electricity, and signed up dancers with a lantern, which they still keep to this day. Even with that snafu, the duo started with 60 dancers, 40 volunteers, and Robin and Christine as volunteer teachers.

Danceability offers a full season dance program that offers dance and movement classes. Rather than just tap or just ballet, each class is exposed to several genres of dance and depending on what their strengths or favorites are, that is how the performance piece is selected; and it’s often a different genre each year. Fitness classes are also offered throughout the year.

Danceability serves all special needs, and the organization does not define what the special need is. If someone wants to dance there, they will gladly accept that dancer. The instructors provide high quality teaching, and besides being trained in dance, the instructors are special education teachers, social workers, physical therapists, and dance therapists. The new studio is also designed create a comfortable and accessible environment with a variety of sensory props and teaching aides. A special element to Danceability is the one-on-one attention provided by volunteers in the classroom experience. Each dancer is paired with a volunteer, and that same volunteer joins them every week for class, from September through May, and the volunteer even performs with the dancer during the annual recital.

Mary Wilde joined Danceability when she was just five years old, and as a current 17-year-old, her mother Cathy Wilde realizes the profound impact that Danceability has had on Mary.

“Just seeing her grow in the dance classroom has been really impressive,” said Cathy. “She is the one who counted off and started the dance-off in their last dance.”

Mary has taken a leadership role in the class and is always filled with joy to be in the studio every week with her friends. Mary has been dancing with the same five girls for her entire tenure at Danceability, and loves seeing her friends and learning tap, ballet, and hip hop.

“Mary loves Danceability more than anything in the entire world,” said Cathy. “There’s nothing she loves more than Danceability.”

Cathy was so inspired by Danceability’s mission and first recital, that her entire family became a part of the mission. Aside from Mary dancing in the recitals over the years, Cathy’s husband has been the stage manager for the recital starting in the second year. Cathy’s sons were stagehands, and Cathy and her family members also volunteer in class.

Cathy was also inspired since the very first recital. Cathy remembers a moment in the first recital when Robin and Christine were doing a teacher dance to the song “I Believe” and the entire audience started crying. Cathy was proud of the power in their performance, and realized that the duo made their dream of owning a special needs dance studio come to fruition.

Another powerful moment stuck with Cathy. During one of the recitals, one of the younger girls was set to perform in the recital, but did not want to dance. There were two girls in the class, and one of the girls remained on stage and performed the dance, while the other girl ran off the stage.

The stage manager and sound person knew that was only temporary. They knew they would be running that dance again, and both girls would dance it together. They knew they would make it work. The emcee called the little girl’s sister backstage to lift her spirits, and then the dancer came back to the stage, and performed the dance with her class.

“When she finished, everyone burst into applause,” said Cathy. “She threw up her arms with a huge smile on her face. Everyone went nuts, it was so sweet.”

Now in its 12th year, Robin is still inspired by her original cause.

“We have so much more ground to cover in the area of understanding the special needs community,” said Robin. “Each one of us is unique and that is no different for someone with special needs, but we need to take the time to understand their needs in order to make them successful and not define their success by our own personal standards.”

Between 2007 to present day, the success has nearly tripled. Robin, who holds the executive director title, realized that the organization needed a larger space to include even more desiring dancers. With that, a $300 thousand capital campaign began, and a new 5,000-square-foot space was purchased. Dancers, volunteers, and families, had their first week in their new studio this past week, were welcomed with three dance studios, a sensory waiting room, a community room, a costume room, and three times the amount of space they were used to.

The new goals the organization sets for itself continue to be achieved. The dancer registration is now at 160 dancers, over 100 volunteers, one full time staff member, two part-time staff members, and nine part-time paid dance teachers.

“I’m just so proud of this organization, I’m just so thrilled with their growth,” said Cathy. “To see the level of success that they achieved, I couldn’t be happier; they’re the best people in the world.”

Danceability is holding a grand opening party on Friday, November 16 from 6pm-8pm at their new studio at 2365 George Urban Blvd. in Cheektowaga. Danceability is still seeking classroom volunteers to work with the dancers one-on-one, as well as accepting donations for the capital campaign.