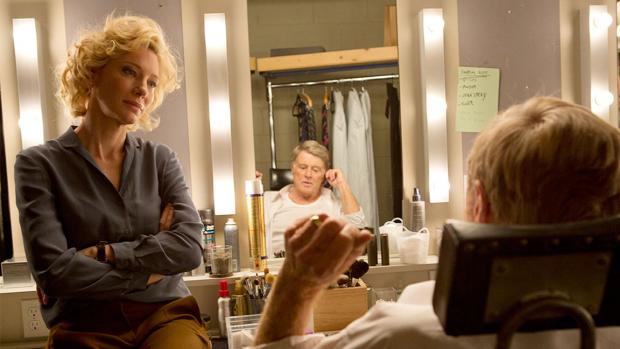 When you’re sitting at the beginning of a movie, and the titles announcing the various productions companies end with “Mythology Entertainment” just before the title of the flick—Truth—you have to wonder if someone out there in Hollywood is pulling your leg.

Based on the memoir by former 60 Minutes producer Mary Mapes, Truth recreates the events that led up to her firing and the forced resignation of CBS news anchor Dan Rather in 2008. After receiving information regarding the military record of President George W. Bush, who at the time was running for a second term in office, Mapes (Cate Blanchett) put together a team to investigate. A story was run questioning how Bush got into the Texas National Guard, widely viewed as an outpost where young men of privilege could avoid Vietnam, and whether he even fulfilled his obligations there. After the story ran, critics began to pick at the reporting, and the network appointed a panel which concluded that the evidence was not conclusive enough to justify the story.

So what was the truth? It seems likely that what Mapes and her team reported was accurate, but just as likely that it fell short of the standard that should be required by a respectable news organization—and as Rather (played with a minimum of makeup and more dignity than you might expect by Robert Redford) notes, in the news business, “60 Minutes is the gold standard.”

But the movie assumes that you don’t doubt that. Awash in manipulative music and emotional confrontations, Truth offers its own most damning criticism when Rather says, “People want to talk about conspiracy theories because that’s what they do these days, and the truth gets lost in the scrum.” Debuting scripter-director James Vanderbilt films his story as a conspiracy theory, but with all of the paranoid attitude and few facts. The closest we get to any explanation as to why someone might have either fed Mapes false information and/or orchestrated her removal is a monologue delivered by stressed-out reporter Topher Grace about CBS owner Viacom’s political ties to the administration, which is delivered as if Vanderbilt is mostly concerned about deniability. The possibility that Mapes pissed off the wrong people when she broke the story about Abu Ghraib seems likely, but there’s no proof. And in Mapes’s climactic confrontation with her accusers, Blanchett’s icy indignation doesn’t answer the fact that most of the questions she is being asked are, well, reasonable.

As the real Rather said at an audience Q&A at TIFF, “Journalism is not an exact science.” That goes double for movies.

You may remember the title Our Brand Is Crisis—it is a memorable phrase—as a documentary from a decade ago about American political operatives running the campaign of a candidate for president in Bolivia. There’s a new film by the same title, which claims to have been “suggested by” the documentary. If you’ve seen them both, you might be hard-pressed to make the connection.

Developed by George Clooney and his partner Grant Heslov, this new Crisis takes a lot of dramatic license (and adds some unnecessary slapstick) in what appears to be an attempt to show viewers that political campaigning is a dirty business, run by slick consultants who don’t care who they work for so long as they get paid. Is this news to anyone? Can I see some hands? No, I didn’t think so.

Starring Sandra Bullock and Billy Bob Thornton as consultants on opposite sides for whom the race is a surrogate to battle each other, Crisis was primed to be a satirical comedy along the lines of Thank You for Smoking or Used Cars. It has its moments, like Bullock tricking the opposing candidate into quoting Goebbels at a rally. But they’re few and far between. So is hard information about the horrors visited on third-world economies by the IMF, which is only alluded to here. When Bullock does an about-face to do the right thing at the film’s conclusion, it packs no punch: We know she’s doing it not because her character has learned anything but simply because she’s the hero of the film and that’s what heroes do.

The cliché of the martinet chef may be ubiquitous lately—thanks, Gordon Ramsay—but it’s one that audiences have loved for years. Ramsay is credited as an executive producer (one of many) on Burnt, starring Bradley Cooper as a character whose similarities to Ramsay are too numerous to catalogue in this short space. Three years after self-immolating his successful career in Paris, Cooper’s Adam Jones returns to London from his self-imposed penance (shucking a million oysters in New Orleans) clean and sober but still arrogant as he sets his sights on that third Michelin star. (Don’t worry if you don’t know what that means—scripter Steven Knight has a Star Wars analogy ready to explain it.)

Burnt may be awash in enough images of gastronomic delight to satisfy any foodie, but dramatically it’s as familiar and predictable as macaroni and cheese. It may not be a challenging movie, but knowing where the plot is heading at every turn means there’s less to distract you from fantasizing about building a new kitchen so that you could cook like this. (Of such self-delusions are the movies made.)

Do young people still discover Kahlil Gibran’s The Prophet the way they did in the 1960s and 1970s? Some must—the book, which was first published in 1923, has never been out of print in the US. It’s surprising that it took until now for a film to be made of it; perhaps the 1973 adaptation of Jonathan Livingston Seagull was to blame.

As with all inspirational literature, it’s easy to mock the uplifting platitudes of Gibran’s book, but there’s a reason it has been so popular for so long: His thoughts on topics from birth to death and everything in between are genuinely, well, inspirational. The film features the work of nine renowned animators, including Bill Plympton, Nina Paley (Sita Sings the Blues), and Tomm Moore (Secret of Kells), illustrating particular chapters, set into a frame story by Roger Allers, who supervised Disney’s The Lion King. The Disney influence is most apparent in the characters, which have been expanded to include a silent little girl and her mother who accompany the prophet Mustapha on his journey. But the backgrounds lack the usual Disney ostentation, which keeps the sights from overpowering the words. And you couldn’t ask for a better reader than Liam Neeson. It opens Friday at the North Park .

If you grew up in California in the 1960s and 1970s and had any interest in music, you probably shopped at Tower Records, because if it was recorded, Tower had it. On the evidence of Colin Hanks’s documentary All Things Must Pass, it was apparently a swell place to work at as well: Owner Russell Solomon maintained a family atmosphere among employees through the chain’s international expansion and up through its collapse a decade ago; more than one former executive chokes up as they talk to the camera about those final days.

But if there wasn’t a Tower in your part of the country—Western New York never had one—the movie may leave you a bit less misty-eyed. Hanks only passingly offers commentary on the greed that consumed the record industry in the 1990s and doesn’t seem to recognize how many independent stores were put out of business by Tower’s expansion. The movie might have been more entertaining for otherwise uninterested viewers if it served up more sleazy stories from the days when LA was the music capital of the world and every rocker haunted Tower; those stories are undoubtedly there, but only hinted at here. It opens Friday at the Eastern Hills.