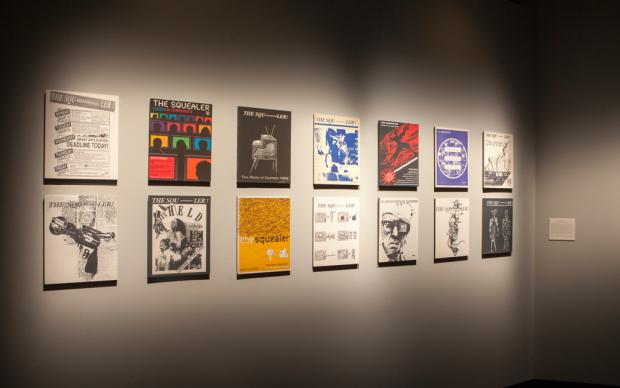 Six reels of film and video—each with a dozen or so offerings to pick and choose among from touch-screen menus—in the Squeaky Wheel 30th anniversary exhibit at the Burchfield Penney Art Center.

Experimental artwork by and large. Some of it funny and imaginative, some in a range from puzzling to baffling, some important inasmuch as telling stories that need to be told, and nobody else is telling them, particularly the mainstream media.

Nobody does the First Amendment better than Squeaky Wheel, particularly through its protest and activist group activities documentations, but also its youth media programs. In an age of technology as default chief means of communication of current events and opinion, nobody is doing more to train and educate young people—the voices of the future, if they are to become audible—in the use of film and video equipment, and provide them with equipment—to which they would otherwise simply not have access—than Squeaky Wheel.

Especially poor population young people, and others historically disadvantaged in terms of technological training and access to technological means. Through programs such as the Buffalo Youth Media Institute, geared to teaching young people all aspects of filmmaking and at the same time introduce them to local culture and history; film and video workshops with Native American teens, in collaboration with the Native American Community Services organization; YO! Buffalo, a media literacy and film and video production program for Youth Opportunity Program participants; and TechARTS for Girls, just what it says.

Among the youth work products is a graphics visuals video on patterns of policing in the City of Buffalo, east of Main Street versus west. A piece on graffiti art, with a hip-hop narrative around artist interviews. And one on Guercio’s Market as West Side commercial and social institution, not neglecting the story of the immigrant origins of the Guercio family, from Cefalù, on the north coast of Sicily, by Matt Rouselle.

Among the activist organization documentaries is a piece on the Clean Air Coalition and affected community members’ efforts to limit Tonawanda Coke Corporation pollution. Another on conspicuously non-violent demonstrations of a vaguely political nature at Artpark and other state parks around the time of the Vietnam War and general police paranoia about social and political ferment, resulting in numerous arrests and fines of demonstrators on a variety of dubious charges. Another piece about Prisoners Are People, Too.

Axlegrease comprised works for public access TV when public access TV was new and exciting. It is no more, and in an effort to redefine and repurpose the category, the name was later changed to Artgrease, but the repurposing is ongoing. The Axlegrease/Artgrease work on show includes a deadpan comical street interviews segment by Ron Ehmke and Richard Wicka. Another piece on animal migrations. Another about two men with beards.

Squeaky Wheel started up in 1985 to fill a void when Gerald O’Grady’s pioneering Center for Media Study suddenly closed shop and the substantial and vibrant Buffalo media arts community was left without a home base or access to equipment. Film and video works by the artists who got Squeaky Wheel going and kept it going are on the founders’ reel and the former and current staff reel. A range of journeyman experimental work. None of it more to the point of Squeaky Wheel’s core inspirational and motivational concept than a work by Jody Lafond twitting the pomposity and inanity of the mainstream media. Unofficial video of some official activities of Channel 2 News personalities Ed Kilgore and Barry Lillis. The piece ends with a phone call from someone at Channel 2 telling Lafond in a stern and threatening tone to cease and desist.

Could this exhibit be improved? Maybe if all the films and videos listed on the touch menus—and the touch menu connections to call them up—worked.