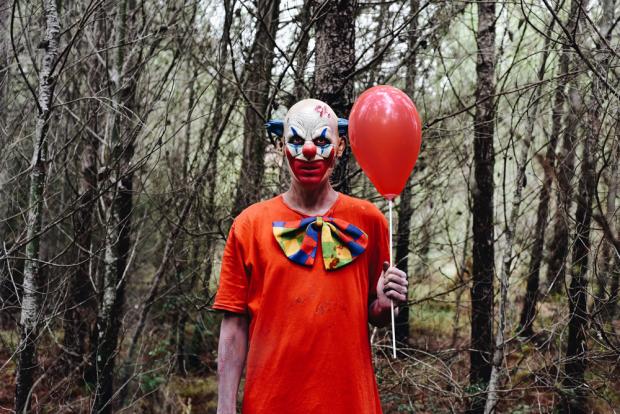 Now get you to my lady’s chamber and tell her, let her paint an inch thick, to this favor she must come. Make her laugh at that.

—Hamlet, Act V, addressing the skull of the jester Yorick.

How can we tell the dancer from the dance?

—W. B. Yeats, “Among School Children”

You’ve all heard about the creepy clowns. The flap may have started recently in England, but by now reports are all over the States, including New York, even Western New York, where sightings in wooded areas near schools and playgrounds have been rumored to be attempts to lure children. Some lawbreakers have indeed started taking clown-masks as disguises, and Johnny-Come-Latelies love getting a rise out of people.

But most of these creepy clowns are elusive enough to qualify as apparitions like other standouts of our contemporary paranormal mythology, including ghosts, most UFOs, mystery monsters, and “the Vanishing Hitchhiker,” which may be completely an urban legend.

There is something demonic about a clown, isn’t there? I’m not the first to see it. Clowns have been the devils of many a horror flick. The force of polarity—the child’s entertainer, the humorous figure—being used as its opposite gives it clout. How many other seemingly harmless things make good villains? Little girl ghosts, enchanted dolls…can you spell “Chuckie”?

Since Kreepy D. Klown seems to be the bogie of the season—and it is the season—maybe we should ask a few questions of ourselves. Why does the image stand so ready at the edge of consciousness and appear at the eye-corners with the slightest suggestion? Why does the clown haunt us? Some answers could come from its derivation.

Our clown has many ancestors, the oldest probably the shaman. Often a masker, and presumed to be a shapeshifter, the shaman was a teacher, a culture-preserver, and a spirit-guide ministering to the collective psyche. Since disease was once thought caused by “spirits” (or curses), this walker between the realms of natural and supernatural was a healer of the body, too. Close to home, the Iroquoian Medicine Masks Society are healers.

Our clown is an obvious clone of the Trickster, a major figure of storytelling cycles in many preindustrial societies, hence providing cultural teaching and entertainment. This is the light side of the clown. The Trickster is clever and powerful, but he/she would never really harm us. He/she exists partly to make us see our own quirks and therefore to become more tolerant of others.

The Greek/Roman woods-and-wine god Pan/Dionysus/Bacchus is a Trickster. The Viking-age Scandinavians likewise deified theirs—Loki. Trickster appears as Monkey to many Asian societies and Coyote to Southwestern Native Americans. The Iroquoian culture-hero Skunny Wundy has a lot of Trickster in him.

As a performing artist, we start to see something like our clown on the Greek and Roman stages. Classical clowns were usually oafs, though, the butts of jokes and not the makers. They had no standard costuming.

Societies developed enough to have kings and courts usually had jesters and fools, and we get closer here to our clown’s getup. Jesters/fools often serve as emotional teachers and healers by being freelance social comics pointing out the quirks in their societies and the foibles of people within them. We can all use the occasional dose of get-real. It can make us better beings. It can also be funny, at least to others.

Our clown’s most direct precedent in form—whiteface/mask, technicolor suit, funny headgear—is probably the Harlequin. You’ve all seen the Harlequin, that masked or made-up, checker-suited, often felt-horned character. A complex, mysterious figure of the Renaissance stage, the Italian commedia dell’arte, the Harlequin became popular all over Europe in a sort of revival starting in the late 1700s. He probably came from the Devil.

The Medieval Church used the passion, mystery, and miracle plays to entertain and instruct Europe’s largely illiterate population. The Devil was a common figure in these Biblical and moral stories, and he would have needed his own look. The medieval Devil’s costume had to say from a distance that he was both bestial and sylvan. (Most cultures have sensed that the supernaturals dwell not in the human community but in the natural realms, typically the woods.) The Harlequin’s checkered suit probably suggests the leaves of the forest. The horns on the head probably came from the goat-horned Classical pans and satyrs, for whom our Devil is a dead ringer in many depictions. (Pan was also associated with lust. We still call it “getting horny.” And lust was one of those things the Church needed to break to the bridle of the culture-stabilizing nuclear family.)

At the end of most of these passion/mystery plays the Devil would have been reproved, if not pitched off the stage, hence Old Scratch became a figure of slapstick, which is probably how anybody got to think that something that looked like him could be funny. We’re getting closer to the sinister side of our own clown. Take a look at mass murderer John Wayne Gacy in his “Killer Clown” getup and tell me you disagree.

There is also the suspicion that the clown—this gender-bending, posturing, made-up human form—represents a sexual challenge. We don’t know what it’s thinking behind that mask. We don’t know if it’s the gender we like or the one we shouldn’t like. Its broad leering gestures could quite well have other meanings. Its overtures to children are suspicious enough.

The clown’s usually pallid image can represent to us our mortality as well. For many world societies, white is the shade of death, the customary first hue of decomposition. The pale face reminds anyone of a skull.

All of the above is daunting enough, but I think the reason the clown is so provocative an image is that it’s within us. The clown is an archetype—an image-form that resonates within the collective unconscious.

Not everybody buys into the idea of the archetypes. This isn’t the place to develop it. But the notion is out there that these universal image-forms—outlines, mental constructs, not physical things—are part of humanity’s inherited wiring, and that when something we read or see evokes one of these primal images skillfully, it strikes a chord in most minds. The most powerful human-role archetypes have been categorized into a dozen or so rough forms, including the Father, the Great Mother, the Hero, the Mentor, the Shadow, the Devil… The Fool/Trickster/Clown is right up there with them.

It’s also thought that sometimes a strong image can overlap archetypes. To me, the clown is a mix of several, obviously Devil and Fool. But I think the reason the clown tests us so is that, as a potentially sinister morph of the human form, the clown stands for the dark side within us all. In the clown, most of us see our Shadow.

For Jungians (a la psychoanalyst Carl Jung), the Shadow is (partly) our animalistic side, our uncontrolled impulses. We dread the Shadow coming out and taking over. We dread what we might do on our worst day and if there were no auto-controls—the conscious mind—upon us. Asylums and jails are full of people who cannot repress their Shadow. World War II was a theater for the Shadow. To most of us, the representation of our own Shadow is as terrifying an image as any werewolf.

Pardon these ruminations, which have established only one thing: The figure of the clown pushes a lot of buttons. Its last entrancement could come from his/her act itself, from which the clown is inseparable. Think about it.

Poets, painters and potters execute their arts. They are not the things they make. Musicians and comedians perform their arts, but they do not live them.

Like only the dancer, the antic, inscrutable clown embodies his or her art, which ceases to exist completely when the performer steps out of guise. The clown is even more mysterious, as the clown is always disguised. I imagine on Halloween night we may have a legion of Kreepy Klowns. At least now you have some theories about why they touch nerves.