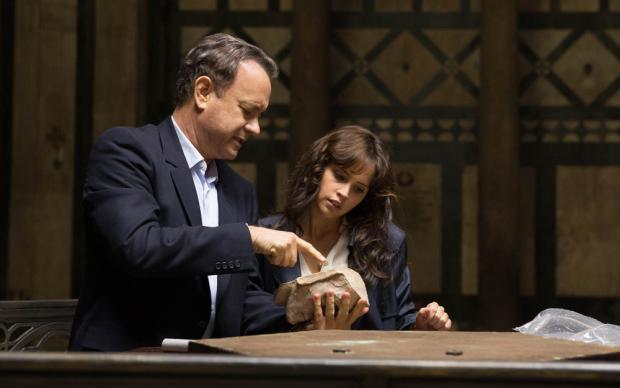 English majors, such as I once was, write a lot of essay exams, often of the “compare and contrast” form. Seldom do I recall getting anything as easy to C&C as Inferno and Jack Reacher Never Go Back: two sequels, based on best-selling series novels, both starring Hollywood heavy-hitters (a dying breed) named Tom.

Tom Cruise is Jack Reacher in the second of two films to put that character’s name right there in the title, in case there’s any chance that fans of the 21 (so far) books by Lee Childs somehow do not know to get themselves to the movies. For you non-fans, Reacher is a former officer in the United States Army Military Police Corps, now a wanderer who spends his time righting wrongs as he finds them. That he’s a hulking 6’5” means he’s pretty good at knocking around the bad guys. Casting the much shorter Cruise irritated a lot of the books’ fans, but made sense in film terms: No one likes to see big heroes beating up smaller villains.

Clearly Cruise was interested in another franchise character to give him something profitable to do in between Mission: Impossible movies. But while the first Reacher movie had its moments (how can you hate a movie that casts Werner Herzog as the bad guy?) this one is substantially duller. The minimal plot has Reacher investigating a conspiracy to sell surplus Army weapons on the black market, a bare-bones frame for a lot of generic running and shooting. He’s paired with a female counterpart (Cobie Smulders) and a possible daughter (Danika Yarosh), but any thoughts that the character might get domesticated are dropped as abruptly as they were raised. Perhaps Cruise lost interest in the character when he realized that, as he enters his mid-50s, an action character like this isn’t one he’s going to be able to play a lot longer.

There’s no reason why Tom Hanks, on the other hand, can’t keep playing Robert Langdon well into his dotage. Langdon, you will recall, is the Harvard professor of religious iconology and symbology, Joseph Campbell by way of Indiana Jones, who features in the novels of Dan Brown. Under the direction of Ron Howard, these have hit the screen as the inane The Da Vinci Code, the cheesily entertaining Angels and Demons, and now Inferno, which like its immediate predecessor nether takes itself very seriously nor pokes its tongue through its cheek.

This time Langdon is trying to track down the location of a virus whose release will be triggered by the death of brilliant billionaire Bertrand Zobrist (Ben Foster). Zobrist’s bête noire was overpopulation: Figuring that it’s better for humanity to suffer now rather than putting it off for the future, he commissioned a virus that would bring the world population down by 50 percent.

This is news to Langdon, who we first see waking up in a Florence hospital with a gash in his head and amnesia covering the past few days. Chased out of sick bed by a hail of bullets in the company of his beautiful and brilliant ER doctor (Felicity Jones), he uncovers clues to his predicament that lead him into a search for Zobrist’s killer bug.

It’s hard to describe too much of this plot both because it’s filled with surprises (some of the things that may strike you as ridiculous are in fact not what they seem to be) and partly because it’s preposterously baroque. I gave up on trying to follow the exact nature of Langdon’s scavenger hunt about halfway through the movie and contented myself with enjoying other things about it. For one thing, it’s loaded with what I will call museum porn, scenes set in world museums that allow us to ooh and ah and wish we could afford to visit them. (I bet Peter Greenaway considers these movies guilty pleasures.)

There are also entertaining supporting performances, by the great Indian actor Irrfan Khan, who makes me want to start speaking English in an entirely different way, and Danish actress Sidse Babett Knudsen, last seen trying to seduce Hanks in A Hologram for the King.

If you’ve read the book, you’ll want to know that the ending has been changed rather substantially. Fans are complaining about this big-time on the millions of places online where people go to bitch, but really, wouldn’t you rather see a movie where you don’t know the ending in advance? And if you go see it with people who have not read the novel, think how much fun you’ll have recounting the “real” ending to them in great detail afterward.