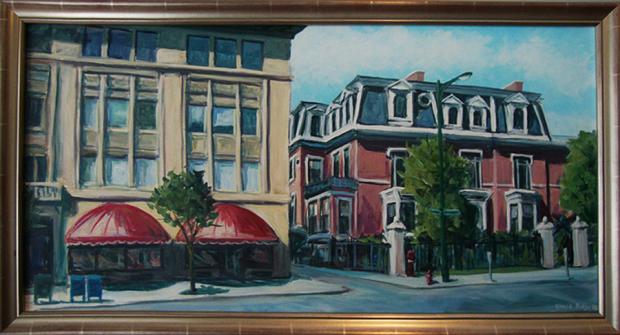 Works by regional artists from mid-19th-century Hudson River School students to present-day practitioners are featured in a show inaugurating the Dana Tillou gallery’s new location at 1478 Hertel Avenue, near Sterling. Previously—for more than 50 years—the gallery was at Virginia and Franklin streets in Allentown.

Among the highlights, a brilliant sunlight and shadows view of a trio of grain elevator silos and environs including foreground dock area and sole worker with lunch pail and background azure blue sky and darker blue Buffalo River, plus distant but unmistakable across the river, the Edward M. Cotter fireboat, by Buffalo artist Walter Garver; two works by Leroy neo-impressionist Colin Coots, one of a polo match close encounter of a horsey kind, the other of paddlers in a canoe on what looks like a mountain stream amid colorful fall foliage, a work reminiscent of the work of Winslow Homer; and Delaware Avenue streetscape view of the handsome exclusivist Buffalo Club, plus part of the old Pitt Petrie building next door, by Harold Dodge.

The Hudson River School example is a large-format work by Walter M. Oddie, who lived from 1808 to 1865 and painted numerous mountain bucolic scenes, vistas. The work on show is dated 1852 and entitled New England Summer Landscape. It depicts a remote locale farm house and outbuildings and small mountain lake with several cattle wading in for a cooling drink, and on the far shore a courtship scene, a swain assisting a damsel into a small boat for a leisurely evening row around the lake.

There is an Alexander Levy large watercolor template for an advertisement—with one portion of the piece left blank for individual vendor information to be added in—for an Aeolian Vocalion, an elegantly crafted major furniture piece combination radio and record player seemingly. The painting shows a man and woman in World War I period dress sitting dreamily being entertained by their console, evoking a medieval royal couple—depicted in the air space above them, as dream imagery—in similar postures but literally enthroned, being entertained by a troubadour.

A fold geometrics work in red and black by Julian Stanczak, one of the early practitioners of Op Art. Two paintings by John Yerger, master of trompe l’oeil representation, including a portrait of a Dutch burger—black fedora and tunic and white lace collar—in the style of Rembrandt and with a notable trompe l’oeil feature. And one by Yerger’s prize student, Leslie Formalik, displaying her trompe l’oeil chops. A slate blackboard—that is, painting of a slate blackboard, and passim—with a chalk drawing of a mouse and as if taped-on slightly blurry photo of kittens in a box. Trompe l’oeil as a cat and mouse game somehow.

Two works by realist artist Paul Turecki, one a view from old mountain boulder rocks—cracked and disintegrating before the viewer’s eye over millennia—overlooking mixed evergreen and deciduous forest, and ocean or lake waters. The other depicting pigeons in flight, realist with a surrealist touch.

And one of the famous Evelyn Cary Rumsey Pan-American Exposition posters of the falls personified as a misty maiden, and in the distance, a small cluster of factories—probably more meant to represent Buffalo than Buffalo Road—spewing smoke.

The exhibit continues through mid-November.