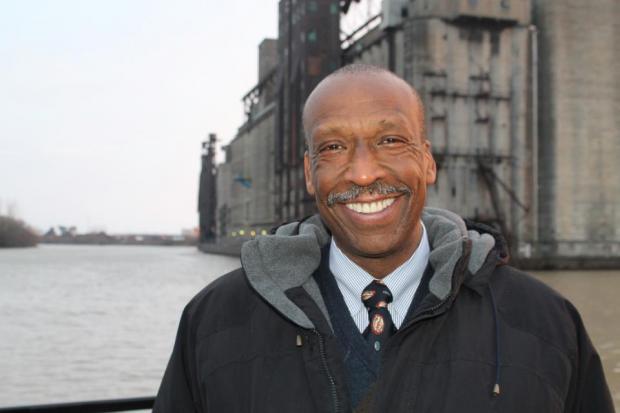 Terry Robinson is running for mayor of Buffalo on te Green Party line. We asked Robinson—a former Buffalo police officer, a founding board member of Preservation Buffalo Niagara, a political and community activist well known to government officials in Western New York—to tell us about his candidacy.

Why are you running for mayor?

I am running for mayor to improve the quality of life and well-being of the residents of the city. I am running to assist in changing the course of the national political discourse by providing an example of pragmatic progressive governance. I am running to encourage the growth of sustainable practices and vision for seven generations and I am running to bring into the conversation of this election real issues of legitimate concern to the citizens of Buffalo.

What are you biggest criticisms of the Brown administration?

What would you do differently?

I would operate government for the benefit of the public without regard to special interest or political favor. I would train and equip the public workforce in a manner consistent with the best standards, compensate them accordingly, and hold them accountable for their performance.

What would you do that’s new?

I would approach the planning and operations of the city in a holistic manner consistent with a high standard of environmental and economic justice consideration. I would eliminate the patronage requirement for employment consideration and encourage open access to records and transparency. I would promote innovative user-friendly technology and I would approach challenges and solutions from a regional perspective.

Why the Green Party? How does that party jibe with you personally and politically?

The Green Party’s values align most closely with my own personal values. I could no longer, in good conscience, support the local Democratic organizations. For over four decades, I identified as a Kennedy/labor Democrat committed to civil rights, equal protection under the law, and due process. Political advantage and self-interest over principle became too dominant as the determinant of the party’s orientation.

Most folks consider this effort quixotic—as if you’re an also-ran before the race is even over. How do you address that/ How do you win? And, if you don’t win, what do you hope to have achieved by means of running?

In the Buffalo mayoral election of 2017, people’s vote will make a difference, whether they cast them or not. I believe that enough people will have an interest in rejecting the business as usual political standard that has extinguished political vitality, competitive innovation, and crippled economic growth. I win by informing people that this election will make a difference in local, state, and national political conversations, I win by presenting a sound alternative to a decadent process. If we do not win, we continue to awaken the sleeping giant of political accountability. We nurture and feed that green giant as a 21st century antidote to the toxic political situation.