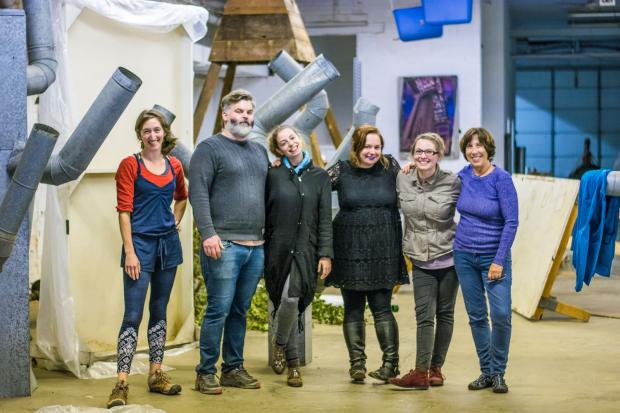 Afirmative Project director Galia Binder (third from left) and a host of the creators whose contributions and collaborations make the initiative. Photo by Emyle Watkins.
by
Emyle Watkins
/ Oct. 25, 2017 7am EST

To create art often means to challenge culture. One local collaborative though, has begun to ask whether art can create a new culture, one that is radically affirmative and promotes justice.

Three months ago, the space at 44 17th Street was just the expansive studio of Buffalo artist Jim Bush. Upon entering, one was greeted by the exceedingly large backdrops and white brick walls, with Bush’s equipment scattered about the 1905 former stable. This space was to become a cathedral for the different, a holy place for those wishing to explore a process that boasted uncertainty and wished to truly encounter vulnerability.

Now, the space sits abundant with wooden structures and “trees.” On any given day, a myriad of artists find themselves scattered about the space.  Often, violin erupts from one corner of the space, echoing through to places of conversation and creation.

One woman sits towards the back, folding hundreds of paper lotus flowers representing those who have passed from this life. An aerial dancer comes back to the ground, the swishing of sand and feet on paper create a soft sound. In one side room, sits Galia Binder, watching a clip from Marina Abramović’s The Artist is Present piece at MoMA, and discussing performance art with several artists.

“Yeah, she’s a very inspirational artist for me though, for sure,” Binder says, following the group’s eruption of excitement and laughter when Abramović is presented with an emotional reunion.

Binder, a 2014 graduate of Tulane University with a Bachelor’s degree in Cultural Anthropology, is currently a Master’s of Fine Arts candidate in the University at Buffalo’s Department of Media Study. Her interest and work is focused on social practice, ritual, and healing.

The transformation of 44 17th street into a collaborative experience, was her brainchild. Named The Affirmative Project, the “community-based social practice art initiative,” first began as a disability-focused art initiative where Binder had hoped to bring Buffalo’s disability community together through art with a focus on the affirmative model of disability.

The affirmative model of disability is the concept of a society that has a non-tragic view of disability and impairment, with a positive view of this identity. Binder cites her inspiration in the disability art scenes in the United Kingdom and Canada.

“I really wanted to bring that to Buffalo, but the disability community here kind of rejected it, and I wanted to work collaboratively with them, so it’s like if they didn’t like the project, then there was no point, because again, I see my art practice as an act of service, and as an act of collaboration,” Binder said.

Binder says she encountered that the focus on disability in Buffalo is more individualized, and that the project wasn’t favored, so she decided to refocus.

“I’m not going to force that or push that. I go back into myself, and say ‘Okay, I respect you, there must be, I need to look at myself and realize that something is not lining up at the core of me and at the core of my intentions,’” Binder added.

Coming from this, Binder decided to expand the concept of her initiative and develop it into a broader scope, still with a focus on affirmative ethics. The Affirmative Project was to become a place that valued a radical sense of inclusivity and accessibility.

“I feel that it [The Affirmative Project] is an all-inclusive artistic endeavor involving numerous artists and musicians working together. Reaching out to the community was a major part of this project, as well as representation of various types of marginalized people. The oppression of current socio-political power structures played a major role in this project,” said Florian Ayala Fauna, a “creator” within the project.

Binder put out an open call for “creators” on June 1st and began assembling a team of over sixty local artists and art groups, including the Buffalo Gamelan Club Players, Starlight Studio & Art Gallery Artists, and PDDance of Western New York (National Parkinson’s Disease Foundation). Many creators found their way to the project though the Facebook event, such as creator Steph Dugan.

“I got involved with The Affirmative Project back in August, and I had seen an ad for it on Facebook, and what really drew me about it was the fact that it was collaboration. So you were taking, you know, multiple ideas and putting it together in a space where you could create something that hasn’t been done before,” Dugan added, “and doing it in a way that was healing.”

Others, through connection to Binder, were approached with an invitation to join the project, such as the PDDance group, which uses dance to battle the symptoms of Parkinson’s disease. PDDance has performed around the City of Buffalo and was invited by Binder to participate in the project.

In two months, Binder had assembled a massive team of many disciplines and backgrounds. The group came together for the first time in the space on September 1st. While some creators knew each other or of each other through the Buffalo community, some had little or no connection when they first began working together.

“I think it was nice, meeting new people. Some I knew, some I vaguely knew,” creator Robert Harris said. Harris describes himself as an “omnipresent” figure in the Buffalo art community.

Beyond the goal of the project being radically inclusive, Binder also aimed for a project that was radically collaborative. While directing the project, Binder took a distanced approach to her leadership, allowing for creators to dream and create the project together with less direction from her as director. Groups of creators formed, and began building up different parts of a show that would be the end-goal of the project. Binder helped each of these groups through this project, often facilitating dialogue and handling the emotional labor needed to maintain balance and a truly open collaboration.

“This project is so emotional and emotionally, spiritually and physically demanding because it’s not a conventional process,” Binder paused, “in that it is highly collaborative, like, to the point that boundaries get really difficult, in terms of negotiating process vs product, and like, supporting people in their traumas and their illnesses.”

Not all creators had been a part of collaboration in the past, and for many, the process was difficult at times. There did come strength though, from the challenge of a truly collaborative work.

“I would say being able to work with others in general, which I haven’t done in at least four years. It’s a scary idea, but I was able to be more free and open to it,” Fauna stated, when asked about what she gained from the project. “ I was able to work on large paintings and art pieces for the first time in years, and there was something extremely liberating to that. Being disabled, the idea of being able to keep up with working on art seemings daunting. But this has inspired me a great deal to push myself to getting a studio some day.”

At the heart of the mission for being radically inclusive, accessible, and collaborative, is learning how to care and how to heal. The Affirmative Project dared to create a culture that allowed for new terms of vulnerability and trust through the collaborative method. Through this trust and reliance on each other, creators were able to share their stories and create a dialogue that allowed for individual healing. This concept is part of the core of social practice art.

The Affirmative Project’s final show is aptly named Between People, emphasizing the space the creators have held together and held between each other, and hope to hold with the audience.

The title, came from a conversation Binder had with creator Matthew Crane, where she recalls him saying, “God is the space between two people.”

Between People is a relaxed, site-specific hour and a half participatory affirmative ritual, where participants are invited into the space and invited to interact within the space. The performance incorporates multiple disciplines to create an “aesthetic environment and immersive journey.”

The Affirmative Project has challenged itself to create a culture where assimilation should be rejected and multiple perspectives are affirmed and represented. Radical inclusivity and collaboration has allowed for creators to develop an immersive experience that has not only allowed for healing and growth in their lives, but hopefully an experience that will transform viewers and be a model of a more just community.

“So maybe, the biggest thing I learned from this was just the process itself, you can come up with better ideas in the long run if you’re bouncing ideas off of each other, and you’re doing it for a purpose, and you’re not putting yourself above anyone else. I feel like that would be really good in the community, and especially in today’s world, to work together, to create, and to also just do good for people, and do good for the community,” Dugan said.

Binder has also expressed that the immersive experience participants will go through is one that the creators have gone through themselves.

“So I’m in a space right now where, I once again feel as if I’m encountering the performance before the performance is happening, so in other words, we are going through ourselves what we are asking the audience to go through.”