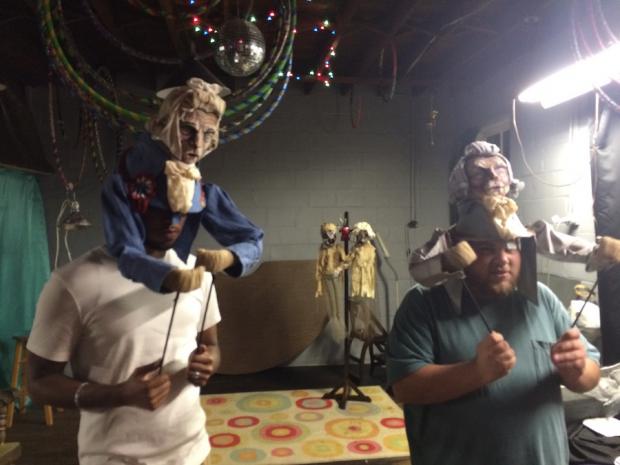 Among other things, privilege affords people the ability to be tourists in political struggle. When you live above the fray, you’re free to dive in, make your voice heard, and exit when the going gets too rough.

That, in a nutshell, is the phenomenon that director Bob Van Valin of Post-Industrial Productions wants to explore with his production of Heiner Müller’s The Task, which goes up at the Alleyway Theatre starting November 10. He’s hoping that people won’t want to be mere tourists in theater, either, asking patrons to support the production through crowdfunding platform Indiegogo.

“It’s simultaneously a way to get funding and get people interested in the show,” said Van Valin. “It’s a great way to give people an idea of what the show’s about and whether or not they’ll be interested in it.”

Tickets, an advertisement in the program, and even a producer’s credit are among the incentives to donate.

The Task follows a trio of revolutionaries who, following the success of the revolution in France, are sent to a plantation in Jamaica to ignite a slave revolt. One is a peasant; one is a freed slave; and one is a middle class doctor and heir to the plantation. The play floats along dreamily, examining the disparity between what’s at stake for different political actors while invoking everything from supernatural visitation to semi-autobiographical scenes cribbed from Müller’s own life in East Berlin.

For Van Valin, the themes of The Task are especially relevant to the current American political climate.

“There were a lot of Bernie Sanders supporters in the primary who got really political and maybe weren’t before… but when he lost the primary, they didn’t care anymore,” said Van Valin. “I think a lot of those people had a little bit more privilege and could go back to their lives and say ‘That was fun.’”

“Contrast that to Black Lives Matter, where people literally have their lives at stake and cannot stop fighting. That contrast is kind of the heart of this play.”

The point isn’t to scold or shame, people, necessarily—it’s to ask them to think. To accomplish this, the play utilizes a healthy amount of unreality. On top of Müller’s dreamy dramaturgy, Van Valin’s introducing a handful of multimedia elements, including experimenting with puppetry.

When I visited Van Valin’s rehearsal, the actors were blocking out one of the play’s main puppet scenes, a surreal Punch and Judy-style showdown between Maximilien Robespierre and Georges Danton, leading figures of the French Revolution. In the script, Müller imagines Robespierre and Danton in a fistfight, knocking each other’s blocks off like overstuffed Rock ‘Em Sock ‘Em Robots and playing soccer with each other’s heads. Van Valin translated that instruction into puppets which sit on top of the actors’ heads, gesticulating as the actors deliver their lines. The scene comes to blows, and while no one plays soccer with anyone’s heads, the two are both artfully (and comedically) decapitated.

Other puppets include a creepy pair of bodies in a closet and a huge, fluttering skeletal angel, all of which were designed by local artist Michele Costa, whose theatreFigüren specializes in “theatre of puppetry, mime and mask.”

In both look and action, the puppets are grotesque caricatures of human form, making them ideal vehicles for inspiring people to take a step back and look at themselves. For Van Valin, that’s the whole point of the play.

“My goal is always to give other people the experience… where they think critically about their beliefs,” said Van Valin. “Really, what their vision of the world is and how they’re going to achieve it.”

The Task goes up November 10, 11, 12, 17, 18 and 19 at the Alleyway Theatre. Tickets are available for presale through the production’s Indiegogo page.