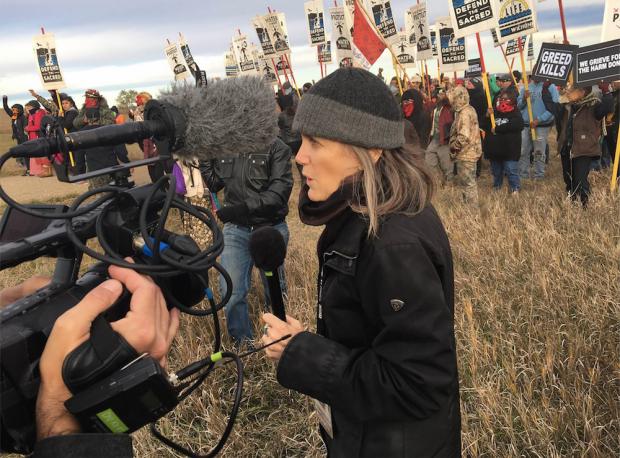 In a country riddled with fake news and unethical journalism, it’s refreshing to find a reliable news source—especially when we have a rambling, incoherent president who is a principal source of that fake news and who discredits real news outlets. Democracy Now! (DN!) is an independent news program hosted by Amy Goodman and Juan Gonzalez. The program offers a combination of investigative journalism and political commentary, with a focus on social justice issues and social justice movements. DN!’s executive producer and principal presenter Amy Goodman is making an appearance in Buffalo on November 3 for the 50th WNY Peace Center Annual Dinner. Tickets are on sale for $60, or $30 for college students and low-income individuals. Very few tickets will be available at the door. For more information about the WNY Peace Center’s annual dinner or to purchase tickets, check out their website at http://wnypeace.org/wp/.

Goodman spoke with The Public this week about her upcoming talk and the state of the media in this current mistrusting environment:

What will you talk about while you’re here in Buffalo?

I will talk about our coverage of the hurricanes that have slammed into the United States and devastated our states, from Harvey to Irma to Maria, which has just devastated Puerto Rico. And I’ll talk about everything from the climate chaos that has caused the fires happening in northern California, where I just returned from, and where context for the catastrophe there is entirely unreported in major media. When I go to these places I ask: Where are the network anchors? Where are the meteorologists? I’m talking about FOX, I’m talking about MSNBC, I’m talking about CNN. Our people are on the ground there, and we talk to others who are on the ground doing advocacy, and we don’t see the major media doing the same work, and that speaks volumes.

And I’ll talk about how the people we bring on the program provide essential context to these big stories, and how the major media forgoes that context, because they allow debate where informed people don’t. How will they make these connections—the hurricanes, the fires, these seemingly disparate events—if they don’t assume the totally settled science that is climate change? This, climate chaos, is apparent, but we are subjected over and over to a narrative that almost denies the evidence unfolding before us.

Democracy Now! reports on, and relies on for content, the work of advocacy groups. How does that work? How do you choose stories? How do you analyze them?

We are all about movements that are standing up for a sustainable planet. Like my experience  covering the movement at Standing Rock, the struggle against the Dakota Access Pipeline, a years-long effort which drew together people who did not call themselves protesters but rather water protectors. And who faced off against sheriffs. I’ll talk about the day of the dog, September 13, 2016, when DAPL guards let loose dogs on nonviolent protesters. We posted a film of that dog with blood on its mouth, and there were more than 14 million views. Any corporate news executive would drool at that attention. It gives the lie to the idea that no one cares about climate change, that no one cares about these stories. They do.

How do we choose? That is our job as journalists. To look closely, to gather information, and in our case to find the voices and the stores that are being ignored.

When folks talk about the war on journalism now, what does that mean to you? Is there an opportunity? What are the lurking dangers, what are the opportunities?

Right now we have an oppositional press critical of Donald Trump precisely because he is critical of them. He has had the press in this crosshairs. And that has created a surge in critical journalism that is welcome. But still, when it comes to climate change, there is very little resistance, and when to comes to war, there is very little criticism. I’m actually surprised that Trump continues to attack the media as he has, because I think if he stopped, the media would be very less critical of him. The proof of that is in the media’s coverage of the war in Syria. When the US bombed a Syrian air base at the beginning of the Trump presidency, you had Brian Williams praising the beauty of the US armaments. He described them in almost poetic language. That was MSNBC. That’s not FOX. The next day Fareed Zakaria said Donald Trump became president last night. That is how easily our major media comes over to the party line.

At Democracy Now!, we provide a forum for debate about the issues of critical importance to the country. Take again climate change. The Trump administration is very proudly in denial of the science behind climate change. But this is science. So it’s not essential that we bring on the program every day someone denying that science. It’s not as if we need to hear someone every day who denies the planet being round. We don’t need to to hear from someone from the Flat Earth Society. This is all settled science. But, if you accept that science, what you do need to hear is about what to do about it. And that’s a legitimate debate. There is room for disagreement on how to move forward. Our program is a good space to have that discussion, and that discussion is about nothing less than the survival of our planet.

And when it comes to war, our job is to provide a forum for a discussion of our foreign policy, about the decisions that ultimately determine who lives and who dies, and for what. And it is especially important to provide a forum for our service people, who are in this life-and-death position, and who cannot have these debates openly on their bases, without compromising their positions in the military.

Democracy Now! broadcasts on 1,400 stations across the country, audio and video. Not in Buffalo, and that’s a long-simmering discussion here. How important is that traditional media reach for you?

It’s a testament to the hunger for independent voices. We began in 1996, with 14 stations carrying us. Then, on September 11, 2001, we were the closest to that devastation and our coverage was widely carried, and as a result our very critical coverage of the runup the first Iraq war was widely carried too. Since then we have continued to find a wider and wider audience seeking news that they know is independent-minded, that is not beholden to corporate sponsorship, and that focuses very closely on issues of importance to them.

Traditional media is important because we know we have to reach out to people where they are. We know we can’t count on them to come and find us. We’d love to be on the air in Buffalo, and I’m sure we’d find a regular audience there.

The Western New York Peace Center marks its 50th anniversary on the evening you’ll be speaking at its annual gala. It has been active without a break since 1967. Say something nice about these folks.

Happily, organizations like the Western New York Peace Center, people who are single-mindedly dedicated to creating a better world, a more peaceful world—they are not just our audience, they are the people who create the stories we cover. We have covered their work, in fact, including their advocacy against drone warfare. I’m proud to be a part of this event, to talk to and with people who are committed to peace and justice and a better society.