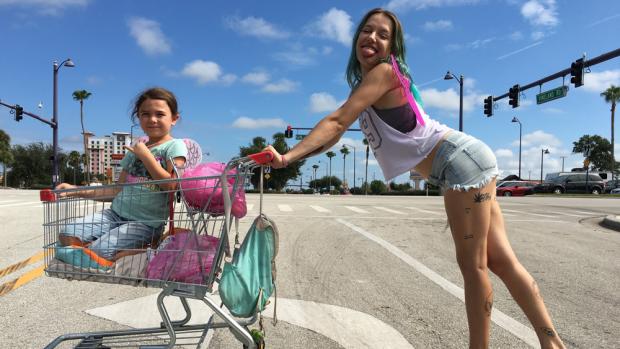 The first thing we see is two young children, a boy and a girl, sitting on an outdoor floor against a wall. Their clothes and the colors, along with the light, identify the scene as Florida, just in case you didn’t know the title of the film. The girl is kicking her leg impatiently, as if sitting still is something she can barely stand to do.

Her name is Moonee (Brooklynn Prince), and she doesn’t sit still much throughout The Florida Project, the new film from writer-director Sean Baker (Tangerine). She is six years old and on summer break, and at some point in the movie you are likely to pity the teacher who will have to deal with her in the coming school year.

Moonee lives with her mother Halley (Bria Vinaite) in a motel on Orlando. It’s not far from Disney’s Magic Kingdom theme park, which is why the motel is called The Magic Castle. But it might as well be a million miles away, a pastel-painted flophouse for people left behind by the American dream.

Not that Moonee knows any of this. She’s a kid, out of school, unsupervised by adults, and the world is her oyster. She and her friends Scooty and Jancey roam the area at will. They know how to wheedle strangers for ice cream money, and where every hole in every fence is. At one point they find the best kind of playground a child could want: an abandoned housing development, filled with stuff to explore, break, and even set on fire.

Of course, we responsible adults in the audience know that this stuff is bad for them. We know all kinds of things that Moonee doesn’t know, like how awful her mother is. Halley appears to be in her mid-twenties, and that Moonee has a father is something we only surmise from our knowledge of biology. She’s little better than a child herself, a playmate for her daughter. The best that can be said for her is that she has some standards—she lost her last job as a stripper because she balked at back-room work—and she doesn’t do hard drugs. But she is clearly not coming to a good end.

This may well sound like depressing stuff, an update of Luis Bunuel’s shocking Los Olvidados, which it occasionally resembles. But working in verite style, Baker captures the blissful ignorance of childhood, the wonder of exploration and discovery and trouble that isn’t nearly as bad as the monsters lurking in wait. The film unfolds in short episodes, quickly paced, not unlike a child’s attention span. That might explain how Baker gets such commanding performances from his performers, all newcomers or non-professionals (with the exception of Willem Dafoe as the motel’s manager). It heads any list of the best films of the year by a substantial margin.

Nearly a decade after the documentary The Beaches of Agnès, which she said would be her last film, Agnès Varda (Cleo from 5 to 7, Vagabond) is back at the age of 88 with Places Faces (Visages Villages), an unassuming delight. One again the nouvelle vague veteran is exploring regions of France you won’t see on a tour. Her companion is J. R., a photographer celebrated for mounting giant versions of his portraits on public spaces. He travels with a camera-shaped truck equipped with an oversize printer so that he can work quickly. The pair share an interest in everyday faces and small villages, and the whimsical results of their travels fill the screen: a farmer whose standing portrait fills the side of his barn; old photos of miners filling the sides of the now-empty houses built for them decades ago; the wives of dockworkers at the port of Le Havre pasted Amazon-like on stacks of shipping crates. (I’m not even mentioning the best ones.) With her tiny frame, huge eyes and two-toned hair, Varda contrasts with her younger companion, who is tall and always hiding under a hat and sunglasses, but their souls are the same when they come out to play.