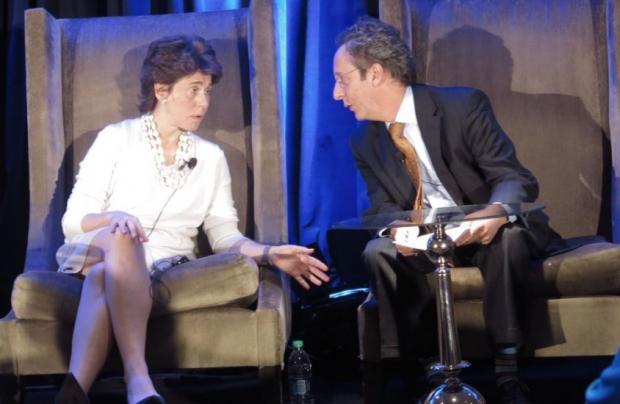 The state’s top education officials struck a measured tone when discussing the Common Core standards on Monday and pledged again to tweak the state’s math and English tests.

Board of Regents Chancellor Merryl Tisch and State Education Commissioner MaryEllen Elia used the forum, a conference for school board members from across New York state, to offer more details about how they will respond to concerns about testing, standards, and teacher evaluations. Their comments come as two efforts to re-examine the Common Core are getting underway and after a year of growing anti-testing sentiment statewide.

“This is the time for us to review the Common Core standards,” Elia said, turning to the room of school board members. “So I ask that you be part of that.”

The ballroom at the Sheraton Hotel, where the conference took place, reflected the anti-testing sentiment that state education officials are trying to grapple with. As Richard Longhurst, executive administrator of the NYS Parent Teacher Association, ticked off a list of parental complaints about state tests, the room cheered and protested “let him finish” when the moderator suggested his time had ended.

Karen Magee, president of the state teachers union, compared relying on state tests to make decisions about teacher quality to a doctor evaluating her health using only blood pressure, a decision that she said would be “nothing short of malpractice.”

As expected, neither Tisch nor Elia budged on the importance of using assessments to inform education policy. Tisch, who has previously called opting out of state tests a “terrible mistake,” tried to calm the room when it was her turn to speak.

She asked everyone to take a breath before returning to the “urgency behind the standards.” Many students are graduating with high school degrees but are placed into remedial college classes and then struggle to graduate, Tisch said.

Elia also defended assessments before outlining several specific problems with New York State’s current tests for third through eighth graders. Those tests, she said, have been too long, provide data that parents aren’t convinced is being used effectively, and put too much pressure on teachers. Instead of treating all standardized assessments as the “bogeyman,” Elia said she will focus on fixing these specific issues.

As Elia and Tisch gear up for another legislative session, where testing and teacher evaluations hang in the balance, both women said that the state legislature — which last year changed the state’s policies around teacher evaluation and improving struggling schools — should stay out of similar decisions.

“I don’t believe children should be in the middle of politics,” Elia said to end her speech.

For her final comment, she garnered some of the largest cheers of the afternoon.