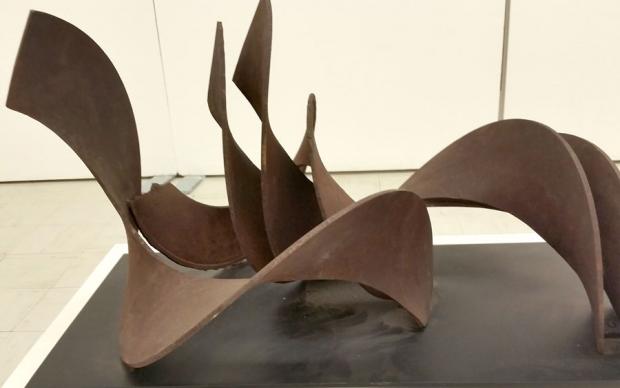 Less is more and more is less, as a generality regarding the small multitude of artworks in the Niagara Arts and Cultural Center show Stick, Stone, and Steel. Numerous found objects sculptures—some with an overabundance of objects—among much photography—also characterized by the less is more, more is less maxim—and a handful of paintings.

Prominent among works that duly heed the maxim are some sculptures in scrap iron and steel by Robert Then and Richard Rockford, who sometimes work as a team. Robert Then’s Urban Decay is composed of two deteriorating but undaunted tower elements of angle iron and rusted to disintegrating attached sheet metal elements. (Reminiscent of the last image we recall of the World Trade Center twin towers, post-catastrophe, pre-demolition.) Another minimalist more or less tower piece by the same artist is called Vector. Weathered copper and steel and wood in this instance, slightly expansive upward. A piece attributed to Richard Rockford with Robert Then is called It’s Complicated. It consists of rusted iron possible auger flight segments—spirals—in variously sequential collateral and jumble oppositional array. A stunning piece. Formally uncanny.

Whereas, too much is too much—even when the point is the abundance of found stuff—as in a work that constructs a complex culminating in a kind of voodoo figure out of materials likely found in or along the Niagara River. It’s by artist Jay Carrier and consists of old fishing poles and tangles of line, lures, and hooks, plus stones, shells, driftwood, feathers, fabric, even a little tchotchke ceramic bluebird poised on a tree branch. Another overabundance piece is a bicycle wheel with a zillion little attached items, like paper flags, fabric, flowers, stones, ribbon bits, by Cornelia Dohese-Peck, untitled.

Various other sculptures display similar over the top tendencies. Sacrificing unity to multiplicity, the sense of organic whole to a sense of incoherence.

This occurs also among the photographs. Kelly Lang with Cat Hart have an excellent photo called Stump Life. A forest decay vignette of arboreal remnant supporting vibrant colonies of brown and yellow fungi and green moss. But another in the overabundance category, called Heart of the Forest. A tree trunk mainly, and then collage effect partial overlay of actual leaves and other plant life.

Among other notable works on display, Dennis Fulton-Sears makes more or less traditional figurational sculptures out of found or otherwise acquired metal materials—sometimes altered, sometimes not—but fabricated so as to reveal new formal possibilities amid forms we thought we understood so thoroughly and exhaustively that the sculptures—handsome and impressive as they are—have a slightly—all to the good—comic flavor. No better example of this effect than in his prehistoric-looking predator fish—or maybe skeletal remains of such, or maybe in x-ray—comprising an in-line sequence of hardware pick-ax heads as fish bony structure. The same artist also has a magnificent wading bird in swamp habitat composed of found and refashioned metal, much smithied and shaped.

Mary Ellen Bossert has two intriguing wall-hanging sculptural composites of apparent found items—driftwood scraps, metal pieces, broken ceramic—plus in both cases a minimalist drawing/painting of the head and neck of a crow. A totem bird in the context. Among other totem objects.

Brian Nacov has what looks like a small spill of cast iron—about the size of dinner plate—with hard to identify impression fossil marks, entitled Jurassic Fragment.

Violet Gordon has a series of Asian art on rice paper watercolor paintings in homage to artist and teacher James Kuo. Three depicting rocks. A fourth—the best of the lot, the most subtle—more just suggesting rocks.

And Tracy Russel a comical piece consisting of a serrated table knife remnant—missing its handle, but still serviceable, if awkwardly so, seems to be at least some of the idea—stuck in some waxy substance, inside a glass box. It’s called Confirmed Bachelor.

The Stick, Stone, and Steel exhibit continues through November 12. 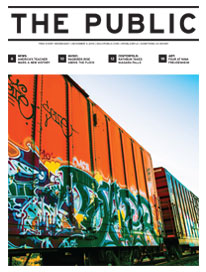