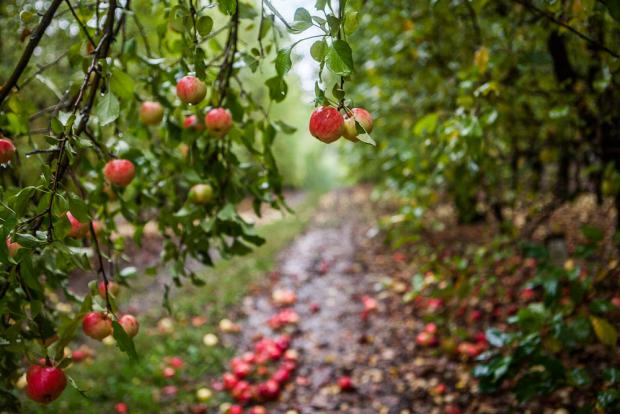 Earlier this month, in a room outside a greenhouse, two men sat beneath a cloud of fruit flies, using oversized knives to cut into the flesh of grape-sized, lime-green fruits. Generically, even colloquially, speaking: southern crab apple. Untold years of research, unknown hours of searching through tough terrain, and no doubt some element of luck have brought these oddly shaped and brightly colored fruits to a USDA research facility in Geneva, New York, where they will be the newest accession to the national apple collection. The USDA’s collection holds around 6,600 accessions representing more than 2,500 genetically unique varieties of Malus, the fruit’s Latin name. Each apple’s DNA is a figurative and literal code with the potential to unlock an agricultural solution that could make apples a better, cleaner, and more efficient food source for the world’s growing population.

The scientific name for the object of the fruit flies’ desire is Malus angustifolia, one of three American species that is native to North America. Recent research suggests that a fourth species—M. fusca, native to the Pacific Northwest—was carried over the Bering land bridge from Asia. The story of how the other three arrived in North America remains cloudy, though Dr. Thomas Chao’s best guess is that the seeds were spread in the geologically contemporaneous period of when flowering plants first appeared on earth and when the continents were all connected some 160 million years ago.

The story of how the samples into which clonal technicians John Keeton and Bob Martens were hacking with their knives got to Geneva is much more straightforward. Chao collected them himself. When Chao became curator of the USDA’s apple collection, it included samples of M. angustifolia from a number of southern US states, but had nothing from Arkansas, Alabama, Mississippi, and Louisiana. So Chao rented a car and charted a course of Holiday Inn Expresses throughout the Southeast, favoring their government rate and breakfast options. “It’s pretty standard, no surprises,” he said.

Some apples he collected from roadside trees he noticed while driving, but most samples came from trees whose GPS coordinates were submitted by amateur horticulturalists. Chao averaged about a 50 percent success rate in locating trees, faring much better if the GPS data was newer.

An even-keeled man of maybe 50 years, Chao goes out of his way to stay informal and modest, preferring to be called Thomas and casually stating facts in an unassuming way. For example, he said without a hint of irony that he logged “about 4,947 miles” on his most recent trip. It’s his way of counterbalancing the big shoes he’s filling as the successor to the now-retired Philip Forsline, who featured prominently in Michael Pollan’s book Botany of Desire and the subsequent PBS documentary. Forsline and company were instrumental in uncovering the roots of the modern cultivated apple in Kazakhstan, in the forests around towns where the team saw “apple trees were coming up in the cracks of the sidewalks,” and bringing that ecological and gustatory heritage to Upstate New York, where its lacustrine soil and cold winters are an ideal setting for apples. The state produces close to 30 million bushels every year, second only to Washington.

Our visit to the collection required a USDA security clearance for both myself and a photographer. (Chao reasons that since so few food crops originate in North America, a collection of the world’s agricultural variety is a matter of national security.) Driving through one of those change-of-season downpours along fields of corn and soy north of Geneva, we found Chao’s office among a patch of government buildings from seemingly all eras of American architectural history—as if the compound itself were resisting monoculture. There were some early 19th-century barns and Victorian farmhouses mixed in with Bauhaus-like industrial buildings and squat, one-story, postwar quick-erects. Chao found himself in the latter, in an austere civil servant’s office lined with bookshelves carrying horticultural titles and Walter Isaacson’s recent biography of Steve Jobs. Wearing noise-canceling earmuffs to shut out the incessant drone of the ventilation fan overhead and a field-ready outfit of jeans and Crocs, Chao was ready for another day at the office, which usually consists of giving tours of the collection, attending meetings, and answering emails.

It’s not just any office, however; from it Chao manages and curates what is probably the most comprehensive germplasm collection in the world for apples, cold-hardy grapes, and tart cherries. Nor does the USDA’s collection end there. There are 19 USDA facilities dedicated to germplasm collection and research for just about every crop imaginable. “This is long-term research that only the USDA can provide,” Chao said matter-of-factly.

The apples we buy at the store or farmer’s market descend from crosses between the Kazakh M. sieversii and the three wild apples native to areas west of modern-day Kazakhstan. “But where do those apples come from?” Chao said. Of the 26 species of wild apples in the world, 18 of them are found in southern China. The four species found west of China follow the Silk Road, offering a source of nutrition and hydration for travelers and cultivated by settled populations. Following the rule that the center of origin of a species is usually the center of diversity, it stands to reason the apple originated in forests of southwest China, which was untouched by the last ice age. The collection in Geneva has accessions from all but three of the Chinese species.

Individual M. angustifolia trees are numbered and marked for location by state and for year of collection before the seeds are placed in yogurt containers.

Combing the collection’s stand of tall M. sieversii trees, the “Botany of Desire block,” so called due to the book’s popularization of this 50-acre oasis of biodiversity, it was easy to see and taste how these Kazakh apples made such an impression on Forsline and his colleagues as the forbearers of the modern apple. Baseball-sized with varying colorations from green to yellow to red, when freshly picked most of them tasted like a slightly less sweet version of a McIntosh. Each offered varying notes of acidity and sweetness. Because they are not grown for any other reason than management and research, the grounds were littered with piles of fallen apples, a smorgasbord for the intrepid animal. Though an electric fence is necessary to keep out the deer, every winter Chao observes discerning wild turkeys among the apple trees, feeding only on certain varieties—what he calls “the turkey selection.”

Perhaps due to the monolithic preference for the popular cultivated varieties—Red Delicious, Golden Delicious, Gala, Fuji, McIntosh, Granny Smith—apples are very susceptible to disease and blight, and require extensive use of pesticides. The collection’s trees are no exception. Researchers hope that somewhere within the near infinite number of possible crosses that can be made from the Geneva apples, horticulturalists will breed apples that are disease-resistant and better engineered for various soils and climates. Fewer pesticides and fertilizers mean a cheaper crop without the negative side effects of animal poisoning and water pollution.

Chao notes that recent research has shown that M. sieversii has a gene that is strongly resistant to blue mold, a penicillin blight that affects apples in storage. After three or four generations of crosses between the wild apple and the one in the grocery store, apple breeders hope to achieve an apple that can fend off the fungus. But that process might take decades.

The research must go on, and that is why Chao has made the tough decision to cut down the Botany of Desire block in November, reasoning that the 1,300 apple trees represent only one percent of the total number of M. sieversii seeds collected on four different trips in the 1990s. The 50 acres allotted to the living plants has to be meted out judiciously. “We are literally running out of physical space,” he said.

The apples are grown for research only, so at harvest time fallen apples litter the grounds.

Backups of the material in the field are stored in both graft and seed form at the Geneva facility and in liquid nitrogen at the National Center for Genetic Resources Preservation in Fort Collins, Colorado.

Back in the core collection—no pun intended—varieties of apples from across the Malus family clung to their dwarfing rootstock in a steady rain. Though he briefly tried to dissuade us from dragging him out into the wet, Chao warmed up while giving us his stump tour, recalling the energy from his recent 16 days in the field, the first of which was spent in a soaking, 90-degree rain. Chao showed off the apple that Thomas Jefferson loved, Chinese crab apple varieties with tastes ranging from sour to bitter with nutty textures, and an M. ioensis tree with brilliant red leaves and walnut-sized, pastel-green fruits, his personal favorite, which had been already picked clean. “I encourage you to taste some, so that you will never forget about them,” he said.

Preferring sweeter, more tropical fruits to apples, where Chao gets most excited is describing the spring, when his thousands of trees are covered in millions of flowers. Henry David Thoreau, who aptly likened the story of human civilization to the story of the apple, was also in love with its flower. “The flowers of the apple are perhaps the most beautiful of any tree’s, so copious and so delicious to both sight and scent,” Thoreau wrote. ”The walker is frequently tempted to turn and linger near some more than usually handsome one, whose blossoms are two-thirds expanded.” Every fruit on the trees and on the ground was a brilliant flower in its recent past, Chao reminds us.

After recording the bulk of this story, I went to sleep with a certain sickness setting in. Hours later in a fever dream, I imagined my bed itself to be a repository for the genetic heritage of our sacred apple. I felt the seeds mix with other seeds, the lines around the accessions blurred and destroyed. Discomfiting and jumbled Latin names flew through my head; I feared the entire collection had been lost somewhere in my delirium until I made myself become fully awake and slowly acknowledge reality. It wasn’t exactly a nightmare. Central to the story of the apple collection is the story of civilization itself, and vice versa. The histories of both have been pockmarked with secrets and riddles since Eden (although that fruit was most likely a pomegranate); whatever it reveals, the collection in Geneva is here to keep those secrets part of the story.

Under a 100-year, $1 lease from Cornell University, the collection holds several popular open houses to the public every year, and their entire library is available by mail order for free through their website.