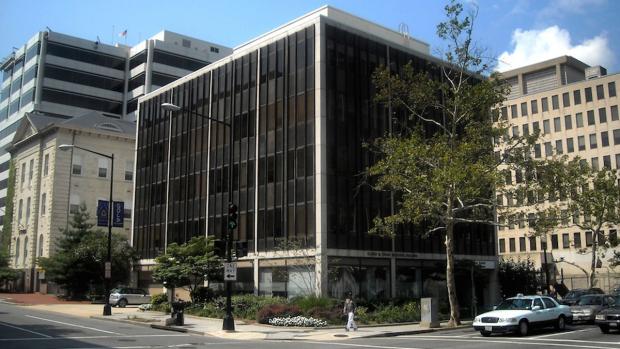 The Humane Society of the United States headquarters building at 21 L Street NW in Washington, DC. This multi-million dollar building full of lobbyists and public relations staff was paid for and is now maintained largely through those $19 contributions. Stop in and ask where all the animals are.
by
Gerald R. Rising
/ Oct. 20, 2015 10am EST

On October 4 my final Sunday Buffalo News column was published. The column, my 1,280th over a period of 25 years, was critical of the Humane Society of the United States (HSUS). On October 8 I was informed that the entire science page of the Sunday News would no longer appear so, according to my editor, “I do [sic] no longer have a place to run your column.”

On October 15 a rebuttal to my column from HSUS representative Brian Shapiro appeared in the News’s ”Another Voice” column. I find this coincidence interesting, because, as I pointed out in my original column, HSUS has a history of intimidation.

As is typical of the News, no fact-checking was done for Shapiro’s article, nor indeed was any ever done for my own columns. This throw-it-out-there-and-see-if-it-sticks approach to journalism is, of course, not specific to the News; it is standard for all of today’s media. In this case, however, it apparently contributed to the further dumbing down of this region’s major newspaper through the termination of its one page per week regularly devoted to science.

In response to Shapiro’s misleading screed I first remind you what I said in my original column. It began:

An attractive dog or cat peers out at you from your television screen, its pleading eyes sending the clear message: “Why am I abandoned?” Your heart goes out to that animal as the message comes on screen: “Donate $19.00 per month to the Humane Society of the United States.” (And get a “Humane Hero” T-shirt.)

Many do just that. HSUS’s 2013 income fell just short of $133 million. But what fraction of that amount goes to care for those pleading pets? In one recent year it was less than one percent.

Then I went on to detail some other facts about HSUS: Against that one percent for those animals in their ads, it spends 35 percent on salaries and 39 percent on fundraising. I also told the story of HSUS intimidation of its former employee Didi Culp, who was operating an animal shelter that HSUS considered competition. More significant, I wrote:

The other legal problem was as large as this one was small. HSUS recently settled with a Ringling Brothers Barnum and Bailey circus representative for $15.75 million to avoid a RICO (Racketeer Influenced and Corrupt Organizations Act) charge for bribing a witness. The society has claimed that this was forced on them by an organization they absorbed. I interpret that differently. I suspect that HSUS saw dollar signs in the circus suit when they took on their new partner and, having failed to do due diligence, were blindsided by this behavior. Who pays for those kinds of error? Those $19 per month contributions and certainly not contributions by HSUS administrators.

I indicated too my abhorrence for many HSUS policies and my agreement with Dr. Ron DeHaven, president of a veterinary organization HSUS attacked, who said, “They represent every kneejerk response based solely on emotion.” As a result of all this, I recommended that donors support local animal shelters and rehabilitators rather than HSUS.

Now consider Shapiro’s response. He begins with the claim that my column “got a lot wrong about the organization.” But what follows rebuts none of my charges: not a word about the one percent, nothing about the circus fiasco, no response to the intimidation example. Instead he makes a series of grandiose claims for HSUS. Consider two.

First he claims that those TV ad animals “were directly aided by our rescue teams, veterinary services and other programs focused on pets.” But HSUS has no rescue teams, no veterinary services, and no other in-house programs focused on pets. Instead they have a modern five-story building in Washington housing lobbyists and PR people like Shapiro. HSUS even admits on some of its ads that they don’t help those particular animals.

What HSUS does have are several “affiliated groups” that include some animal shelters. Why are those groups affiliated? Because they give HSUS a way of claiming those services.

More important, they are made part of HSUS annual reports, disguising the amounts the main organization devotes to its activities. This leads some accrediting agencies that fail to check closely to give them high marks; others see through this ruse. I spent hours studying HSUS income tax returns and other evidence and my figures stand. You too can check those returns, for they are on the web. For still more information, visit the Humane Watch and National Animal Interest Alliance websites.

So much for Shapiro’s snide demand that “Rising and others will do more research rather than simply parrot false claims about our work.” Shapiro’s idea of research is going to the HSUS website and accepting its deceptive and self-serving misinformation.

I thank The Public for providing this opportunity to respond to Shapiro’s attack on my integrity and to the Buffalo News’s reaction.

Gerry Rising is a retired University at Buffalo professor who continues to write math and natural history books.