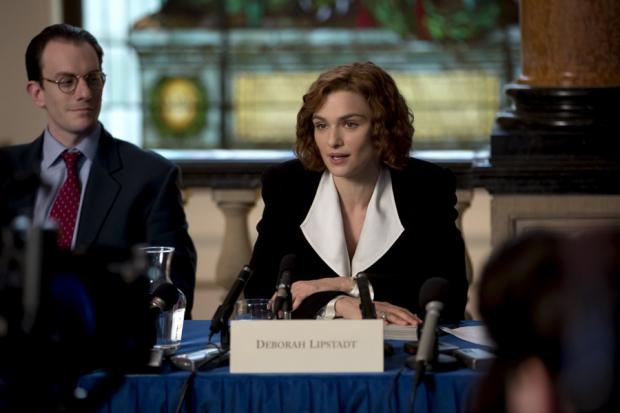 Denial qualifies as a Holocaust motion picture even though it depicts events that occurred, as one of the movie’s characters observes, over half a century after Adolf Hitler and Germany’s unprecedentedly evil efforts to expunge the Jewish people from Europe. At the close of the Second World War in Europe in 1945, somewhere from 5.5 to 6 million Jews—along with several million non-Jews—had been murdered. Hitler had promised to eradicate European Jewry, and, as one historian has bitterly commented, it was by far the promise he came closest to keeping.

But over the last several decades, an assortment of individuals and groups, variously deluded and/or cynically exploitive, have persistently challenged the historically validated extent, and even the existence of the Holocaust. British writer David Irving (Timothy Spall, appropriately loathsome) has been one of the most successful, and contrary to reasonable and moral expectations, had even achieved a small degree of respect for his historical works on Hitler and the Third Reich, despite widespread and growing distaste for his claims on behalf of Der Fuhrer and Nazi Germany.

This instructive, frequently absorbing and unexpectedly relevant movie deals with a lawsuit Irving filed in the late 1990s against Deborah Lipstadt, an American historian at Emory University who had labeled Irving a Holocaust denier and Hitler apologist in one of her books. Irving claimed critical damage to his reputation and career.

Denial, adapted by playwright David Hare from Lipstadt’s book about her legal ordeal, is a superior example of the docudrama genre—not only for its generally finely done narrative, but because the movie offers a curiously apropos lesson in the power of demagoguery to mystify events and arouse in mass audiences illusory, emotion-driven ideas and behaviors.

Irving has never achieved anything like the numbers of believers Donald J. Trump’s ugly agitation has, but attempts to rehabilitate Hitler and fascism have been disturbingly persistent. As Denial makes all too clear, Irving has been among the most effective far-right radical instigators.

And he had a very important advantage in British courts. The alleged libeler has to prove her charge, without the protection of the American First Amendment. The aggrieved party need not prove the injury. This legal principle gives the movie much of its interest and dramatic propulsion.

The case preparation scenes—including a sequence where the defense attorneys and Lipstadt (Rachel Weisz) travel to the site of the Auschwitz death camp—are surprisingly absorbing. They’re greatly enhanced by the compellingly controlled performance of Tom Wilkinson as Lipstadt’s Barrister and Andrew Scott as her quietly blunt and incisive solicitor.

But Denial has acquired what must be an unintended currency due to its release during this year’s ugly and disruptive presidential election. The parallels are disconcertingly obvious. When Irving tells someone that, to rev up an audience response, he claims that “More women died in the back seat of Edward Kennedy’s car at Chappaquiddick than in the gas chambers at Auschwitz,” or complains that he’s unfairly branded a racist since he’s dated females of color, “and they all had fine breasts,” it’s difficult not to make the connection with Trump’s truth-and-fact ravaging performances.

Denial is a very good introduction to the subject of the Holocaust even though it’s set much later in time. And it’s also an implicit lesson in contemporary provocateur politics and popular confusion and anger.