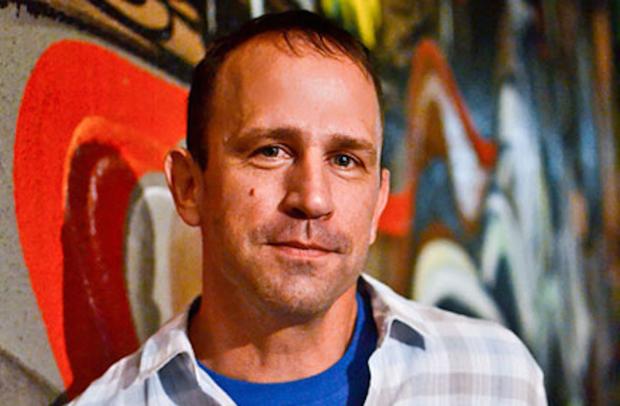 Robert Andrew Powell came to Ciudad Juárez in December 2009, curious about life in this border city at a time of almost unimaginable violence: With drug cartels at war, there were daily kidnappings and executions, bodies of new victims discovered in the street every morning.

But Powell found more than murder in Juárez. He became enamored of the city’s struggling soccer team, the Indios, and fascinated by the players’ courage and resilience and their fans’ fierce loyalty.

Powell’s book, This Love is Not for Cowards: Salvation and Soccer in Ciudad Juárez tells the story of the time he spent with the Indios, befriending and traveling with their cadre of hardcore fans and a number of its players, eating some marvelous food, and trying to make sense of such a place so deadly and yet so passionately alive.

The book’s title comes from a slogan printed on a fan’s t-shirt: ESTE AMOR NO ES PARA COBRADES. It is, Powell writes, “a rallying cry” and ultimately “a statement that clearly speaks to a struggle that has nothing to do with soccer, and to a commitment to more than just a sports team.”

In anticipation of his visit to Buffalo, I spoke with Powell about struggling cities’ love for their teams, sports fanatics, murderous impulses, and his thoughts on Donald Trump’s vision of a big beautiful wall on the US Mexican border.

Though not known as a murder capital like Ciudad Juárez, Buffalo is a city that has had its own challenges and likewise remains fiercely attached to its sports teams, especially the Bills. Why do you think a sometimes troubled city, Juárez or Buffalo, may form such unusually powerful and enduring bonds with its team?  In Juárez, the soccer team gave the city something to focus on besides the violence and killing. The team struggled, but it continued to work hard and fight, just like the citizens of Juárez in general. Sports are an escape of course. But they’re also a chance to witness excellence, or even to admire an honest effort. The Indios failed on the field. But they had the city’s respect. The players always gave an honest effort.

You spent a great deal of time with a group of fans who called themselves El Kartel. What was that like?  Awesome, mostly. Somewhat exhausting. Maybe a little scary, too. These guys are hardcore fans. They liked to party, and they lived and died with the team. They referred to themselves as hooligans in the classic sense, but I rarely found them to be as menacing as they thought of themselves. They mostly like to party, hard.

There’s an astonishing moment in the book when, annoyed by a neighbor who’s dinged your car, it occurs to you that in Juárez, you could kill him and get away with it—a thought you immediately dismiss as “disgusting.” That must have taken you aback. Well, yeah. That’s a healthy way to feel, right? I remain pretty strongly anti-murder. In Juárez, murder is effectively legal. Virtually no killings are ever investigated, much less prosecuted. This obviously is a reason why the murder rate took off when I was there—some ten people a day were being killed. Yet Juárez wasn’t a state of nature. Even though everyone was virtually allowed to kill, only a small portion of the population ever did. I found that oddly life affirming.

Even though the Indios suffer through a dismal season, and every day brings more violence and more murders, your narrative contain moments of joy and camaraderie and resilience and even humor. The book somehow does not strike me as uniformly pessimistic and dark. Am I right about that? I think so. People in Juárez were just trying to live life as normally as they possibly could. They worked, went to school, raised families. They danced at weddings, they cheered on their soccer team. I know that every time I get together with my friends, all we try to do is make each other laugh. People in Juárez are the same, and they act the same. When I lived in Juárez, I laughed a lot. I had a lot of fun, if you can believe it.

What do you miss most about Juárez? I miss the energy of the city, I miss my many friends who still live there. I miss how cheap things cost there, too, to be honest. But I get back as often as I can. I was just there last night, attending the city’s big annual affair.

Living on the Texas-Mexico border, you had a unique perspective on immigration. What do you think of the current political debate here in America on the topic? I’ll say that even if we were to build “a big wall, a beautiful wall” all along the border, people would still get over it somehow. When there’s a will there’s a way. And there continues to be strong incentive for Mexicans to cross. For many reasons.

How are the Indios doing these days? Have you stayed in touch with members of the team? They’re done. The team folded a couple years ago, for financial reasons mostly. Juárez went without soccer until only last summer, when a new team started up, the Bravos. They play in Mexico’s second division. The team’s new owners have deep pockets and ambitions to return Juárez to the top division. I really hope they succeed.

Powell will appear at Resurgence Brewing Company November 4 at 7pm. Longtime sports reporter for the New York Times Jeff Z. Klein, author of Messier, will be the local author for the talk.

Mick Cochrane is director of creative writing at Canisius College and the author of four novels.