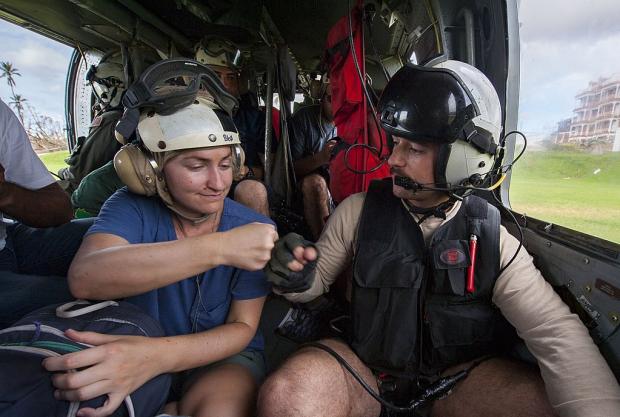 A US serviceman assisting in the evacuation of Dominica in advance of Hurricane Maria on September 24.
by
Richard Lipsitz
/ Oct. 18, 2017 12am EST

Because of torrential rains and horrific winds, major flooding and downed trees destroyed bridges and made roads impassable. 3.4 million human beings are stranded on an island and in dire need of help. 34 persons have died, but that number is expected to rise once support personnel reach more isolated areas.

Puerto Rico’s power grid was completely shut down and it will take months to fix. Electrical power and cellular service are being restored slowly and then only in a few areas.

Only 33 of 68 hospitals are functioning intermittently, and other health-care facilities are often without electricity and are always overwhelmed. Those accepting patients have intermittent power and are not assured of a continuing supply of diesel fuel to run their generators until the next truck arrives.

Over 10,000 containers of supplies, including food, water and medicine, are sitting on the docks in San Juan, unable to reach those in need because of damaged roads, shortage of diesel fuel, lack of drivers. While feeding people is a high priority, meeting this need is far less than certain. Roughly 80% of the agriculture on the island has been destroyed. Flooding and disruption to the sewage system may result in the spread of diseases such as cholera.

President Trump’s inadequate response to the people of Puerto Rico

Typical of President Trump’s disregard to non-white people and espousing his racist disparagement, he condemned the people of Puerto Rico as lazy and wanting free-handouts. He said: “They want everything to be done for them when it should be a community effort.” And then to add insult to injury he calls them a burden on the American taxpayer as if Puerto Ricans are not American citizens deserving all the rights and privileges of citizenship:

“I hate to tell you, Puerto Rico, but you are throwing our budget out of whack. We spent a lot of money on Puerto Rico, and that’s fine. We saved a lot of lives. If you look at the—every death is a horror, but if you look at a real catastrophe like Katrina and you look at the tremendous hundreds and hundreds of people that died and what happened here with a storm that was just totally overbearing. No one has ever seen anything like that. What is your death count…? Sixteen people certified. Sixteen people versus in the thousands. You can be very proud of all of your people and all of our people working together. Sixteen versus literally thousands of people. You can be very proud.”

He passed out bags of rice and tossed paper towel rolls into the crowd. He then considered throwing cans of chicken. He was stopped by the crowd and by his staff, who recognized the possibility of head injuries among those assembled. Then when the president shone one of the flashlights on the supply table in the faces of the crowd, he said: “Flashlights—you don’t need ’em anymore. You don’t need ’em anymore.”

Instead of going to some of the more devastated poor areas, where help is much needed, Trump visited gated communities that suffered very little damage during the category 5 hurricane that hit Puerto Rico.

While Wall Street financiers persist on imposing their austerity program on the people of Puerto Rico—a condition for which speculators and hedge fund managers had entangled Puerto Rico in a $74 billion debt—unions have voluntarily stepped forward in solidarity with their brothers and sisters.

One of the most underreported stories arising from the devastation of Puerto Rico by Hurricane Maria is the volunteer effort of the labor movement. Teamsters Joint Council 16 and the International Brotherhood of Teamsters in Washington have sent hundreds of truck drivers to the island to help distribute a stockpile of relief supplies. The National AFL-CIO is coordinating donations for the Union Community Fund for families in Puerto Rico and the American Virgin Islands. The New York City Police Department and New York City Fire Department unions and the New York City Construction Trades, Transport, and Maritime Workers, and New York State Nurses Association have all sent teams of volunteers to the islands. We are working as a united force to help our brothers and sisters in distress on the islands. This is in direct contrast to Donald Trump and his Wall Street allies.

At the national convention for the Transport Workers Union, representatives from around the country stepped forward to pledge financial support. TWU collected roughly $125,000 in pledges from 40 locals in less than an hour. Local 234, representing bus and subway workers in Philadelphia, pledged $5,000. Local 568, representing airlines workers in Miami, pledged $10,000. And Local 100, comprised of bus and subway workers in the city and Westchester, pledged more than $20,000. Delegates representing workers from across the country made their way up to a box placed at the stage—into which they gave individual donations totaling another $9,000. Mick Cash, General Secretary of the English National Union of Rail, Maritime and Transport Workers, also donated $5000 to the TWU relief fund. “We may be separated by an ocean but we’re not divided by it,” Cash said.

To make a donation and support in relief and recovery efforts, please visit:  https://aflcio.org

Richard Lipsitz is president of the WNYALF.