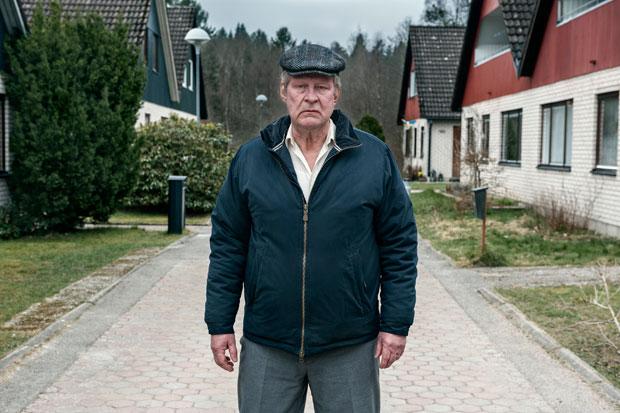 After the huge international success last year of the Swedish comedy The 100-Year-Old Man Who Climbed Out the Window and Disappeared, you’d be forgiven for suspecting the Swedes of mining similar territory with this film about another testy old curmudgeon. But this entry for the Oscar’s Best Foreign Language Film category turns out to be quite a different jar of herring.

Ove (Rolf Lassgård) is well short of centenarian status: At 59, he’s comparatively a spring chicken. But he’s grumpy beyond his years, spending his days monitoring his neighbors in the housing development where he lives. You might wonder why they put up with the old grouch, but be patient, all will be revealed.

Turns out that Ove is a widower who can’t move past the death of his beloved wife. And when he is forced into early retirement from his job as a train engineer, a job he has held since he was a teenager, it seems to him that enforcing parking regulations isn’t enough of a reason to live. He puts on his best suit and prepares to hang himself.

But something comes up. Ove keeps trying to kill himself through most of the film, and circumstances keep getting in the way. At first it’s the arrival of his new neighbors and their children, who are unable to back their vehicle into the designated space, just the kind of failing that Ove is duty-bound to correct. When people aren’t ringing his doorbell, he stumbles into other tasks that have to be done before he can shuffle of the mortal coil and join his wife.

If attempted suicide doesn’t strike you as funny, don’t worry, that’s not where A Man Called Ove goes for laughs. It’s tone is more sentimental than comical, as he remembers his past, scenes from which take up the bulk of the movie: his relationship with his father, who also worked at the train yard, and how he met his wife.

Need I say that none of Ove’s attempts at self-termination come to fruition? Of course not—this clearly isn’t that kind of movie. Nothing here fails to go just where you expect it to, other than it proceeds on its way with more depth of emotion that you were probably expecting. If it has a flaw, it’s that the final reel lays it on a bit thick, with enough emotional climaxes for a half-dozen tearjerkers. Your handkerchief will get a good workout at this one. Opening Friday at the Dipson Eastern Hills Mall Cinema.