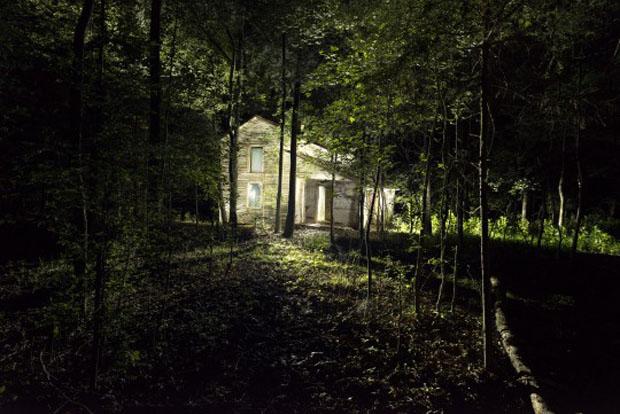 The House has Gone Down…

He calls it “painting with light.” Not a novel description of the art of photography. But for Michael Bosworth, his work on show at the Burchfield Penney Art Center, with novel reference to an unusual amalgam of photography plus video techniques, and strange but beautiful end product.

The title of the show is The House has Gone Down, and the Lamps are Out. A quote or near quote from the classic text and images treatise on Alabama sharecroppers during the Depression by James Agee, writer, and Walker Evans, photographer, entitled, ironically, Let Us Now Praise Famous Men. The Bosworth installation makes constant allusion to the Agee and Evans volume, and partakes of some of the positive characteristics and negatives of that work.

Positive characteristics mainly related to the stark beauty of the visuals—though of very different sorts—in both cases. Negatives related to verbal excesses in which Agee indulges, as in his pleonasms of apology for undertaking a writing project for which he claims to lack the requisite literary ability, but then goes on to dazzle with his poetic prose descriptions, which can become excessive in their own right. And lack of qualification in other ways as well, such as to geographical and general cultural background.

Bosworth’s verbal excesses occur in terms of an overabundance of text expository material—in wall copy in the gallery, and further material on the gallery website—and related possible message overload. The installation messages range from sense of fear and dread almost in the abstract, to slavery and its aftermath as fatal flaw of the American enterprise, to Hollywood horror movies, to something maybe about Trump and his base.

Differences from Evans have to do with the way Evans’s photos declare and proclaim: no illusions. What you see is what is. The way it is. These dirt poor people, these unpainted shack dwellings. Whereas Bosworth’s photos and video are all about illusions. About how Hollywood movies—in terms of topics and in terms of techniques—invoke fear and dread. The herky-jerky, protagonist-point-of-view approach in the middle of the night toward the abandoned shack in the woods. Unless Freddy Kruger is lurking there. Which of course he is.

The shack house in the woods that features in Bosworth’s work is an overseer’s cabin remnant of a North Carolina slave-era plantation. The surrounding woods grew up subsequent to the economic failure of the plantation sometime early twentieth century.

In the expository material, Bosworth tells how he constructed the video “as a stop-animation from thousands of still images. I shot the images in the darkened forest at night, using a flashlight to paint with light. Exposures were twenty seconds long, allowing me to paint in sections of the house for each image.” The results were then processed and edited into a sequence of still photos video.

The final result “flickering house in the woods” imagery is intended to invoke “the crafted atmosphere of Hollywood horror films” as well as “true tales of spook light sightings,” he says.

The exhibit is in the gallery Project Space, appropriately darkened and populated with sapling pole trees hung with clumps and bundles of Spanish moss, in one case vaguely reminiscent of a human form, like a lynching victim. Toneless staccato sound effects mimic horror film suspense soundtracks, but when I visited the installation, shortly after the Las Vegas tragedy, I was mostly reminded of the muted machine gun fire background noise to the concert crowd in chaos footage.

A Bosworth personal history story amid the expository material helps explain the fear and dread thematic in the present work and some of his previous work. (The little townscapes under water, with glancing reference to climate change related environmental disaster events, starting with Katrina, but now including Harvey, Irma, and Maria. The obsession with the Salton Sea—another environmental disaster—ghost structures.) He relates that a grandmother who lived in England through the First World War years before immigrating here, “was very cautious, and warned us of many things when I was growing up…” Nothing specific, he says, “but a sense of dread” haunted her, and to some degree, apparently, was communicated to him as well. “Even into my adulthood,” he says, “there were two things I had to promise: never to purchase a German car, and to avoid the mountains of West Virginia.”

The Bosworth installation continues through October 29.