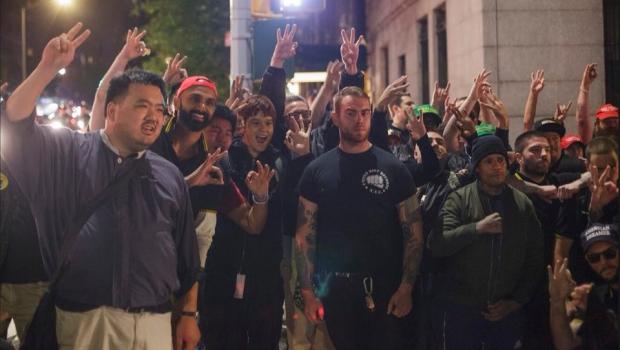 New York’s Republican Party has endorsed misogyny and white nationalism—or, at minimum, declared them to be scourges less worrisome than vandalism. And so the genteel tradition of the New York GOP is apparently no more; its Trumpification is complete.

On Friday, in a turn of events that would have seemed remarkable just a few years ago, the Metropolitan Republican Club—of which New York City Mayors Fiorello LaGuardia and Mike Bloomberg and governors Nelson Rockefeller and George Pataki were members—hosted Gavin McInnes, founder of the Proud Boys, a self-described “Western chauvinist” collective identified as a hate group by the Southern Poverty Law Center. The group’s members have helped to organize and participated in white nationalist demonstrations such as the “Unite the Right” rally in Charlottesville, Virginia. McInnes also has attracted controversy for statements such as “Muslims are stupid,” and “Maybe the reason I’m sexist is because women are dumb.”

Not a single Republican—not state party Chairman Ed Cox, not US Senate nominee Chele Chiavacci Farley, not gubernatorial nominee Marc Molinaro or state Senate Majority Leader John Flanagan—spoke up to criticize the invitation. Instead, they criticized Governor Andrew Cuomo for the response from anti-fascist activists.

On Thursday night, someone smashed windows and spray painted anarchist symbols and vaguely threatening messages at the club’s Upper East Side townhouse. Molinaro swiftly demanded that Cuomo exercise his great influence with anarchist vandals: “Last night one of our state headquarter buildings was attacked by radical leftists,” Molinaro said on Friday. “I call on New York Governor Andrew Cuomo to condemn this attack immediately and call for calm on the political left.”

The idea that Cuomo is associated via “the political left” with the unknown vandal—and that such people would heed Cuomo’s call for calm—is very confused. In a note left at the scene, the hooligan called Democrats the “spineless partners in crime” of Republicans. Anyway, anarchists generally don’t follow instructions from elected officials—that’s why they’re called anarchists.

The Metropolitan Republican Club, however, is a Republican organization whose building Molinaro identified as one of his campaign headquarters. “This is an act of political violence done by cowards in the middle of the night,” said state Republican Chairman Ed Cox on Friday, while mentioning nothing about the propriety of a Republican club hosting an openly racist, sexist provocateur.

When violence broke out between McInnes supporters and anti-fascist protesters on Friday evening, the NYPD arrested three of the protesters but none of the Proud Boys who were documented beating a man and shouting homophobic slurs at him. In response, Cox took a stand for civility and decency by placing blame where it clearly lies: on … Cuomo. “The governor does not condemn it, the governor does not say anything,” Cox said, regarding the vandalism. “But then when there is later violence, he then says that it’s all Donald Trump’s fault. What kind of governor is that?”

So, to recap: A Republican club in the most diverse city in the United States invited a bigoted speaker who runs a hate group that has been involved in violent incidents across the country, his supporters clashed with protesters—who may not even be Democrats—and the state Republican Party’s only reaction is that the Democratic governor is to blame.

Cox’s premise that left-wing protesters would have avoided any confrontation with the Proud Boys if Cuomo had condemned the vandalism may seem ridiculous, but Metropolitan Republican Club President Deborah Coughlin agreed with her chairman. “We’re the victims here,” she said. An affluent white woman who holds a leadership position in the party that controls all three branches of the federal government claiming that she and her cohort are victims because their aggressive bigotry incites protest—perhaps no sentiment better encapsulates Trumpism.

One is tempted to ridicule GOP leaders for the stupidity of their assertion that Cuomo somehow controls militant radicals, but that would be too kind, as it would assume Republicans actually believe the nonsense they spout. That’s unlikely. Ed Cox is not a simple man, his imitation of one notwithstanding. Educated at Princeton and Harvard, married to former President Richard Nixon’s daughter, and the scion of four families so prominent they each have their own Wikipedia page—Cox’s background is patrician enough to make Mitt Romney look like Carl Paladino. In 2008, Cox served as New York state campaign chairman for John McCain, the famously honorable late senator who refused to fully indulge his party’s Islamophobic and xenophobic instincts. But now that the state party has been Trumpified, Cox falls in line.

Cuomo did, indeed, observe that the GOP reaped what it sowed by inviting a speaker who aggressively insults most New Yorkers on the basis of their religion, race and gender. “Once you unleash hate and division and you demonize differences, you lose control of it,” Cuomo said.

Why this so offends Cox is unclear. But what apparently doesn’t offend him at all is McInnes, the Proud Boys and a Republican club’s choice to host them. Cox and Coughlin did not respond to interview requests from City & State.

The embrace of confrontational bigotry is a major shift for a state party that was, until recently, one of the last outposts of Republican moderation. This is the party that Mike Bloomberg felt comfortable joining to run for mayor. In May, at the state convention, the Republicans anointed Molinaro their nominee for governor and Keith Wofford, an African-American former Obama supporter, their candidate for attorney general. The Proud Boys incident helps illustrate why the state GOP may have felt the need to select such fresh-faced, soft-spoken candidates, rather than allowing their party’s voters to choose nominees through primaries: Increasingly, when left to their own devices, New York’s Republican voters choose angry, divisive white men in the Trumpian mold. And Cox’s comments show that the inmates are now in control of the asylum. Even the party’s local elite are following their base’s lead and turning into Trump Republicans.

Of course, the Trumpist attitude has long been a strain of New York conservatism, exemplified by New York-bred pundits such as Bill O’Reilly and Sean Hannity. But the Upper East Side, home of the “Silk Stocking District,” was always a redoubt of restrained, tolerant Republicanism.

This seemingly ephemeral fracas over a marginal figure such as McInnes is actually a watershed moment. One day, political observers may look back at it as the time when the New York GOP shed its last vestiges of moderation.

On Monday, Molinaro came out against the Proud Boys. He told NY1 he wouldn’t have invited the group and added, “I wasn’t aware of them, I don’t know them nor do I tolerate that kind of behavior or language.”

In a subsequent interview with City & State, Molinaro called for comity, blaming both sides of the aisle for its current absence in the political debate. “We’ve had leaders suggesting it’s no longer acceptable to be civil,” he said. “That’s a rhetoric that’s encouraging bad behavior and we all need to try to avoid it. As New Yorkers and leaders, we have to find a way to tone down that rhetoric and not lashing out in the most violent and horrible ways.”

Molinaro said he was unaware when the graffiti first surfaced that it had anything to do with the upcoming McInnes event and he distanced himself from the same Republican club that he was eager identify with his campaign last week. When asked what it said about the GOP that the club hosted a speech by McInnes, Molinaro said, “It says something about those individuals who made the invitation. No one I’m aware of knew about the invitation.”

Molinaro seemed sincere in his aversion to violent or derogatory rhetoric, which he himself avoids. Nonetheless, he is the head of the Republican ticket and these are some of his supporters. As City & State recently reported, that tension is going to make it very hard for Molinaro—despite his presentation as a mild-mannered conciliator—to persuade New York’s diverse and liberal-leaning electorate that it’s okay to vote GOP.

In fact, the party will likely continue to find itself shut out of any statewide office unless it repudiates the bigotry in its ranks.