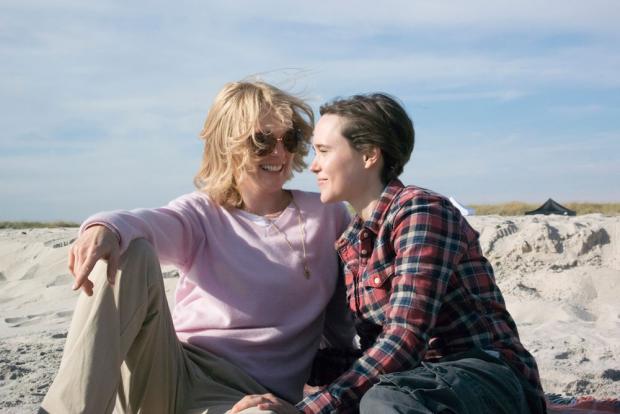 It may seem that the people of the world grow further apart every day, clashing over issues of religion, ethnicity, sexuality, economics, politics, and whatever else you can think of to argue about. At the risk of sounding Pollyannish, I like to think that much of this strife is actually proof that many differences are disappearing, or at least the notion that any of these issues are barriers to sharing the planet. The protestors may be louder, but only because they’re losing the argument.

And I think movies have contributed greatly to this. There’s nothing like a good story about people who are in some way different from the ones you see every day to make you realize, consciously or not, that they are more like you than unlike you. Three examples of this are on local screens this week.

Freeheld is based on the true story of Laurel Hester, a veteran New Jersey police detective who for most of her career tried to hide the fact that she was a lesbian from her co-workers. Even when she found a steady girlfriend, Stacie, with whom she bought a house, she never told her police partner.

When she was diagnosed with late-stage lung cancer in 2005, Laurel expected that New Jersey’s recently passed domestic partnership laws would ensure that Stacie would be able to keep the house they had shared and be entitled to her pension benefits. But the county where she worked used a loophole to deny those benefits. With the remainder of her life measured in weeks, she has to find a way to convince her local freeholders (that’s what they call county legislators in Jersey) to change their minds, becoming as public at the end of her life as he was private for most of it.

Adapted from a documentary short, Freeheld has been in development for move than six years, which is to say well before the time that marriage became a guaranteed right for all Americans regardless of sexual orientation. Of course a Supreme Court does nothing to settle the issue on the minds of many people for whom marriage is reserved for one man and one woman. Will a film like this change their minds? It might if they were to see it. More likely it will help give a push to the more open minded who are already on the way past thinking of gays as abominations in the eye of this or that deity.

It would be a stretch to call Freeheld a great movie. The direction by Peter Sollett is at best adequate, and many of the supporting characters will strike harsher critics as being underwritten. But you’d have to have a heart of stone not to be moved by the story here, just as you’d have to have a mind cemented shut to deny the issues of fairness under the law that are explored. Moore and Ellen Page make for an appealingly odd couple—they’re different in just about every conceivable way. Steve Carrell is probably a lock for an Oscar nomination in the film’s most crowd-pleasing role as an in-your-face gay activist who rallies support for Laurel and Stacie, but there’s also good work from Michael Shannon as Laurel’s partner and Josh Charles as the one freeholder on their side.

The documentary Meet the Patels explores a culture largely unknown to many Americans by centering on one of the aspects of it that seems most foreign to us: the tradition of arranged marriages for people form the Indian subcontinent. Ravi Patel is a young actor who has enjoyed a bit of success in Hollywood. He is approaching 30 and is not married, which upsets his parents, whose own marriage was arranged in India before they emigrated to the US. They’d be even more upset if they knew that for two years their son had been seeing Audrey, a red-headed American girl from Connecticut. Ravi loves her but feels that he needs to be with someone who shares his heritage. So he breaks up with her and allows his parents to start finding him a wife, which they promise to do within one year.

Ravi spends the year filming this quest with the help of his sister Geeta, also unmarried. Along the way we learn a lot about both why the tradition of arranged marriage endures, how it operates in 21st century (yes, the internet is used), and about the traditions that Ravi clings to even though he’s as American as can be. It’s a warm-hearted and very entertaining film.

Those last two adjectives apply to no part of The Tribe, one of the most acclaimed movies to play the film festival circuit in recent years but one which no major distributor was willing to take on. The setting is a boarding school for deaf-mute teenagers, and if anyone in the cast is able to speak, they don’t do so in the film. Communication is all through sign language, which is not translated in subtitles or any other way. Even if you read sign language, you’re unlike to follow much of it here; they use a Ukrainian variant (that’s where it takes place, though you might never know that if I hadn’t told you), and because everything is shot in long, unbroken takes from a middle distance, the characters’ signing is seldom adequately visible.

Unlike the other two films, The Tribe is not out to seek understanding or sympathy for its characters, though you may get a sense of how it might be to live among them: as the cliché goes, the silence is deafening. The main character a new boy who finds that he must join a criminal group to ensure his own safety. The violence in the film is plentiful, and while the experience of watching it is mitigated by both the silence and the lack of editing or close-ups, those same factors help make it disturbing as well. Director Miroslav Slaboshpitsky never cuts away from a scene until he has exhausted it, and some of them are quite exhausting indeed. As a debuting filmmaker, he has succeeded in being audaciously willful: by taking away a large part of what we respond to in a film—the aural elements—he makes it difficult for us to watch, but if you make the effort it becomes equally difficult to look away from.

A final note: If you’re heard of the film and were waiting to watch it at home, don’t bother—the film’s middle-distance presentation and the need to focus hard on the actors demands that this be seen on a big screen or not at all. It will have one local screening next week, as part of the exemplary Kaleidotropes film series, next Wednesday, October 21 at Squeaky Wheel.