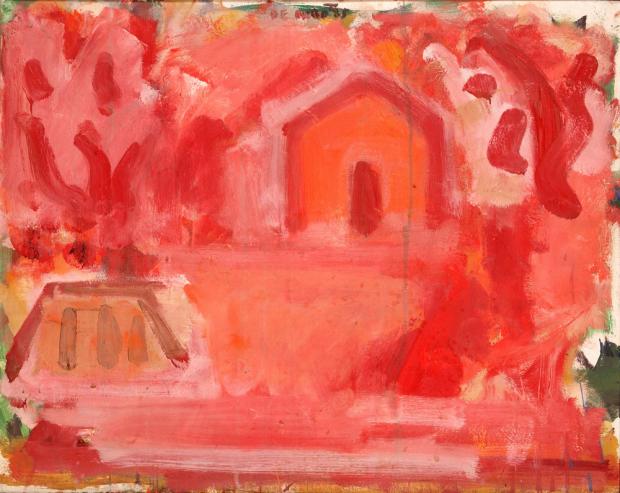 The trunkfuls of money Nelson Rockefeller sent along to UB when in the 1960s he took over the previously private institution for the flagship of his shiny new state university system enabled hiring poets. One of the poets they hired was Irving Feldman, and he got them to also hire his painter friend Robert De Niro, Sr., who taught several summers at UB, and painted some Buffalo landscapes. A two-artist exhibit of paintings by De Niro—including some of the Buffalo landscapes—and poems by Feldman is currently on view at the UB Anderson Gallery. Actually a three-artist exhibit. In another part of the gallery are industrial Buffalo paintings by Barbara Insalaco, then a student of De Niro at the UB art school, and lifelong friend. And friend also of Feldman, now a UB emeritus professor, who selected his own poems for the exhibit. De Niro, the father of movie actor Robert De Niro, Jr., died in 1993.

The paintings are in a gestural smudgy representational style and include in addition to the landscapes a number of still-lifes and paintings with human figures. What you might call portraits except that the artist didn’t bother too much about facial features. And in general with a huge debt to—reference to—homage to—the art of Matisse. In the still-lifes, several table arrangements of flowers and vases. And the human figure works, particularly a large oil painting called Three Women—from 1968, one of the years De Niro taught in Buffalo—reminiscent of a number of Matisse paintings of women in harem costumes and languorous poses. Also particularly—as to composition, as to mood of calm sensuality—of the Albright-Knox great Matisse oil on canvas La Musique. De Niro must have been thinking of that work as he worked on Three Women. Other reminiscence of various Matisse seated portraits—of Mme. Matisse and others—as well as patent Buffalo reference in DeNiro’s vivid portrait of Seneca Chief Red Jacket. So he visited the Historical Society as well as the Albright-Knox.

The landscapes are not traditional landscape but more in the way of architectural portraits of residential structures, with possible landscape terrain as foreground not background, the residential structure in the background. But again, De Niro is not fastidious about detail. So hard to make out particulars about the architecture, and harder to make out just what constitutes the landscape foreground. Lawn? Streetscape? Chaos area?

In addition to wall copy display of a half dozen or so of Feldman’s poems, a special display features works of other UB poets of the early days and beyond, several of them legendary as teachers as well as writers. The likes of Charles Olson, John Logan, Mac Hammond, Bill Sylvester, Robert Creeley, and Carl Dennis. One of the wall copy Feldman poems is an elegy written upon learning of the death of Charles Olson. Quoting in part:

you plunge to the primitive deep

its Follies and Vices, cannot reach,

and swim among their lost originals…

Echoes of Swift’s epitaph. De Niro, incidentally, also wrote poems. On one wall, a dozen or so lithograph pages of handwritten poems and graphic art surround, precisely in the manner of William Blake, his poems and illustrations, or illuminations.

Insalaco’s paintings include dramatic mid-river perspective views of the Ohio Street Bridge and adjacent elevators—what’s more recently been designated Silo City—and one of the Michigan Street Bridge and industrial surrounds. Conveying the grit and grandeur of the area industrial past and cultural resource redivivus present.

These exhibits continue through October 24.