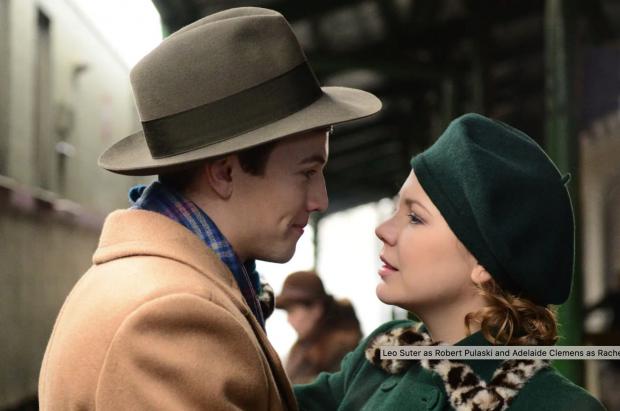 If there is a through line to the career of director Martha Coolidge (Rambling Rose, Real Genius, Valley Girl), it is her consistent ability to make films that are better than they had any right to be given scripts that were not of the top tier. One of numerous independent directors of the 1980s who moved to television and cable in the 1990s when the tide turned away from low-key comedy-dramas, Coolidge is back with I’ll Find You, her first feature in over a decade. Once again, her work, in collaboration with exemplary technical contributions, is in service of a second rate script.

Filmed on location in Poland, I’ll Find You is a love story between two musical prodigies who first meet in the mid 1930s. Rachel (Ursula Parker) is a talented young violinist whose abilities set her apart from her classmates. She does not immediately get along with new student Robert (Sebastian Croft), who also aspires to be a violinist. Intimidated by Rachel’s superior skills, Robert sulks until he finds that his real talent is in singing. He also comes to realize that his initial antipathy to Rachel masks stronger feelings, in spite of their different religions—she is Jewish, he is Catholic.

After some years apart, Robert (played as an adult by Leo Suter) returns hoping to resume his relationship with Rachel (Adelaide Clemens). He is disappointed to find that she has been engaged to David, the scion of a wealthy manufacturing family, who expects her to give up her dreams of becoming a professional musician in order to tend his house and bear his children.

As if there weren’t enough impediments to the course of true love, it is the summer of 1939, and Adolph Hitler is about to make good his threats to invade Poland.

The film’s original title was Music, War and Love, which bluntly spells out the three themes of the story. Rachel and her family are taken to Auschwitz, and Robert separates from his own family in order to remain in Poland and find a way to free the love of his life.

And that’s where the story grinds to a halt. To state the obvious, romance and concentration camps are not a natural fit. Having made the decision to go down that route, the script then does all it can to avoid the potential pitfalls. The film concludes with a post-war third act that contrives a flimsy impediment to the course of true love, only to brush it away to rush to the expected happy ending.

The unsatisfying sloppiness of the story is all the more surprising given that co-scripting credit is given to Hollywood veteran David S. Ward, known for The Sting and Sleepless in Seattle. If he was brought in to fix up an unsatisfactory early draft, his work was insufficient. He would have done far better to excise the scenes set during the war in order to build up the ones set after it: some stories are better when you only hear about them.

What makes the denouement of I’ll Find You especially disappointing is that so much of the movie is first-rate stuff. The production seems to have had a substantial budget, and makes excellent use of Polish locations (primarily in Lódz and Kraków). The photography and lighting make it a pleasure to look at, just as the score of original and classical music sweeps the viewer into the story. (Many of the behind-the-scenes contributors are Hollywood veterans of Polish origin, six of them Oscar winners or nominees.) Suter, who does much of his own singing, and Clemens make a pleasing pair of young lovers, and are surrounded by a cast filled with Polish stars and such internationally familiar faces as Stellan Skarsgård, Stephen Dorff and Connie Nielsen.

Maybe the biggest disappointment about I’ll Find You comes from the fact that this is the kind of theatrical movie that doesn’t seem to get made anymore. Viewers who are tired of superheroes and crude comedies should see it if it comes to a theater near you; just go in prepared to enjoy its virtues while regretting its flaws.