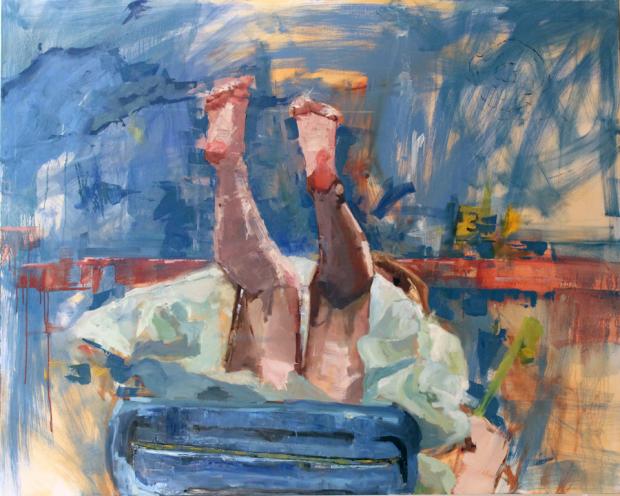 If you can talk about it, why paint it? —Francis Bacon

A dozen or so wonderful paintings—gorgeous paintings—in the Sara M. Zak show currently at the Castellani Art Museum at Niagara University.

Paintings about many things at once. Time, repetitions, morphing into infinite, into eternal. Play, innocence, terror disaster, life, death. In a mix of disparate images—of children, a recurring image of one little girl at play, on a swing, on a beach, in surf waves, a child on a carousel—and ominous mechanical devices of unknown purpose and function—like something out of Hieronymous Bosch—and even more remote and inscrutable, technical data representations, evoking the atomic world, evoking the cosmos. Blurred and fragmented—like a movie running too fast for us, for our finite capacity mechanism of perception, or like a dream or memory we try to recapture but can’t quite—and juxtaposed and overlaid. Sometimes broaching transparent, sometimes opaque. In bright and subdued colors

One of the paintings is titled Limits of the diaphane, a quotation from James Joyce’s Ulysses, wherein he invented a prose style somewhat like the pictorial style of the paintings. Fragmented, elliptical, dense, disjointed, sometimes hard to decipher. Called stream of consciousness. Akin to the disjointed way we think and perceive, versus raditional logical prose narrative. The phrase “limits of the diaphane” is difficult to pin down precisely. Limits of visibility, it seems to mean, in terms of transparency, disappearance. Limits of perception. And conception. Regarding the concept we try to get a grip on but can’t quite. Limits of understanding how one thing relates to something else, or everything else (though it does). The phrase in Ulysses occurs in a densely written scene on a beach. A stream of consciousness meditation on the here and now and recurrence and time and eternity.

The painting depicts a blurry children’s Ring around the Rosie—a play activity thought to be in reference to the occurrence of the plague in England—in what could be a Byzantine style church—with celestial evocation translucent or brilliantly reflective golden dome ceiling and Romanesque arches and windows—but is actually a mausoleum, I was told. A kind of impromptu danse macabre—about time and what it portends—by performers themselves still inhabiting a time of innocence, time of ignorance of time and what it portends.

In an artist’s discourse at the opening, Zak talked about some of what the paintings were about. Somehow about some recent mass tragedies, she said. She mentioned Paris and Belgium. About the children all of a sudden become orphans when their parents were killed. But I think even more—at an even deeper level—about Sandy Hook. About the parents all of a sudden become childless. You can talk—barely—about Paris and Belgium. You can’t talk about Sandy Hook. You can only paint it.

In an artist’s statement in a brochure accompanying the exhibit, Zak says, “We swing, we ride the carousel, we let the waves lap over us and over us…our lives are accumulated repetitions with slight variations…except when they are not…” Through mass disasters, mass tragedies, she means.

Other talk in the artist’s statement and the show opening discourse about her technique (“I scrape, I repaint,” she says) and remarkable brushwork (she describes it as “frenetic and searching”) and nods to Joseph Heller (Catch 22) and Sigmund Freud (“the uncanny” and “cognitive dissonance”). Interesting, but unnecessary talk, perhaps. Because the paintings speak so well. They are eloquent.

The show is called An Overwhelming Familiarity. It continues through January 11.