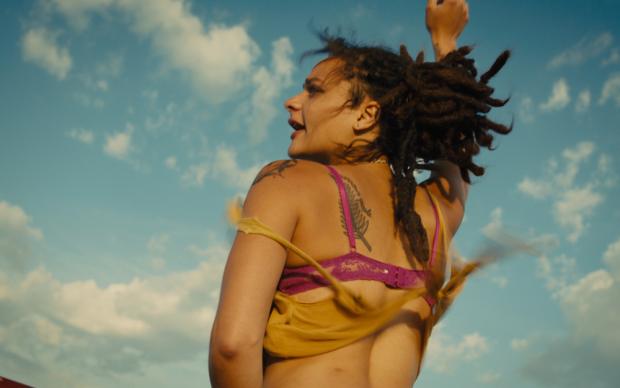 Winner of the jury prize at this year’s Cannes Film Festival, American Honey is a sprawling, overlong, perverse mess. And I mean that in the nicest possible way.

You wouldn’t know it from the credits, which in Dogma fashion refers to it as “A film made by” the people seen onscreen and gives only an alphabetized list of the people involved, but American Honey was written and directed by Andrea Arnold, the British filmmaker best known for Fish Tank and a 2011 adaptation of Wuthering Heights. Like so many Brits, she is fascinated by the huge expanses of country between America’s coasts, and spent a few years driving around exploring them and the people who populate them.

At one point she encountered a “mag crew,” a gang of young people who travel around selling magazine subscriptions for less than reputable organizations. This kind of thing was the subject of a 1987 Senate investigation into the slave-like working conditions the kids were subjected to.

Assembling a group of mostly amateur actors, Arnold devised a story around an ungrounded Oklahoma girl named Star who joins one of these crews. Played by a mixed race college student named Sasha Lane, Star is first seen dumpster diving with two young children. Her circumstances aren’t clear—is the man she lives with her father? stepfather?—but they’re clearly bad. And when she catches the eye of Jake (Shia LaBeouf) and his gang when they stop at a local K Mart, she’s gone without a look back. When you’re living hard in Muskogee, it must be hard to resist a come-on like  “We explore America, we party, a whole buncha shit, it’s cool.”

Under the direction of Krystal (Riley Keough), a girl barely older than the rest of them, this crew travels from city to city, selling magazine subscriptions door to door. If this sounds archaic, it’s because they’re not so much selling periodicals as they are their own hard luck stories. And it’s less a job than it is a way for them to have something to do with their lives, at least until something better comes along.

There isn’t all that much plot to movie; it runs 163 minutes, and could easily have been half that length, or twice it. That as much of it is connected by a sort of romance between Star and Jake is not to its credit: the film’s biggest flaw is that it concentrates so much time on them when we could be spending more time with their dozen or so fellow travellers, whose stories are probably equally interesting.

American Honey hovers between realism and fantasy. You’ll probably want to know that nothing awful happens here, which you might expect in this kind of story. There are some scenes where Star certainly seems headed for serious trouble. But Arnold is interested in watching this young woman’s development, not in punishing her for chances taken. Is it a good movie? It’s a fascinating one, and that’s close enough.