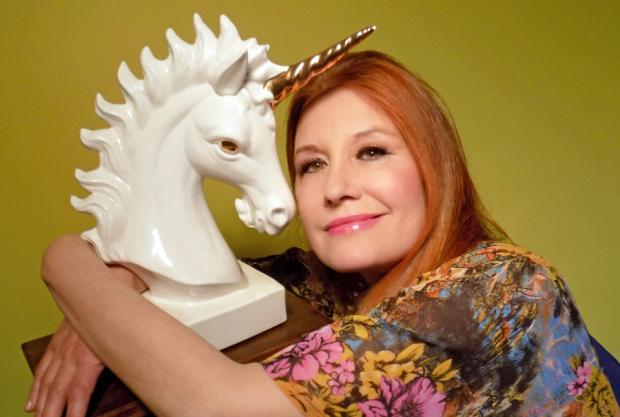 Unicorns are cool, right? We’re fascinated with them, and yet they don’t really exist. Perhaps that’s a large part of why we’re so fascinated. In the Middle Ages, these wild woodland creatures were considered a symbol of purity and grace. Supposedly, they could only be captured by a virgin, and healing fluid was said to come from their protrusive horns. Purity, indeed.

Performance artist Karen Finley shares our cultural preoccupation with unicorns, and she uses them as the framework for some of the ideas in her latest show, Unicorn Gratitude Mystery, which she’ll perform at Hallwalls Contemporary Arts Center on Friday and Saturday, October 14 and 15. Seen through Finley’s probing lens, the 2016 presidential election cycle is nothing if not surreal, and the dynamics at play are warped. Our unicorn fixation—which extends far beyond the election—just sets the stage for a show that will challenge your thinking about the candidates. Guaranteed, you’ll never see them quite the same way again.

“I’ve always had an interest in unicorns, but beyond the creature itself, I’m curious about why we’re so focused on that image,” she said over the phone from her home in Westchester County. “There are so many ways of looking at it, but I think first and foremost it’s about white power—we have this white creature, fenced in and alone…it’s an unattainable ideal, and we’re fascinated with it. Especially with regard to Black Lives Matter, the obsession with the unicorn and its whiteness speaks to a cultural censorship of black and brown skin.”

Finley is no stranger to the cruelty of censorship. After having a pair of grants from the National Endowment for the Arts rescinded in 1990 due to the perceived obscenity of her work, she took her case all the way to the US Supreme Court. The outcome, eight years later, was less than victorious. But what’s clear in hindsight is that her naysayers missed the point: Finley’s performances might not be for the faint of heart, but by symbolically reenacting the trauma of degradation, she gives voice (and valuable catharsis) to victims everywhere. Like her most fervent critics, she is horrified by pornography and sexual assault, but her approach to healing is hands-on. By publicly recreating what originally happened in private, she creates a shared experience, shifting power away from the perpetrator.

And if anything, her battle with censorship raised her profile as a respected, working artist. In its wake, she’s stayed busy, continuously performing and publishing for more than 25 years now. It’s a milestone commemorated by the 25th anniversary edition of her Shock Treatment compilation, re-released in expanded form by City Lights last year. Along the way, AIDS has been a recurring topic in her work, thus cementing her already longstanding liaison with the LGBT community. It set the foundation for her early 1990s piece (and subsequent CD release on Ryko), A Certain Level of Denial, and a one-time Hallwalls installation entitled Written in Sand, which she’s more recently refashioned into a compilation of AIDS-related writing.

Amid the dead serious subjects, Finley can also be laugh-out-loud hilarious. Sometimes it’s a tool she uses to temper the discussion of hot-button topics, while other times (as is the case of her A. A. Milne parody, Pooh Unplugged) it’s a device to keep people amused while she suggests the outrageous and unthinkable. In Unicorn Gratitude Mystery, it’s a bit of both.

“Unicorns are also a feminine symbol for young girls, and they’re used in My Little Pony,” she continued. “There’s a sexual energy there with this twisted horse that has little rainbows and glitter around it and a not-so-little dick coming out of its head. It represents magical thinking and an imagined utopia—it doesn’t exist, but people attach themselves to it and project meaning onto it. On the surface it’s so clean and pure, but beneath that exterior, I see racism and white privilege.”

She goes on to establish multiple connections that, despite their far-flung nature, make perfect sense as she explains them in a compelling stream of consciousness: The whiteness of the utopian ideal extends to forced pleasantries and restrained hostility in the aisles of Whole Foods, at the farmer’s market, and on the yoga mat. (Think about it the next time a stranger barks “You’re fine,” when you apologize for reaching into their space.) It extends to Vermont, a predominantly white state known for its white dairy products. Vermont is also the political home plate of Bernie Sanders, who Finley says is a unicorn unto himself, perpetuating the myth that one (white) man can instill so much change, so much magic and enchantment. And, tied into that, the term ‘unicorn’ now also refers to tech startup ventures valued over $1 billion—more fantastical thinking, more white privilege.

The “mystery” in Finley’s new performance has some interesting gender contexts. In costumes designed by Violet Overn, her 22-year-old daughter from her second marriage, she apes Trump and Clinton in eye-opening ways that go well beyond the scope of the daily nonsense playing out in your social media feed. Her portrayal of the Donald is downright androgynous.

“There’s a trans element to Trump,” she said. “And he surrounds himself with these overdone women—it’s almost a drag aesthetic. His masculinity goes so far around the circle, there’s a queerness to it, but there’s also a negativity in his projection—a self-hatred. It’s frightening having to watch someone working so hard to cover up so much. From an artist’s perspective, that’s fascinating. But stepping away from that, his mania and the uninhibited lies he tells to cover for his craziness makes it clear that he’s very dangerous.”

Finley says without hesitation that she’ll be voting for Clinton, but that doesn’t mean she suffers any illusions about her candidate: Enter the “gratitude” portion of the mystery. She sees our modern notion of gratitude as a falsehood, which is rooted in the feminist idea that women are constantly made to apologize for themselves, their lives—their need to take up space—while also being expected to remain gracious about it all. In her seemingly unflappable stance, Finley says Clinton is a clear manifestation of this unfortunate dichotomy, and it pre-dates her current run for office.

“I wrote the gratitude segment before I cast Hillary in it,” she said. “There’s nothing she can do right, and she always assumes an apologetic position because she grew up in the ’50s, when that’s how you learned to exist as a woman. Now she’s trying to find her power within the ‘lack of.’ Hillary is very intelligent and has accomplished a lot over the years, but the psychodynamics of the presidential race present another story. It’s going to be a shared space in the Oval Office with her husband. This is a house they once lived in together, and it’s also the site of a great trauma and humiliation in her life. The fact that she’s willingly and eagerly placing herself in the space of that trauma—on that phone, in that office—is very kinky. Most people I know wouldn’t want to go back. There’s a sexual dynamic to her return to that office, and Trump knows this. He wouldn’t be enjoying it so much otherwise.”

“It’s as if the candidates have reversed gender roles.” she continued. “Hilary is collected, almost stoic. To him, she’s a target. He’s not running to be president, he’s running to be up against her. Eight years ago people trashed the idea of a woman for president on the basis of her potentially being too emotional, but Trump is the one acting out the stereotype of a hysterical, undone woman. Look how concerned he is about his hair—nobody can get anywhere near it! And his huge red tie is like a big dick. His salmon-colored face projects an afterglow—from chewin’ on that big ol’ dick around his neck.”