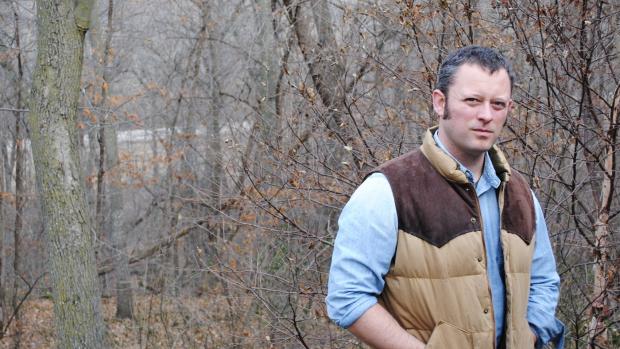 Benjamin Percy has always been drawn to genre writing. His childhood and teen years were filled with stories of dragons and their slayers, vampires, werewolves, chain-smoking detectives, and rugged cowboys. He was barely even aware that there was another kind of storytelling before taking a creative writing class.

“That, to me, was storytelling,” Percy said during a recent phone interview with The Public. “Stories were about vampires and dragons and robots with lasers for eyes.”

After being introduced to writers like Flannery O’Connor, Sherman Alexi, and Tim O’Brien, Percy fell in love with those works as well, but his passion for genre has never left him, as is evidenced in his last two novels. Red Moon is a tale of werewolves living among us, and the geopolitical tensions their existence creates as the US government tries to suppress rogue factions of the group. His latest, The Dead Lands, follows a retelling of the voyage of Lewis and Clark, as they make their way through a post-apocalyptic hellscape filled with giant albino vampire bats and massive spiders on their way to the coast.

Percy, who also writes for comic books and television, will be in Buffalo to discuss his work (with a focus on Red Moon) on Wednesday, October 14 at Resurgence Brewing Company as part of the Buffalo, Books and Beer series. The Public spoke with him about balancing writing styles and assignments, his favorite time of year and the real reason behind his trip to Buffalo.

Buffalo, Beer and Books founders Brian Castner and Matt Higgins have been talking about how excited they are that they convinced you to sign on for their series. They’ve intimated that the driving force behind your agreement was food related. What’s the real reason for your visit? Buffalo wings, beer, and books are three of my favorite things. There’s also that Brian’s enthusiasm sold me on the audience that will hopefully be awaiting me and October is my favorite month. Halloween is my favorite holiday, so this seemed like a good opportunity to howl from the stage and frighten an audience.

On that topic, with your clear affinity for the occult, we’re wondering what life is like at your house this time of year. On October 1 we open up the tomb, as we call it in the Percy household. It’s the closet beneath the stairs that is crammed full of Halloween decorations. We are that house, the house that you slow down for and look at and say, ‘what’s wrong with those people?’ The house that has too many decorations. The house that looks like it belongs to the Adams Family or the Munsters.

Writing for so many different media and styles do things ever feel chaotic in your head? Is it refreshing in a way? I’m excited to hit the keyboard every day and I’m never stuck, because when I do hit a roadblock, say in a novel that I’m working on I go write a comic strip or I go write an article or I go write a short story or I go write a movie script. Then I return to the novel with refreshed excitement and better perspective. It makes me better, I think, because I discover, in other genres and other platforms, different ways of communicating a narrative.

Percy will appear at Resurgence Brewing Company October 14 at 7pm. University at Buffalo professor Andrew McConnell Stott, author of The Poet and the Vampyre, will be the local author for the talk.