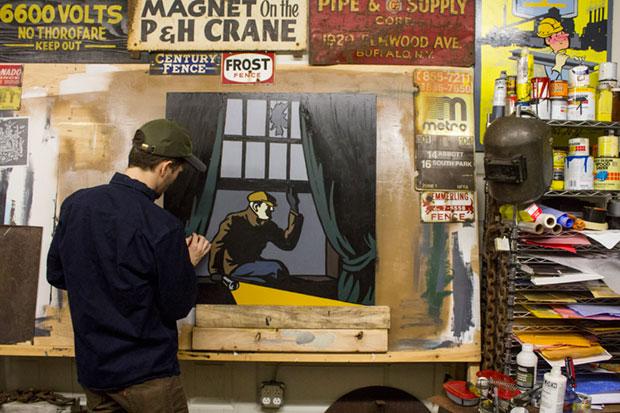 This being your first solo show, it’s safe to assume that very few people in Buffalo will recognize your name or resume as an artist. Having known you for over a decade, however, I know that despite you not showing publicly, you’ve been creating work for most of your adult life. Can you explain a bit of your background as an artist, as well as why you are now choosing to show work in a gallery?

I consider myself a self-taught painter and sculptor. During the late 1990s I was introduced to various facets of the art world through some of Buffalo’s underground cultural scenes. This period of time in the city was very pivotal for me…I was involved in making music at a young age and ended up spending a lot of time in environments that permanently engrained in me an alternative perspective of our world and society. I had never studied art academically, but I have been very fortunate to work both for and alongside many accomplished artists over the years. I feel this has helped to put me on the right path in terms of producing work that I’m proud of. I’ve been creating various bodies of traditional artwork for at least a decade, but at this point I invite people to pass judgement based on this show and the work I produce from here on out. It is my desire to approach my transition into a more traditional gallery art setting with a clean slate.

I met John Fatta [Eleven Twenty Projects, Argus Gallery] at random a year or so back and he had expressed interest in my work. I broke down the premise of what I was trying to accomplish with this project in conversation one day, and he offered to exhibit the series at Argus Gallery.  Frankly, I’ve always worked on my own terms and in general despise any sign of red tape. That, combined with the fact that i’m an unknown “new” artist, left me with low expectations of a gallerist having much interest in what I was bringing to the table. To my surprise, John seemed genuinely interested and excited to show my work and i’m grateful for the opportunity.

The title PROWLER THIEF INCENDIARY as well as the promotional imagery obviously have a very dark connotation to it. This isn’t something you generally see pertaining to gallery shows in Buffalo.  Could you give a little background on the work itself, as well as the need to portray it in a somewhat morose light?

I’ve documented and collected industrial signage for years. Over time the focus of my collection began to turn to fence manufacturer’s signs, which are small metal plaques, often with very unique lettering or illustrations, that are clasped onto a fence after installation. Out of habit, I found myself doing research into the history of these companies, tracking down printed logos and advertisements.  While looking through some microfilm, I discovered an advertisement by a national fence manufacturer that really left an impression on me. The advert featured an illustration of a man, bound and distraught, being rescued by police officers in a ransacked office. Among other text, it read in bold print: “THERE WAS NOTHING TO KEEP THEM OUT!” and below: “How can you keep out the prowler, the thief, the careless trouble maker, the possible incendiary?” At first I thought that this bizarre ad was surely a one-off, however, as I dug a little deeper, I came across entire advertising campaigns from different security related industries that were equally as intense. Countless fence companies, insurance companies, and lock manufacturers were running ads in various magazines from the 1930s up until the ’70s that were of a similar ominous nature. Essentially, they were artistically rendering terrifying, life altering scenarios in order to sell their products. Obviously we’ve all been exposed to various forms of historical propaganda over the years, but to me this representation of the common thief was a very interesting example of exploiting human maliciousness in consumerism. I began making paintings based upon both the visual and written content of these ads, and over time it began to expand into what I hope can be perceived as a cohesive series. All of the work in this show is directly related to fences and the psychology behind property protection, burglary, and fear. The title of the show and the promotional imagery created for it perfectly capture the tension that initially peaked my interest.

A viewer unfamiliar with the context of the show could easily perceive some of these paintings as being rusty signage removed from an old factory, or printed matter from decades ago discarded in an industrial basement. After a careful examination however, almost every piece shown is meticulously hand painted. Why did you choose to present the material in this way, and how important is this to your process?

That’s very true, and to be honest, until you mentioned it I was oblivious as to how easily that misconception could occur without clarification. It’s my opinion that in general things made by hand, rather than machine, often result in an end product that provokes far more emotion. There are obviously certain times where practicality overshadows this, but with this body of work, I felt it was necessary to avoid machine printing anything. I made a conscious effort to present everything in a very unrefined manner in order to accentuate certain sentiments.  All of the paintings are done on primitive wooden signs, not canvas. I don’t use tape to make straight lines, or attempt to perfectly replicate a font to the point where it loses all character and becomes something straight out of a book. It’s all meant to be very raw. When I look at a painting, I enjoy seeing the hand of the painter, translated into visible brush strokes and imperfections. I’m a huge fan of Charles Sheeler, Charles Demuth, Frank Stella…artists whose technical ability is extremely humbling, but at the end of the day, the majority of the artwork that has been an influence on me possesses a more crude technical quality.

The artists you just mentioned all more or less worked in the same time period (1930’s-1970’s), as the advertisements you based this show on. Probably a coincidence, but is there something specific about this era that resonates in you and what you are trying to achieve in your work? Who would you consider to be your major influences as a painter?

I suppose you could say I do have a sense of affection for the early to mid 1900s, but I refuse to fall into the cliche “I was born in the wrong era” mindset that is quite common among my generation.  In addition to traditional art, architecture and industrial design from this period have definitely influenced a lot of my other work outside of this series, as well as an appreciation for outmoded building and art making material.

In a museum or gallery, I find myself gravitating toward representational paintings that possess imperfect or slightly abstracted qualities. Most of the books on my shelf center around Cubism, Modern, and Surrealism; Juan Gris, Giorgio de Chirico, Fernand Léger, and Stuart Davis are favorites. Francis Criss, Emory Douglas, Philip Guston, and Jacob Lawrence are also extremely influential.

Shortly after the closing of this exhibition, you and I have a split show at Big Orbit on November 25, which is another large body of unseen work. Do you plan on continuing to show this frequently? What are your artistic goals at this point?

I’d love to show regularly, but i’m spread pretty thin at this point. After these two shows I’ll be busy with a few other projects currently in the works. I would really like to start creating more public installation based sculptural work, but I anticipate that to be an uphill battle. Everything I do is self-funded and I don’t expect that to change anytime soon. The realization that my artistic output is reliant on making financial sacrifices that directly affect my quality of life is a tough pill to swallow, but this obviously isn’t something that is unique to my experience. Most serious artists endure self-imposed miseries in one way or another. If I can continue to stay above water and produce projects that have some teeth to them I will be content.