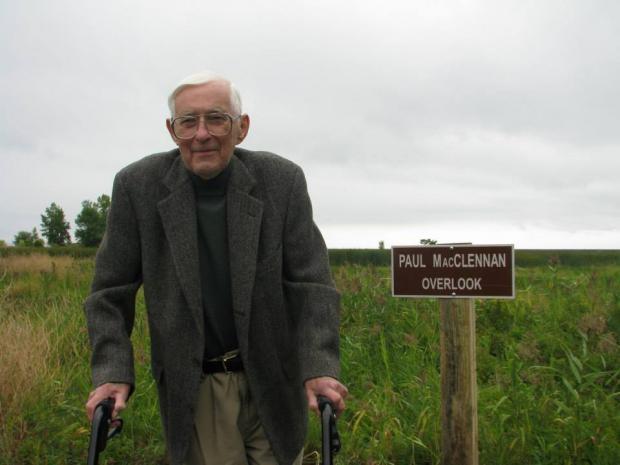 Former Buffalo News environmental reporter Paul MacClennan at the dedication of the Paul MacClennan Overlook at Times Beach Nature Preserve in 2014. MacClennan passed away last week at the age of 91. Photo by Jay Burney.
by
Jay Burney
/ Oct. 18, 2017 8am EST

Paul MacClennan, who died last week at 91, was the last environmental reporter for the Buffalo News—and he was a champion of environmental causes for decades

Once upon a time the Buffalo News had a full time environmental reporter. That person, Paul MacClennan, passed away October 2, at the age of 91.

He retired in 1991 after a last few years when the paper, and many newspapers, were transitioning from a community-interested benefit to a corporate business. At that time he told me that he would probably be “the last environmental reporter” because of that transition.

Many of us in Buffalo were proud that our newspaper would support such a position. Paul became the foundation of local, regional, and national environmental activism and empowerment.

The commitment to an environmental reporter by the Buffalo News paid off. Paul was able to break critical stories, including Love Canal. His persistence and tenacity helped to reveal to the world the awful truth about what would be characterized as a coverup by state and federal authorities that included the building of a housing complex on the site. Paul published an astounding 300-plus pieces on Love Canal from the 1970s to the 1990s. He also covered the closing and resulting contamination legacies of Bethlehem Steel, and the degradation and partial recovery of Lake Erie due to phosphate and other pollutants. Paul articulated a human perspective to environmental reporting in that he reported on the human impacts and put a human face on issues. You may have heard, for instance, of Lois Gibbs? Paul was her champion, and you would not have heard of her if not for him.

During his long Buffalo News career, which began in 1953, Paul covered a lot of territory.

He covered the Attica uprising in 1971. He was one of a few pool reporters who went inside the prison during the uprising and interviewed prison leaders. For 10 years he was president the Buffalo Newspaper Guild and fought for and helped to establish many rights that workers enjoyed for years. For more about Paul’s astonishing career, visit the Buffalo News obituary published on October 6.

During the final years at the News, he charted new territory by authoring an environmental opinion column. He covered local environmental activists and issues. This is when I first met him.

I was working as the environmental editor for the local Buffalo Alt Press newspaper. I had a regular column called “Eye on the Environment,” which was deeply inspired by Paul’s work. I was also organizing. I began working as the executive director of the Buffalo Institute of Urban Ecology, Inc. in the early 1990s. I was able to create a series of roundtables that I hosted in the Georgian Room at the Statler, and at the Buffalo Museum of Science. Paul covered them, promoted them, and promoted me. The roundtables hosted some pretty significant national events, including the unveiling of the first National Climate Assessment (“The Future of the Great Lakes”) and had as our guest speaker the director of the President’s Council on Environmental Quality. We also hosted the Buffalo Tree Summit, which began the first post World War II movement to restore Buffalo’s vanishing urban forest. We hosted the Buffalo Pesticide Summit, which began to establish non-toxic and native plant parameters for both homeowner lawns and gardens. You might not have garden walks today if we had not fought against toxic and monocultural lawns. The summit also advocated for the reduction of the use of pesticides by the city, including parks and streets and Buffalo’s public schools. It was an epic battle, and, thanks to Paul, we won. One of the results was the creation of a City of Buffalo Pesticide Management Commission. Another was the establishment of a City of Buffalo Office of the Environment.

Throughout all of this was the gentle hand of my friend and mentor, Paul MacClennan.

He became very active in helping to develop and manage the environmental roundtables. He and I started and co-chaired a leadership group that Paul named “the Revolutionary Council.” This group met regularly, often at Towne Restaurant on Allen Street, sometimes at the Statler. Today many of those members of the leadership group continue to work in this region—David Hahn-Baker, Nancy Smith, J. D. Hartman, Gary Carrel, and Joe Schmidbauer among them. This group was the predecessor of today’s Western New York Environmental Alliance.

Paul and I had a lot of similar interests, not the least of which involved the appreciation and conservation of nature. During the early 1990s Paul, Buffalo Common Council President George K. Arthur, Dr. Robert Andrle (one of our region’s great ornithologists), and I began working on the protection of a site on Buffalo’s Outer Harbor. The site, Times Beach, was becoming more recognized as an essential site for migrating and breeding birds. Paul wrote about the site, and this helped to galvanize public interest and support. We created the Times Beach Oversight Committee, which Paul and I co-chaired. We became officially recognized as a citizen group, through legislation, by both Erie County and the City of Buffalo. This group, which has since morphed into the Friends of Times Beach Nature Preserve, was the foundational force behind the 2002 creation of the Times Beach Nature Preserve. Our work played a significant role in the creation of the Niagara River Globally Significant Important Bird Area. Today, the group remains active and engaged with the protection of Times Beach and the appropriate development of our Outer Harbor. You can thank Paul MacClennan for this.

In the late 1990s, Paul asked me if I would like to partner with him on the development of a print newsletter. I was more than thrilled to work with him on this venture. The concept was to directly target elected officials at the local, state, and federal levels with insightful reporting, essays, and profiles of people, places, and things. We named it “GreenWatch” and published about two dozen monthly issues before Paul decided it was time to hang it up. He told me that he wanted to “take his retirement seriously.” And so he did.

I did not see him that often after that. But in 2014 I was able to coax him into coming down to Times Beach, where we held a ceremony and unveiled a plaque that dedicated the main overlook at the Nature Preserve as the “Paul MacClennan Overlook.” Despite his obvious ill health, his broad smile showed me that he deeply appreciated this recognition.

I have never stopped publishing GreenWatch. For a long while it appeared in Alt, Artvoice, and on an online blog. Since its inception almost three years ago—and the nearly concurrent abolition by the Buffalo News of its Sunday Science Section and the firing by the News of outdoor columnist Gerry Rising—The Public has kept the column as a regular online feature. You can see our most recent columns, dedicated to Paul, at dailypublic.com.

​Thank you, Paul for always being an inspiration, a teacher, and a guiding hand. You have always given us a reason for hope.

Jay Burney is contributing editor on environmental affairs for The Public.