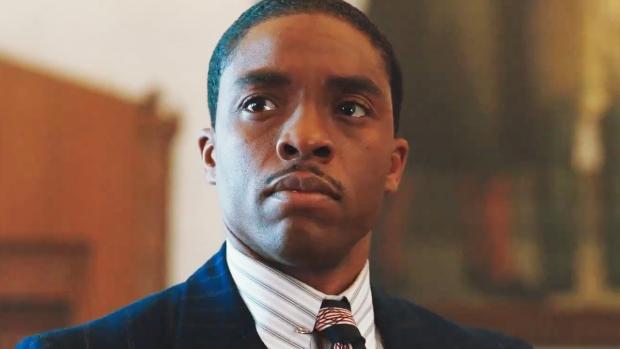 Let’s dispose of first things first: Buffalo’s City Hall gets its close-up in Reginald Hudlin’s Marshall, and it looks fine. The striking, amusing faux Egyptological inflections and the Art Deco façade are there repeatedly, although it could have made more of an impression if Hudlin had moved his camera back and shown more of its 32-story elevation and symmetry. City Hall is standing in for a Connecticut superior court building, and across Niagara Square, the old federal courthouse supplies courtrooms and corridors. There are a number of other Buffalo buildings featured in Marshall, including the Central Terminal’s capacious interior, but there isn’t really much visual sense of the city, which is subbing for Bridgeport, Connecticut. Hudlin provides some period details, circa 1941, but he isn’t much for careful scene setting. Also, Marshall is predominantly a courtroom drama, and a lot of it takes place indoors.

The movie is about a courtroom battle and a legal defense of an African-American man, Joseph Spell (Sterling K. Brown), accused of raping a white woman. His defense was conducted by Thurgood Marshall, who a quarter-century later would become the first African-American justice on the US Supreme Court. The filmmakers have moved the case about 20 miles southwest from Greenwich to Bridgeport, Connecticut, for no obvious reason. And before the proceedings even begin, they issue that notorious consumer warning, “Based on a true story.” If you assume that means Marshall doesn’t really tell a true story, you’re right, at least to some extent. Hudlin and screenwriters Jacob and Michael Koskoff have jiggered the facts, and added complications and narrative tensions. In movie terms, their story is better than the real one, and Thurgood Marshall’s impressive life and career aren’t insulted by some Hollywood hyperbolizing.

In 1941, Marshall (Chadwick Boseman) was the 33-year-old lead attorney of the NAACP, and sometimes the only available one. He spent much of the 1940s traveling the country trying to put out brush fires of official racial injustice and cruelty, and the Spell case, in effect, just represented another of these challenges. (At one point the movie’s Marshall tells someone he doesn’t want to fight fire, but to end it.)

A local socialite (Kate Hudson) has accused her chauffeur, Spell, of raping and trying to murder her. Sent by the NAACP to defend Spell, Marshall must hook up with a very reluctant local attorney, Sam Friedman (Josh Gad), who’s needed to sponsor Marshall’s temporary admission to the Connecticut bar so he can appear for his client. This application is rejected by a plainly unsympathetic judge (James Cromwell), and Marshall must conduct his defense through the very alarmed Friedman, who has zero criminal defense experience.

Hudlin has directed the fairly melodramatic but skillful script in a boldface, punchy style. Boseman now has a sort of hat trick, having played three famous American black men. (The two others are James Brown and Jackie Robinson.) His Marshall has a breezy, almost wiseacre charm, a little like a P.I. in a 1940s hard-boiled detective novel or movie. It’s not subtle, but the actor eventually gets his softer moments, and the real Marshall reportedly could be gregariously affable and funny.

But the most effective portrayal in the movie is by Gad, as the initially hapless Friedman, unexpectedly immersed in his first criminal case, wanting to quit but nagged by his conscience and intimidated by his dominating “co-counsel” and the object of the percolating anti-Semitism of the era. The material isn’t entirely persuasive, but Gad makes it seem more so.

Marshall isn’t much more than a sidelight or footnote to a famous man’s life. It really says more about America and its deplorable historical legacies than about Marshall. And need I mention its relevance has been made more apparent in recent days?