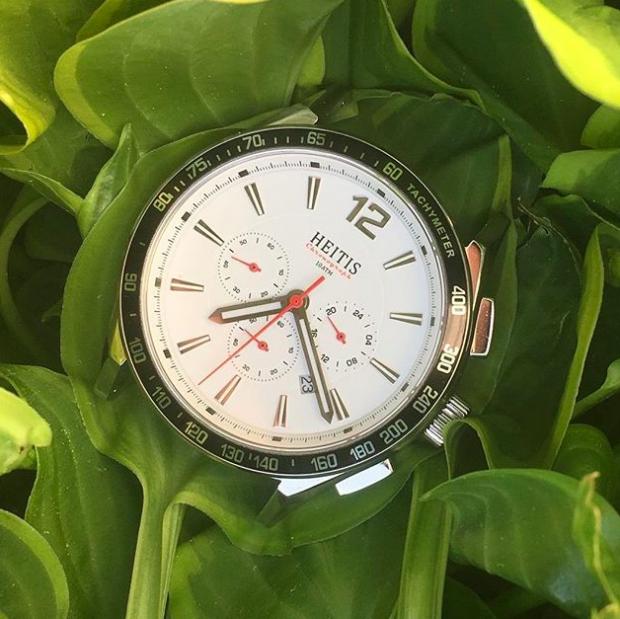 The Heitis Chronograph—a Buffalo-designed example of the microbrand movement in the watch industry.
by
Allen Farmelo
/ Oct. 18, 2017 8am EST

It seems nearly impossible, but the American watchmaking scene is now dominated by a flurry of micro-brands. Typically run by just one passionate person, these little watch companies resemble local distilleries in their regional identities, their intimate attention to detail, and their small production numbers. It’s an exciting development that brings what is often an extravagant luxury good straight down to Earth—perhaps right into your neighborhood.

No illusions, however: While quaint on the surface, American watch micro-brands operate in a complex global economy, and they struggle with America’s post-industrial situation as much as any company. A cursory history of America’s watch industry—a story that parallels the rise and fall of so many industries in the USA over the past couple centuries—will help us understand how micro-brands operate today and why they cropped up.

Until the mid 1800s, the Swiss, British and French led watchmaking. In 1850, the company that soon became Waltham Watches formed in Massachusetts as the first serious American watch manufacturer. Waltham excelled at mass production of interchangeable parts, setting them ahead as a mass producer of affordable watches. Other similarly industrialized American watch companies soon followed, most famously Hamilton, Bulova, and Timex. For close to a century, American watchmakers kept pace with the Europeans—at least in quantity, if not always quality.

Like many mechanical industries, American watchmaking stumbled and eventually fell on its face during the second half of the 1900s. By the 1950s, the Federal Trade Commission was hounding Waltham and other firms for falsely advertising “American Made,” as they had shifted production largely to Switzerland (the FTC similarly busted Detroit’s Shinola in 2016). Part of this shift to Switzerland can be attributed to World War II having forced USA companies to retool for production of military watches while simultaneously forgoing metal consumption. Meanwhile Switzerland, who remained neutral in the war, mostly carried on normal production and came to dominate watchmaking globally.

Then, late in 1969, Japan’s Seiko released the first quartz watch—a very precise and affordable battery powered watch, not a wound mechanical one—and the rest of the watch industry fell into The Quartz Crisis. Dozens of Swiss watchmakers faltered and flopped, and of the few remaining American watchmakers, nearly all found themselves bankrupt and irrelevant. A couple American brands (notably Timex and Bulova) adapted and survived, but an actual American-made watch—as in: American workers physically making them on American soil from American stuff—became extinct as manufacturing continued to move overseas through the 1970s and 80s. Like so many industries here, true American watchmaking was dead by 1980.

Suddenly, in the late 1980s and early 1990s, mechanical watches came back into vogue. Mechanical watches were anachronistic wonders, a balm on our newly digitized lives. They were status symbols, bigger and bolder in design with sapphire crystals on the back showcasing their elaborate—and often expensive—inner workings, called movements. Quartz movements lacked soul, a beating-heart, and the allure of elite craftsmanship. Famously, the Swiss brand Blancpain—a company that collapsed in 1970 due to the Quartz Crisis—reopened its operations in the 1980s while bragging: “Since 1735 there has never been a quartz Blancpain watch. And there never will be.” The Swiss mechanical watch was back, and by the 1990s the mechanical watch industry was booming.

In America, however, there simply wasn’t the infrastructure, skilled labor, or the vision and passion required to spark a revival. We could also blame the streak of Republican presidents and their ongoing deregulation of what constitutes an American corporation (i.e. not much) as the US rapidly de-industrialized (Switzerland is rather regulatory, by comparison). Globally, mechanical watches were selling like hotcakes, but Americans were not making them.

Confusingly, Swiss conglomerates bought up American labels like Hamilton and Waltham and started selling them back to us as “American” watches. Apparently we either don’t care, don’t know, or willingly turn a blind eye to the actual origins of these watches. This type of false-ish branding is now normal for all kinds of “American” products. Chevy isn’t truly American-made, either, but loyal Chevy drivers will defend the brand’s American heritage to the last mile. Coincidentally, you can now buy a Swiss-made Chevy-branded watch—for real—it gets confusing. The short version: American watches haven’t been Made in American for many decades.

More recently, brands like Seattle’s Filson and Detroit’s Shinola (the latter a Rust Belt revitalization success story) began booming by catering to those who crave American-made stuff—a noble enough pursuit. Sadly, Shinoa (who also made Filson-branded watches) got busted by the FTC for mis-representing their manufacturing as “Where America is Made”—some slippery sloganeering George Orwell might have deemed Newspeak. Indeed, there is a huge difference between assembling a few foreign-made parts and actually making a watch—or a shirt, or anything—from scratch on American soil from American materials.

What’s liberating about this somewhat scammy situation, however, is that a slew of micro-brands have emerged on the American watch scene with a more earnest and honest approach. Effectively doing exactly what Shinola has done (assembling sourced parts), micro-brands do it smaller, cheaper, often better, and with full transparency. Typically one-person operations, the individual entrepreneurship feels like Ben Franklin’s America set within a globalized economy. The micro-brand watch scene is filled with entrepreneurs of all ages slugging it out in an emerging marketplace of their own making.

Let’s be clear, though: Micro-brands are really watch designers, not makers. Other than a couple examples, all American micro-brands are sourcing parts overseas: China, Switzerland, Italy, Japan, Hong Kong, etc… Some micro-brands offer mechanical watches; some offer quartz; some both. Some assemble the watches themselves in the USA; some no. Some QC the watches here; some do so overseas; some don’t bother. Most ship the watches themselves; a few never touch their products. Some micro-brands crowd-fund their way into existence; some self-fund. Some make limited editions that sell out in pre-order; some are in continuous production, ready to ship. However they configure their companies, micro-brands constitute the closest thing to a vital and rising American watch industry since the 1930s.

Watch movements are one of the most complex mechanisms humans have ever conceived, so we can’t really fault micro-brands (or even Shinola) for outsourcing them. Building movements in large quantities requires precision tooling on an impossibly small scale, highly esoteric know-how, and sterile factory conditions. Conversely, small-shop, hand-made movements typically cost tens of thousands of dollars and can take months to build. Even high-end mega-brands like Omega, IWC and Cartier start some models with “off the shelf” movements that they then customize. There’s a big difference between what a one-person micro-brand and a mega-brand like those can do, of course, but there is no shame in any sized company using quality pre-fab movements. The shame would be to BS about it.

A big part of the excitement of micro-brands is that you can get a watch that’s “from” (if not “made in”) your hometown or region. You can talk to the company owner, get hands-on service and information, and you can own a watch that carries a regional identity. Next week we will profile Buffalo’s own micro-brand, Heitis Watches.

Keeping track of all the micro-brands is not easy, but there are a few spots to delve in and explore. Of course, the phenomenon isn’t exclusive to the USA, so finding an American-only list isn’t easy, but the resources below can get you started.

Grab a micro-brand watch and enjoy the special buzz that comes from owning something unique, regional, and honest enough to avoid the FTC’s bullshit detectors.

UP NEXT: A close look at Heitis watches of Buffalo, a local microbrand making a big name in the watch industry.