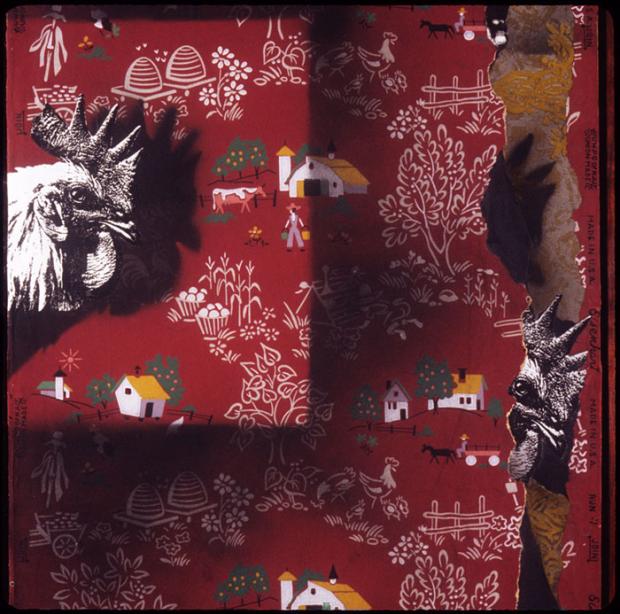 From the collection of Gerald Mead, works by artists affiliated with Villa Maria College, 1975 to the present

The current display at the Villa Maria College gallery provides a précis view of the variety and quality of a half century of art instruction at the college. Works by two score and more former and current Villa art department faculty members and advisors, art entirely from the Gerald Mead collection.

Art instruction got going at Villa in about the late 1960s, according to current faculty member and gallery director Brian Duffy, who is represented in the show by a small abstract collage. He said the first art teacher at the institution was Carlos Nisita, whose work in the show is a little intaglio print, dated 1931, entitled A Buffalo Church (Annunciation R.C. Church, on Amherst Street—the two steeples—seen from the other side of Scajaquada Creek, Buffalo State College land apparently).

Another early days instructor was Jim Jipson, represented by a strange little mixed media work including kitsch religious statue night light, largely concealed behind a smoky plexiglass panel, further obscured by multiple overlays of near totally illegible print. Another was Andy Topolski, represented by one of his lovely but inscrutable deep dive into particle physics works.

Among more contemporary production, some enigma variations. By Michael Bosworth, one of his signature photos in which up is down and down up. The subject matter little constructed landscapes underwater in a fish tank, upside-down because photographed upside-down, that is, with the camera upside-down, but reverse doubled right-side-up in reflection in the water surface, viewed from below. Playing on ideas about how the eye works—seeing upside-down—and the mind works—rectifying to right-side-up. And floods and other natural disasters to which human activities have lent an accessory hand. The piece on display is from 2010, so with possible reference then to Katrina, additional reference now to Harvey, Irma, Maria, etc., etc. Also Mark Snyder, his portrait photo of somebody unknown under a white hood complete head cover, copiously bound around with twine and spattered with black ink or paint. Evoking torture horrors—religious, political—in an historical line from the Spanish Inquisition to Abu Ghraib.

And paintings. Patrick Mills’s Copy of Surprise, depicting variations on the magician’s trick of which shell the pea is under, or bird in this case, visible under one of three upturned cups or glasses. A work about illusion and transparency, in oil point reduced to a thinness approaching translucence. Oil paint like watercolor, like chalk. While nearby, Sara Zak’s Measure for Measure, depicting measuring instruments—a straight edge ruler and arc component device of unclear function and purpose—in style and technique emphasizing tactile values. And Amy Greenan’s stark, near minimalist, portrait in profile entitled, strangely, Study for Lady Godiva’s Operation.

And Charles Agel’s mystery photo and accompanying mystery story about discovered object array ruins somewhere in the Southwest United States, or maybe Mexico. “Climbing over the ruined top…we reached a terrace [so] overgrown with trees…that at first we could not make out its form…steps ornamented with sculpture, and on the south side…a colossal head, evidently a portrait…we strove in vain to penetrate the mystery…who were the people who built this city…savages never carved these stones. We asked the Indians who made them…their answer: ‘Quien sabe?’ ‘Who knows?’”

Much more. The current and former faculty and advisors show continues through October 27.