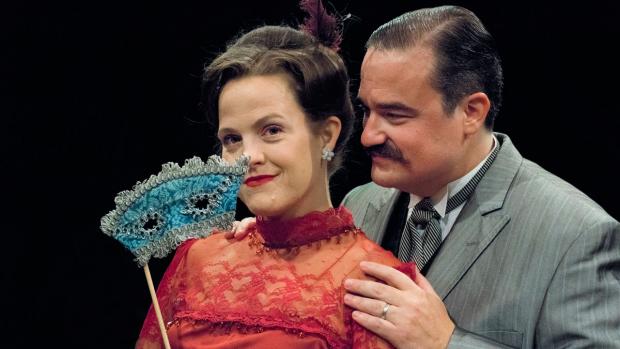 Jenn Stafford as Desiree Armfeldt and Matt Witten as Fredrick Egerman in A Little Night Music at the Irish Classical Theatre. Photo by Gene Witkowski.
by
Douglas Levy
/ Oct. 7, 2015 12am EST

The song “Send in the Clowns” has enjoyed a life of its own apart from the musical from which it is drawn, having been covered more than 80 times, including by the likes of Barbra Streisand, Judy Collins, and Frank Sinatra, who called it “a perfect marriage of words and music.” As magnificently wrought a jewel as the song is, you can only appreciate its true beauty and deep emotional significance when it is sung in the context of the second act of Stephan Sondheim’s A Little Night Music, brilliantly directed by Chris Kelly and produced by Irish Classical Theatre Company and running through October 18 at the Andrews Theatre. It is a showstopper and a reflection of all the ruminations on the expressions of love upon with the show is built.

First among these is maternal love, or in this case, grand-maternal love that the dowager Madame Armfeldt (the imperious Pamela Rose Mangus) has for her granddaughter Fredrika (the winning Faith Walh), whom she is caring for while the girl’s actress/mother Desiree (the abundantly talented Jenn Stafford) is on tour. For grandma Armfeldt, love is best limited to liaisons: Enjoy yourself but don’t leave without amassing a lot of gifts.

Standing up for jealousy is Count Carl-Magnus Malcolm (played with delicious verve by Anthony Alcocer), whose opinion of himself as a lover is only exceeded by himself as a soldier. He apportions his leave home to the minute, spending more of it with his mistress Desiree than his wife, Charlotte (the cannily long suffering Michele Marie Roberts), who is not the least bit fooled by him.

The anguish of the innocents, portrayed here by the 18-year-old Anne (the hysterical Renee Landrigan) and her not much older step-son Henrik (the self-loathing Ben Caldwell), are lost souls desperately in need of any assurance that love is indeed possible.

These characters spin like dervishes around stolid Fredrik Egerman (the steady Matt Witten), who in the course of the play manages not to consummate his 11-month marriage to Anne; further alienate his son Henrik; suffer the calculated seduction by the Charlotte, which leads to a duel with the count; and rekindle an old, unrequited love affair with Desiree. It is at that moment that we hear “Send in the Clowns,” a final comment on true love, lost opportunity, bad timing, and regret. Oh, if only we could have clowns to distract us from ourselves and make it light-hearted again, Desiree seems to be saying.

One might say that all the lovers, in their antic, high-strung characterizations, are the clowns, tangled up and seduced by the smiles of a summer’s night that, in Sweden, the play’s locale, never becomes fully dark. All these wonderful characters are a foil to Fredrik’s odd disengagement from them all. He doesn’t react to his madcap trophy wife Anne, or his son’s inner torment that compelled him to renounce love and study for the clergy. He doesn’t seem to care that Charlotte throws herself at him to inflame the irate count, nearly getting him killed. It is like this Fredrik is sitting things out. Perhaps a directorial decision, but one that puts him theatrically at odds with the concept for the rest of the characters; they being instantly identifiable types and whose vivacious energy bringing them to life is what propels the show, filling it with gaiety and moving it along so well that you hardly know where the time has flown.

This ICTC production is as insouciant and entertaining as a little night music, and at the same time packs all the crises that accompany love in its multitude of expressions with honest emotional depth. At the end, new pairings hint of happily ever after, or so we are allowed to think as we exit the theater humming that wonderful tune about clowns.