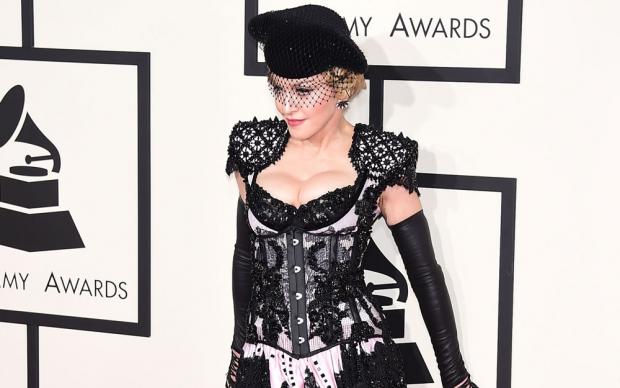 Sometime during the fall of 1983, I went to Musicland in the White Plains Galleria and bought a 45 of “Holiday” on a whim. I didn’t know the song, but for two bucks I took a chance. I was 13.

In the next few months, I wore out that little sliver of vinyl like no other I’d purchased that year. And I had help: My dad loved it too. I have amusing memories of us boogieing around the living room, putting up that year’s Christmas tree with my father’s souped-up turntable set to repeat. When my mom announced she had a headache, it was as if we’d succeeded on a mission. Gotta love the dysfunctional parental bonding.

I got Madonna’s first album that Christmas. As far as I’m concerned, it remains her crowning achievement. Even the best of her output since fails to eclipse the post-disco tour de force of that Sire debut, now 32 years old. It’s sexy. It has soul. It’s honest and groove-based, and the production is even a little scrappy in places, which gave her some underground cred at the time. The gays went apeshit.

Since then, I’ve always paid attention to Madonna. Some discs have been great (Bedtime Stories, Ray of Light, Music) while others have struck me as uneven and mediocre. The last decade has been surprisingly consistent—consistently lousy, that is. And yet, when I dare to utter such words out loud, other gay men get upset with me. Really upset.

Our refusal to openly discuss Madonna’s increasing lameness is curious to me. As a group of extremely critical, catty, and abrasive guys—so quick to throw others under the bus for fashion choices we disagree with or music/acting/art that doesn’t produce the desired “feels”—it’s odd that we can’t admit when Madonna lacks. It’s as if acknowledging her failing is personal to us, as if we’ve somehow failed.

Part of this is because she’s made a point of defending gays at every available turn. She’s been an ally from the beginning and her support hasn’t wavered. Maybe we feel ours shouldn’t either, but it’s nowhere near an even exchange: Despite her best efforts, Madonna doesn’t quite qualify as a civil rights movement.

Why can’t we tell the truth about Madonna? It’s okay to acknowledge when the mascot unleashes a stinker. Really.

This stubborn attachment to Madge also relates to AIDS, since she showed up at a time when things were grim and brought us together through the power of music. She offered us a joyous respite from the awful weight coming down.

In the ensuing fallout, haters used Kim Davis logic to fortify their hate while we suffered innumerable losses from a sexually transmitted plague. Madonna, in turn, took on the church. She had her own agenda for questioning old, tired ideologies, but our crusades overlapped.

Not long after that, she began playing with sexual taboo like never before, While our sex became a world of latex-laden anxiety, Madonna stumbled, seemingly medicated, down a hotel hallway in grainy black-and-white. Then she released a pornographic coffee table book. Her outlandish Erotica-era antics provided a vicarious thrill—at least someone was getting her freak on.

She also used the black-and-white medium as a vehicle to project intimacy via Truth or Dare, her Blond Ambition Tour documentary, which was effectively designed to make us feel like we were all her friends.

That was more than 20 years ago. And it was all an act. But that’s all it’s ever been. And Rebel Heart is where I draw the line.

When she goes on tour, the folks she works with really know how to help her bring her A-game, and her current trek (which is passing though Toronto as I type) is no exception. Less actual concerts and more spectacles, Madonna’s live shows are a dizzying array of elaborate sets, choreography, costume changes, lasers, video clips, pyrotechnics, and things descending from the ceiling. For a bunch of theater queens, it’s heaven in a tin dome. On stage, she works very hard to deliver something entertaining, fun, and, for some of us, life-affirming. Particularly for gay men, Madonna reminds us of who we are, where we’ve come from, and what we’ve achieved.

Maybe that’s where my big disconnect is. Because I was always in it for the music alone. The rest, to me, is just a distraction. So, the show, however entertaining, doesn’t cut it for me without a solid album behind it. Lately I feel like the victim of a bait-and-switch: She sold me on the tunes, then began offering me less music and more image.

When the tracks from Rebel Heart appeared online, I cringed.

The album’s concept is supposed to be one of personal reveal, but so much of Rebel Heart is over-calculated, soulless, and melodically challenged, it’s almost hard to believe there’s a person at the bottom of the noisy pileup. Is Madonna soulless? Is that what she’s really trying to tell us? Is she a fragmented mess, unable to produce something cohesive that’s a product of a sustained relationship with one producer? Taken as a reflection of her true personality, which is what the album is supposed to be, that’s what comes across.

“She worked on it with some of the biggest names in the business,” a friend asserted, blinking at me incredulously when I opined that Rebel Heart was a heinous, barking mess straight out of the gate. It’s a ridiculous assertion, as if to suggest that fame can save a project from creative failure. That only works if we all believe the lie.

Bottom line? From Timbaland and Timberlake to Diplo, Avicii, and Kanye, all the king’s horses and men have failed to coax the Material Girl into making an engaging, consistent record in years. Instead, we get half-baked ideas, half-cocked execution, and a ton of filler. It’s a good album, you say? How do you define that? Because the deluxe version of Rebel Heart is a bloated, unwieldy 19 tracks (the super deluxe is 23!), maybe three or four of which are above average. So, a good album is comprised of 20 percent above-average material? Get real.

“There’s a contradiction/And I’m stuck here in between,” she sings in “Wash All Over Me,” the final track of the non-deluxe version, touching on the project’s conceptual duality: the hellion vs. the romantic. But the ride to get there has been such a waste of time, it’s entirely too late for explanations.

The infuriatingly sing-song “Bitch, I’m Madonna” makes for a better urban nursery rhyme than a pop song. “Holy Water” sounds like she’s singing with plugs on her nose at the public pool, and the “Bitch, get off my pole” refrain seems little more than gratuitous vulgarity. (Madge might want to look into the way Peaches does this for a more effective approach.) She makes matters worse at the chorus: “Kiss it better, kiss it better/ Make it better, make it wetter (Don’t it taste like holy water),” which just isn’t sexy. Twenty-plus years ago it might have been shocking; now it reeks of desperation.

“Devil Pray” could have been so much more, but in the process of rattling off a series of redundant drug-related terms (“And we can do drugs, and we can smoke weed, and we can drink whisky/And we can get high and we can get stoned…”), she comes across as hokey and outdated, like you’re getting a pep-talk from a counselor who’s out of her element.

The free-association nonsense in “S.E.X”—”Chopsticks, underwear, bar of soap, dental chair”—succeeds at being unintentionally hilarious, while “Iconic,” featuring Chance the Rapper and Mike Tyson, is a bombastic joke that underscores just how silly Madonna sounds making assertions about who and what she is to us. She was infinitely more convincing when she showed us, rather than insistently telling us, which she does again and again on Rebel Heart.

With its gospel send-up and “I Will Survive” spirit, “Living for Love” hinted at a return to a flattering dance/house groove, but it’s the only truly stellar song in the whole set. Instead, we get hip-hop trappings galore, leaving her sounding one-dimensional, tacky, unemotional, and uninspired. The “sorry, not sorry” tone of “Unapologetic Bitch,” set to a synthetic shower of reggae beats, might be the one exception.

Her tireless pursuit of relevancy has ended up being her biggest liability, thus exposing an insecurity that’s frantically beating at the core of Rebel Heart. To use her own term, Madonna’s frozen. It’s certainly not too late for her to find some creative chemistry in a producer-cum-kindred spirit who will help her really shine, but all I hear on these tracks is a lot of misguided choices from someone busy putting on airs. Recognizing this for what it is made me sad. But I’m not going to lie to myself about the quality of the album just to avoid feeling that way.