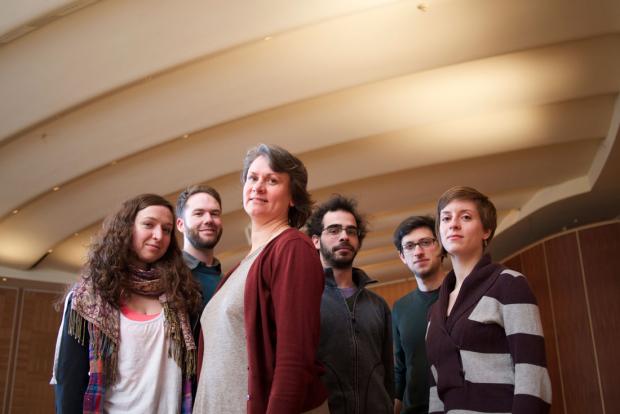 In A Kalevala Duo: Playing Bones, a new performance piece produced by Claire Schneider of CS1 Curatorial Projects, Lindman invites the audience onto the Kleinhans stage to witness the practice of Kalevala bone-setting, an ancient Finnish healing art. Healing spells were traditionally sung while treating a patient, adding a musical element to the hands-on therapy. The composers of Wooden Cities are among the very few Americans who have experienced this ancient practice, and they’ve drawn on tradition and their own experience in composing new music for the performance.

Lindman’s work has often examined social interactions in specific architectural settings, such as her saunas built for naked bathing by museum goers at MoMA’s PS1 and on MIT’s campus, as well as her video portraits of American sports arenas and of the temporary viewing platform constructed at the World Trade Center site after 9/11.

At Kleinhans, Lindman will work in a space with Finnish roots and significance for both Finnish culture and American architecture. The celebrated music hall was designed by the father and son team of Eliel and Eero Saarinen, and is perhaps the most significant of their joint projects. Eliel is known in Finland for his iconic Art Nouveau and national romantic buildings of the early 20th century, which contributed to the construction of a Finnish national identity and ultimately independence for the small country. When Eero was thirteen, the family immigrated to the United States; he later attended Yale and became known for his American neofuturist designs, including the St. Louis Gateway Arch. He became a naturalized US citizen in 1940, the same year that Kleinhans was completed.

In bringing the ancient techniques of Kalevala bone-setting to the stage, Lindman digs much deeper into the roots of Finnish identity and gives oral tradition and common peoples’ cultural practice an opportunity to stand alongside architectural giants. The Kalevala is the Finnish national epic, constructed out of fragments of oral poetry collected in the early 1800s, and containing a wealth of folk knowledge. While the compiled and edited literary Kalevala is central in Finnish culture to this day, not all aspects of the traditional culture it represents have been retained and treasured – and bone-setting is a practice that was nearly forgotten. A Kalevala Duo: Playing Bones is a fascinating opportunity to experience the high and low of Finnish culture in one unique performance.

A Kalevala Duo, Playing Bones takes place Sunday, October 11 from 6-7pm. The audience will sit on the Kleinhans (3 Symphony Circle) main stage with the performers. Tickets are $15 and can be brought through CS1 Projects here.

Christina Saarinen is a native Buffalonian with a degree in Finnish language and culture from the University of Helsinki. She is a translator and importer of Finnish books at backhomebooks.net.